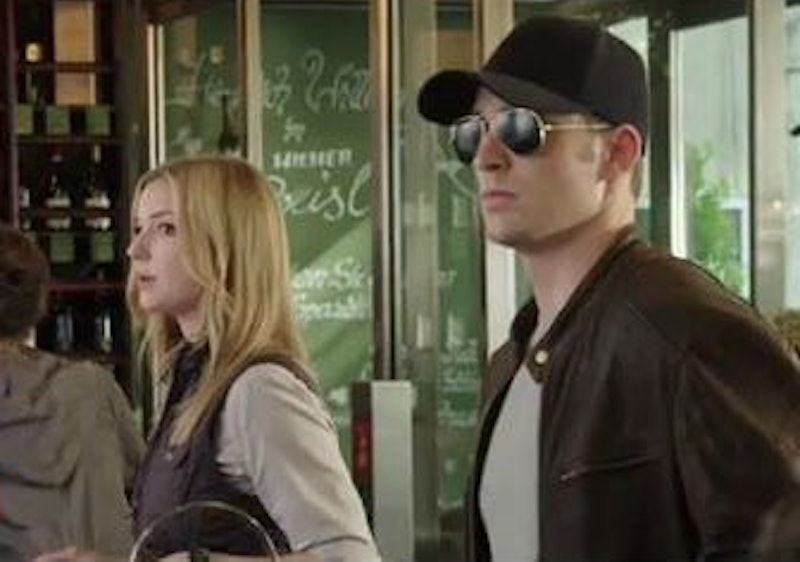 Although the Marvel Cinematic Universe isn't known for being much of a romantic destination, there have been a few notable relationships here and there. Tony Stark and Pepper Potts, Thor and Jane Foster, and even the much-maligned Hulk and Black Widow, and the most adorable couple, Captain America and Peggy Carter. But fans of the comics know that Cap has a history with another Carter, Sharon, and are wondering if the two will form a relationship in Captain America: Civil War. So, are Captain America & Sharon Carter together in Civil War ?

Cap and Sharon shippers will be happy to hear that there is definitely a lot of chemistry between the two in the movie; and the pair are much closer to each other by the end of the film than they were in the beginning. Cap and Agent 13, as she has been exclusively referred to before this film, had a flirty, if somewhat one-sided relationship in Captain America: The Winter Soldier. That begins to change in Civil War at the funeral for Cap's old flame, Peggy Carter, who dies of old age. Agent 13 gives the eulogy at the service for her late great aunt, and reveals herself to be Sharon Carter for the first time, both to the audience and to Cap.

Once this secret is revealed, the pair are brought closer knowing that they have something in common (you just have to ignore that Cap had a thing for Sharon's aunt). Sharon begins helping Cap on the down low, slipping him information to aid his efforts in finding out the truth about Bucky and the terrorist attack he was blamed for. In her last act in the movie, Sharon steals back the gear of Cap and Falcon from the government at great risk to herself and gives it to them before they do battle against Team Iron Man. This moment, as Cap is essentially about to head off to war, leads to a kiss between the two.

The movie takes a lot of what fans already know about Sharon from the comics (that she's a skilled S.H.I.E.L.D. agent, Peggy's niece, and Cap's love interest) and translates it to the big screen, but what about the other thing she's known for in the comics? At the conclusion of the Civil War comic book storyline, Captain America is assassinated. And while it's learned that Crossbones fired the shot that initially took down Cap, it's later revealed that Sharon is the one who actually killed him by shooting him in the stomach at close range immediately after he was shot by Crossbones (she was brainwashed at the time, obvs).

Thankfully, the film does not follow this storyline. No one shoots Cap in the movie, and no one brainwashes Sharon. They are both alive and well at the end of the film. However, since Cap is still a fugitive on the run at the end of the movie (and presumably, so is Sharon after betraying the government), it's not clear just when the two make out partners will meet up again. But given the chemistry the pair display in Civil War, a reunion definitely seems likely at some point.