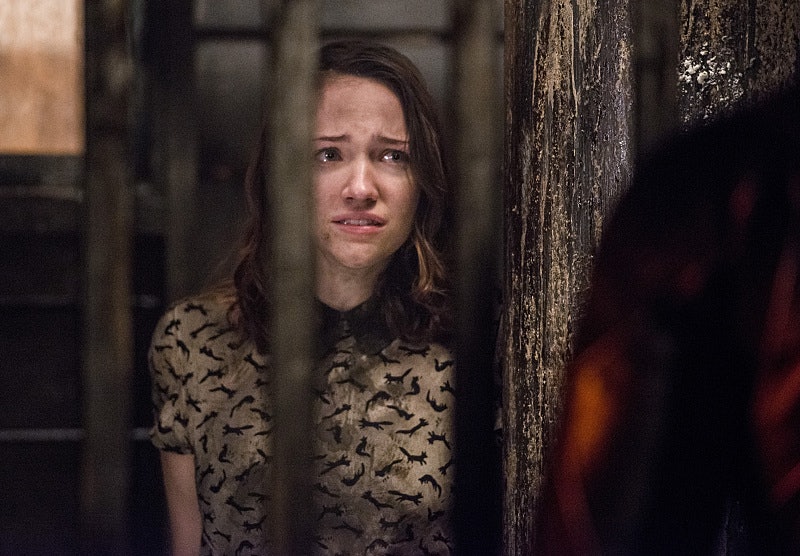 For a show about a heroic speedster, The Flash sure does have a deficit of good guys with the ability of super speed — but there have been plenty of evil speedsters throughout the show's first two seasons. Between Reverse-Flash, Zoom, and Trajectory, it's about time The Flash added some new speedsters to the side of good, and it may have done just that during the particle accelerator explosion in "Rupture." So, did Jesse Wells get powers from the particle accelerator on The Flash ? Although it hasn't been officially confirmed, I'd say the answer is almost definitely a "Yes."

As a refresher, the scene in question came at the end of "Rupture" when the S.T.A.R. Labs team was attempting to recreate the particle accelerator explosion in order to give Barry his powers again. Harry seemed to have all the calculations in order, but something went wrong and Barry sort of... dissolved, turning into a lightning storm of dark matter that sped through the halls of S.T.A.R. Labs and hit both Wally West and Jesse Wells. Now, that may not be concrete proof that both characters will turn into speedsters (especially considering Barry was given specific chemicals in order to recreate the circumstances in which he first received his powers), but let's talk about Jesse's comic book background.

Technically, there isn't a Jesse Wells in the DC Comics, but there is a superhero speedster named Jesse Chambers — who goes by the alias Jesse Quick. Jesse is the daughter of two other speedsters, Johnny Quick and Liberty Belle, and unlike Jesse's extremely protective father on The Flash, Johnny always wanted his daughter to get into the superhero business. Plus, Jesse Chambers has a history with Wally West since they both used the Speed Force to mentor a younger speedster. So, there are certainly plenty of similarities between Jesse Chambers and Jesse Wells.

However, although many think Jesse on The Flash is Jesse Quick, the show hasn't actually confirmed that connection, though there have been some not-so-subtle hints to it. For instance, during a flashback in "Enter Zoom," Earth-2 Harrison Wells says to his daughter, "That's my Jess, always so quick." Plus, in "Rupture," not long before Wally and Jesse get hit by the dark matter, he says to her, "You're pretty quick at solving unsolvable problems." To those who know about Jesse Quick's comic history, these are about as much confirmation as is needed to believe — perhaps without a doubt — that Jesse Wells on The Flash received the power of super speed when she was hit by the particle accelerator explosion.

Of course, we may have to wait and see how this all turns out. Based on the trailer for "The Runaway Dinosaur," it seems most of the S.T.A.R. Labs team's focus will be on bringing Barry back, and the episode synopsis released by Bam! Smack! Pow! is similarly devoid of any mention to Wally West or Jesse Wells. For all we know, Wally and Jesse could be in a coma like Barry was the first time he was hit by the particle accelerator explosion — or they could come to the team's rescue with their new powers from the Speed Force. But, if I had to guess, I'd definitely say that Jesse Wells will become Jesse Quick on The Flash, either sooner or later.