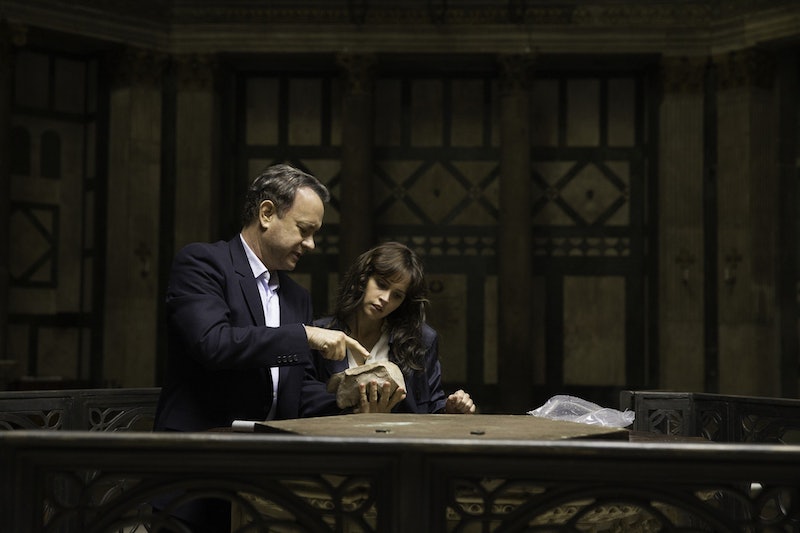 To date, Tom Hanks has located the Holy Grail and saved Vatican City from an antimatter bomb, first in 2006's The Da Vinci Code and then in 2009's Angels & Demons. Now, seven years after that second film, Hanks and director Ron Howard are reuniting for Inferno , the next in their series of movies adapted from Dan Brown's popular adventure novels. (Of course, this means they've entirely skipped over the events of The Lost Symbol, which is probably for the best.) The first official trailer for Inferno was released today, and it teases how Hanks' Professor Robert Langdon — with Oscar nominee Felicity Jones in tow — will race the clock to stop someone from throwing "the switch." But what is the switch?

The trailer opens with an ominous voiceover that tells us, "There is a switch. If you throw it, half the people on Earth will die. But if you don't, in 100 years, the human race will be extinct." That's right. This time, Langdon won't be saving just a single religious artifact or a single ancient city. Oh no — he'll be saving the entire planet from an extinction-level event. But what exactly is this event? As those who have read Brown's book will know, it is a genetically engineered disease that will randomly wipe out approximately half of the world's population if unleashed, created by a mad scientist in an effort to curb humanity's rampant growth and overcrowding of the planet.

Of course, this being a Robert Langdon treasure hunt, stopping this plague from being unleashed means following a trail of clues that all have something to do with Dante's Inferno. "I left you a path; the hardest one yet," the voiceover continues. "Only you can finish it. You are humanity's final hope." But humanity's hope for what? That he'll prevent mass casualties by stopping the virus? Or that he'll save the world by throwing the switch?

That's the conundrum that Langdon will have to face when Inferno hits theaters on October 28.