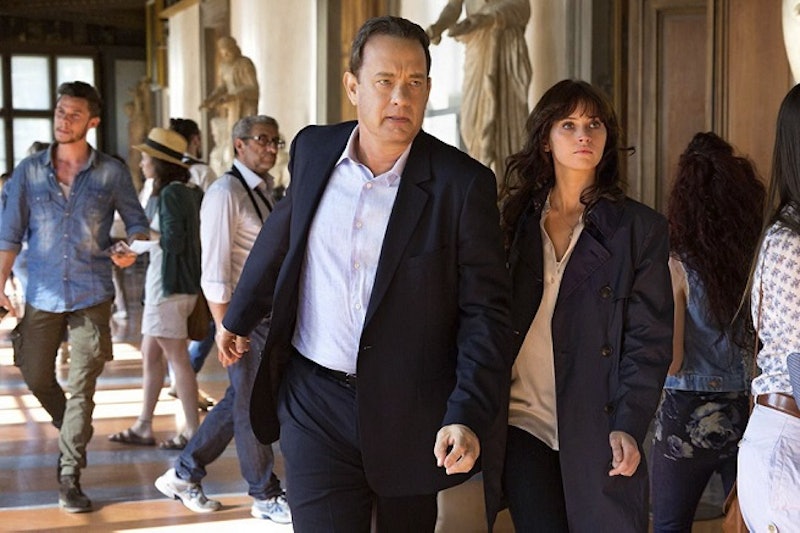 Did you know that Ron Howard and Tom Hanks were making a third movie based on Dan Brown's best-selling adventure/mystery/code-breaking/alternative history novels? No? Well, now you do! Following the semi-success of 2006's The Da Vinci Code and 2009's Angels & Demons, the director and star are once again teaming up, this time to adapt Brown's 2013 novel Inferno , which follows Professor Robert Langdon through Florence, Italy in an attempt to stop a madman intent on destroying the world with a deadly virus. You can glimpse Langdon's desperate race against time in the first promotional pictures of Inferno , just released this Wednesday.

It's a bit of a mystery how this franchise garnered a third entry, given how muted the response has been to the first two. Despite the controversy and buzz surrounding Brown's Da Vinci Code when it was published, the film did just okay, grossing $218 million off its $125 million budget; Angels & Demons did even worse, only taking in $133 million off its own $150 budget. (Neither of them did particularly well critically-speaking, either, earning only 25 and 37 percent on Rotten Tomatoes, respectively.) But before you dismiss Inferno too prematurely, consider that there might be at least a few reasons to be excited about the sequel.

Here are some hopeful signs that Inferno might be the best Dan Brown movie adaptation yet:

Tom Hanks' Da Vinci Code coif was the worst hair-related disaster since Felicity Season 2. Seriously, his locks were almost as luscious as his costar Audrey Tautou's mane of dark hair. (See above.) Thankfully, the design team decided to scale things back a bit for the sequel — but it's still a relief to see that they haven't gone temporarily insane and decided to revert to Langdon's unfortunate mullet.

2. Felicity Jones Is In

All the Robert Langdon books suffer from the tired cliché of giving their dashing hero a one-dimensional female sidekick, usually a startlingly brilliant scientist of some kind who also happens to be stunningly beautiful. Neither Tautou as Sophie Neveu or Ayelet Zurer as Vittoria Vetra were able to transcend their underwritten characters — but perhaps Felicity Jones will fare better as Dr. Sienna Brooks. She does already have an Oscar nomination, after all (for last year's The Theory Of Everything); AND she's going to star in next year's Rogue One: A Star Wars Story , so she must be good in an action scene, I assume.

In a strange coincidence, Inferno's cast list boasts not one, but two actors from this summer's Jurassic World. There's French actor Omar Sy (above), who played Chris Pratt's buddy Barry, and who will be playing Christoph Brüder, head of Europe's CDC, in Inferno. Then there's Indian actor Irrfan Khan, who played the park's CEO Simon Masrani, and who will be playing The Provost, the head of the ominously-titled Consortium who is helping the villain in his dastardly plans. If they can somehow help Inferno tap into a fraction of Jurassic World's boffo box office, I'm sure Columbia Pictures would appreciate that.

4. The Rest Of The Cast Is Great, Too

Oh, and there are other people in the movie as well. The film boasts an international cast including Danish actress Sidse Babett Knudsen (above) as the head of the World Health Organization and Romanian actress Ana Ularu as a deadly agent of the Consortium. Oh, and there's another American in the movie, too: namely Ben Foster (X-Men: The Last Stand, Lone Survivor, The Program) as the film's chief bad guy, Bertrand Zobrist, a scientist obsessed with Dante's Inferno — and with solving the world's overpopulation problem with a contagion, to boot.

5. It's Not The Lost Symbol

For some reason, Ron Howard has not been fussed with adapting Brown's novels in anything resembling a sensical order. He started with the second book, Da Vinci Code, which made sense at the time considering how popular it was, but then he went back and adapted the first book, Angels & Demons, as a sequel... and now he's skipping clean over the third book, The Lost Symbol, in favor of the fourth. This might actually be a good thing: according to Goodreads, users rated The Lost Symbol as the weakest of Langdon's many adventures, giving it a 3.63 out of 5. ( Inferno is tied for second with The Da Vinci Code , at 3.75, and Angels & Demons comes out on top with a rating of 3.82.)

6. They've Had Plenty Of Time

Only three years elapsed between the first two films in the franchise — a relatively normal time for in between sequels — but by the time Inferno is released next fall, it will have been almost seven years since Angels & Demons. What accounts for the long gap between entries? Oh, just a little indie film you may or may not have heard of called Star Wars: The Force Awakens . You see, Sony originally set Inferno for release on Friday, Dec. 18, 2015 — a date you might recognize as the day Star Wars came out in theaters and demolished all of the competition. When Sony realized what they'd be going head-to-head against, they wisely vacated the slot and pushed Inferno back to its current release date of Oct. 14, 2016 — almost a whole extra year! Surely they've had enough time to ensure Inferno will be the best movie it can be, right?

In any event, you have 10 months in which to study up on Dante's Inferno so you can crack all those infernal codes right alongside Tom Hanks in October. Ready, set, read!

More like this
'Bridgerton' & 'Succession' Casts Join Forces For A New Dickens Adaptation
By Darshita Goyal
You Can Finally Stream 'Ticket To Paradise' At Home
By Chloe Foussianes
Jodie Turner-Smith & Joshua Jackson's Relationship Timeline Includes Her Proposing
By Jake Viswanath
J.Lo Wants To Make A Sequel To This Movie With Ben Affleck
By Jake Viswanath
Get Even More From Bustle — Sign Up For The Newsletter