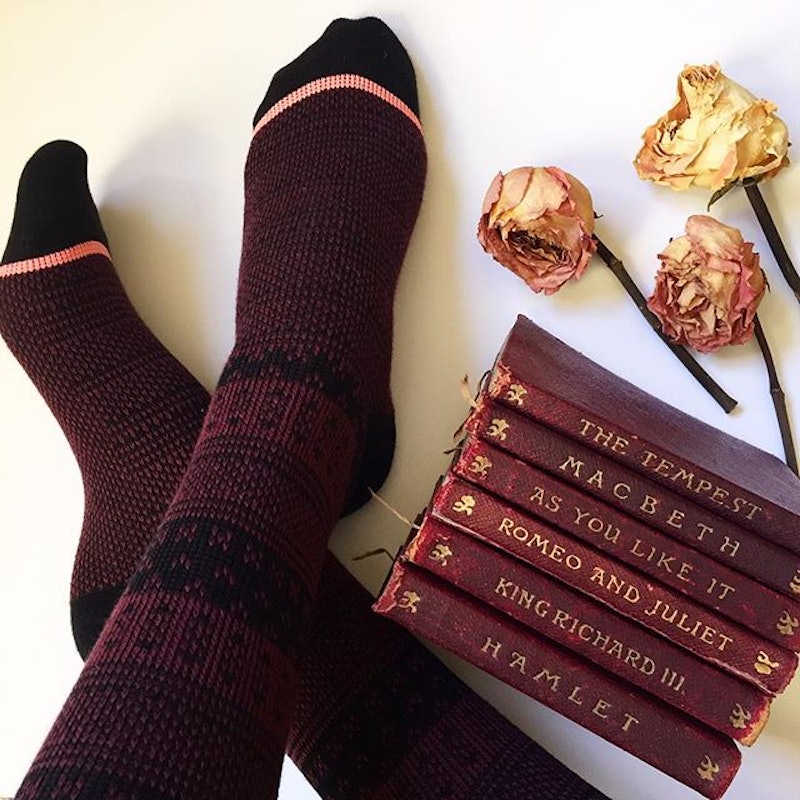 Shakespeare: his characters are iconic; his stories are timeless; his plays are really, really weird. I mean, yes, Hamlet's ghost dad and Bottom's donkey head don't seem quite as weird in the context of a play as they would in real life. But even if you accept that these characters live in a world full of witches and ghosts, where male and female fraternal twins are completely identical and Ancient Rome has working clocks, there is some weird nonsense going on. And these are the top 9 weirdest moments in Shakespeare plays.

So the next time someone tries to tell you that Shakespeare is boring, just throw one of these weird moments in their face:

1. Dudes have to compete in a game show to marry a hot female lawyer

The Merchant of Venice is probably best known for Shylock, the Jewish moneylender who demands a pound of flesh as collateral for a loan (which is already pretty weird). But there's a whole subplot involving Portia, the beautiful heiress (who's secretly a genius lawyer). She's not allowed to marry until one of her suitors solves three clues and picks the right casket in a Deal Or No Deal style competition — so, naturally, we get to see a couple different princes throwing fits when they lose the game and have to go home without a hot lawyer wife.

You'd think that a statue coming to life would be the weirdest part of The Winter's Tale . But no: around the middle of the play, poor Antigonus gets stuck with leaving the baby princess out in the woods to die. But then a bear shows up out of nowhere and eats him. He just... gets eaten by a bear. But this scene gives us what is perhaps the greatest stage direction in the history of English theatre: "Exit, pursued by a bear."

The Taming of the Shrew is better known for being sexist than being truly weird. But the play starts with a drunk named Christopher Sly being kicked out of a tavern. A bunch of rich guys decide to mess with the drunken bum by putting on a play (good prank I guess?). So they put on the The Taming of the Shrew. In some versions, we see Christopher Sly again briefly in the middle, but in most versions, he never shows up again at the end. Like, it starts as a play-within-a-play... but then Shakespeare just forgets about that and makes in a normal play. Just... why?

4. Everyone wants to have sex with nuns

Measure for Measure is often called a "problem play." It's... kind of a comedy? But it's not funny? This nasty dude, Angelo, wants this nun, Isabella, to have sex with him (and if she doesn't, he'll kill her brother). She's not into having sex with anyone. She just wants to be a nun. So Isabella and a disguised Duke spend the whole play running around, trying to trick Angelo into having sex with his own girlfriend instead. They succeed — but then at the very end of the play, the Duke decides that he's going to have sex with Isabella instead. After he spent the whole play trying to help her stay celibate. And then the play just ends. ...what?

5. Macbeth takes a break from the plot to suck up to King James

We all know that Macbeth has the Weird Sisters, but it gets weirder. The Weird Sisters (or the three witches) have a boss named Hecate. In her one scene (which Shakespeare maybe didn't even write), she's annoyed that the witches have been messing with Macbeth without her permission. So they all get together to show Macbeth a series of apparitions, including the future King James, who is going to be the best king ever. ...that's kind of the only point of the scene. The play was written and performed for King James (who was Scottish and hated witches), so someone must have wanted to make extra sure he understood that Shax and company were pro-James.

You know how it is: one minute you're wandering around the forests of France in a jolly Shakespearean comedy about cross-dressing, the next minute you're being attacked by a lioness. Why is there a lioness in the forests of France? I don't know, man. But in As You Like It , the character Oliver gets attacked by a lioness (offstage, presumably so Shakespeare didn't have to rent a lioness costume). That's just what happens. Lions, like bears, are apparently just part of the risk of being a Shakespearean character.

8. England goes to war with France over tennis balls

OK, they don't go to war because of the tennis balls alone. But the tennis balls definitely didn't help. At the start of Henry V , young Prince Hal from the Henry IV plays is all grown up into a king. England and France are disputing some territory, so the Dauphin of France sends him some "treasure" to smooth things over. Only the "treasure" is really just a trunk full of tennis balls. This, back in the day, was a sick burn (the tennis balls implied that Henry would be better suited to tennis than real warfare). So the new king hits the ball right back, totally invades France, has an epic battle and marries the French princess. That'll show France to give other countries tennis balls.

9. Two men are baked into a pie and eaten by their mother

There's all sorts of violence in Shakespeare: gouged out eyes, children jumping off of castles, lots and lots of stabbing. But nothing even comes close to the weird, Saw-style horror show that is Titus Andronicus. Heads and severed, hands are severed, tongues are severed, and two dudes are killed and then baked into a pie, which is eaten by their mother. Yeah. I mean, they assault a girl and then cut off her hands and tongue earlier in the play so... don't feel too bad for them. But if you're looking for a Shakespeare play that feels like a bizarre mash-up of Roman history and Sweeney Todd, this is the one for you.

More like this
Why The '365 Days' Sex Scenes Are Good, Even If The Movies Aren’t
By Arya Roshanian
The 20 Best Audiobooks To Fall Asleep To
By Aoife Hanna and K.W. Colyard
Selma Blair Wrote Through The Pain
By Samantha Leach
Zosia Mamet Opens Up About Her Eating Disorder
By Zosia Mamet
Get Even More From Bustle — Sign Up For The Newsletter