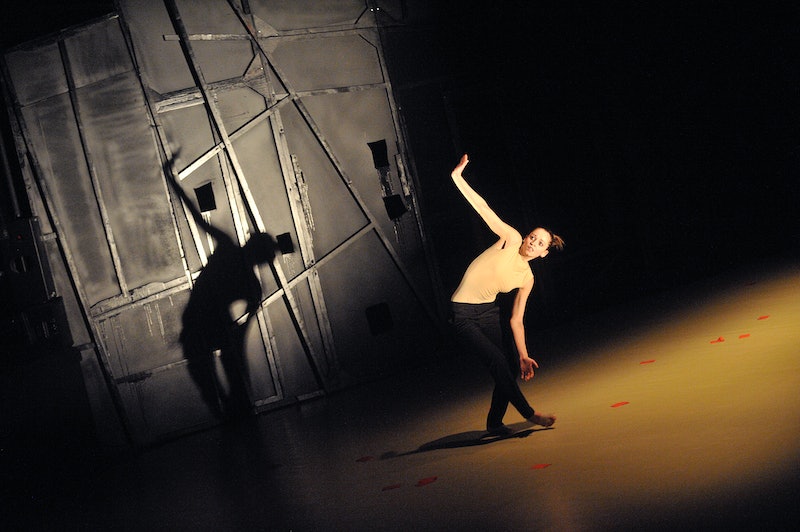 Since it's Shakespeare's birthday, or the day we celebrate his birthday, because like the authorship of some of his plays, we can't be sure of the validity of this information, so let's just act as if it truly is his birthday. Happy birthday Will! Woo hoo, you don't look a day over 449! For some people Shakespeare is a foreign language, but for others it's a living, breathing poetic life- force. Shakespeare freaks read his plays, and try to see every kind of theatrical production and movie version they can. They'll travel for Shakespeare, and emerse themselves in intensive Shakespeare classes. The most devoted Shakespeare fanboys/fangirls are so enthusiastic about the Bard that they are on a mission to convince the anti-Shakespeare peeps just how revelent Shakespeare is today.

Admittedly, I'm one of those Shakespeare freaks. I was introduced to his plays at such an early age that his work just sort of became part of who I am. My first boyfriend and I fell in love when we were both in a Shakespeare play in college. To me, nothing is hotter than men in tights, and stealing a kiss while backstage waiting for your cue. But it wasn't all hearts and fairy magic when one of my boyfriend's admirers threw a pot of cold coffee on me in a fit of Shakespearean rage. But as Lysander (A Midsummer Night's Dream) said, "The course of love never did run smooth."

1. Her ideas about love have been shaped by Shakespeare.

Hookups are OK, but when it comes to love, your Shakespeare fangirl wants to be pursued and courted. She wants the grand gestures, passionate speeches, and promises of love everlasting. Please don't threaten to kill yourself with a dagger to prove your love for her, but maybe reciting a Shakespearean sonnet now and then wouldn't be a bad start.

2. She uses Shakespeare quotes in every day conversation.

Many of the expressions we use today are from Shakespeare such as love is blind or kill with kindness, but a Shakespeare freak will actually use full Shakespearean phrases like love looks not with the eyes, but with the mind or he laughs at scars that never felt a wound. Since Shakespeare is such a part of who she is as a person, she'll be able to insert these phrases so skillfully you might not even notice.

Shakespeare was English, some of his plays are set in England, British actors are considered some of the best at acting Shakespeare, so being a Shakespeare freak goes right along with being an Anglophile.

Seriously, isn't he almost everybody's favorite crush? Yes, there are those in the Bennedict Cumberbach camp, but there's no reason why we can't love both of them since they are friends. Tom isn't just great at acting Shakespeare roles, he adds a Shakespearean element to non-Shakespeare roles like Loki in the Avengers and yet still manages to be believable and fresh—not easy to do. Love on, Hiddlestoners!

5. She knows the difference between a Rennie and a Larper.

Your Shakespeare freak thinks that Renaissance faires and re-enactments are fun with all their dressing in period costumes and fighting with foam weapons, but she knows that Rennies (the faire and living- history people) are very concerned with doing their re-enacting correctly, and that the Larpers(Live Action Role Players) are less interested historical accuracy than in just having fun role playing, and that there exists a huge divide between the two, almost like the feud between the Capulets and the Montagues.

6. Will travel for Will.

A true Shakespeare fanatic knows exactly where all the best Shakespeare festivals, outdoor summer productions, and fantastic Shakespeare performance are all through out the world. There's Shakespeare's birth place Stratford-upon-Avon, Shakespeare in the Park and Oregon Shakespeare Festival and many other locations to get your Shakespeare freak on.

People have been putting their own spin on Shakespeare's plays since forever and there are hundreds of different film versions of most of Shakespeare's plays. Shakespeare fans all have a preference, and very strong opinions on which version is better. For some people Baz Luhrmann's Romeo+ Juliet with Leonardo Di Caprio and Claire Danes is the definitive version of Shakespeare classic love story, while others may prefer to go old school with Zeffirelli's Romeo and Juliet, and swear that the Lurhmann version makes their ears bleed. Try to to stay out of the version wars, for your own sanity.

Many television, books, and movies have been inspired by Shakespeare's writing. A Shakespeare fanatic can always tell when something is based on a Shakepeare play even when everything has been changed. There's 10 Things I hate about you (The Taming of the Shrew,) The Lion King,(Hamlet,) Warm Bodies(Romeo and Juliet,) and O (Othello) to name just a few.

Someone who is into all things Shakespearen loves drama, love, and all the complications that come from living a passionate life and can relate strongly to the characters and themes in Shakespeare's plays.

More like this
6 'Game Of Thrones' Halloween Costumes That Aren't Overdone
By Nina Kahn
Everything You Need To Know About 'Rings Of Power' Actor Charlie Vickers
By Darshita Goyal
Viserys’ Fate On 'House Of The Dragon' Could Differ From The Book In This Surprising Way
By Grace Wehniainen
'The Lord of the Rings: The Rings of Power' Revisits Iconic Spots From 'The Hobbit'
By Darshita Goyal
Get Even More From Bustle — Sign Up For The Newsletter