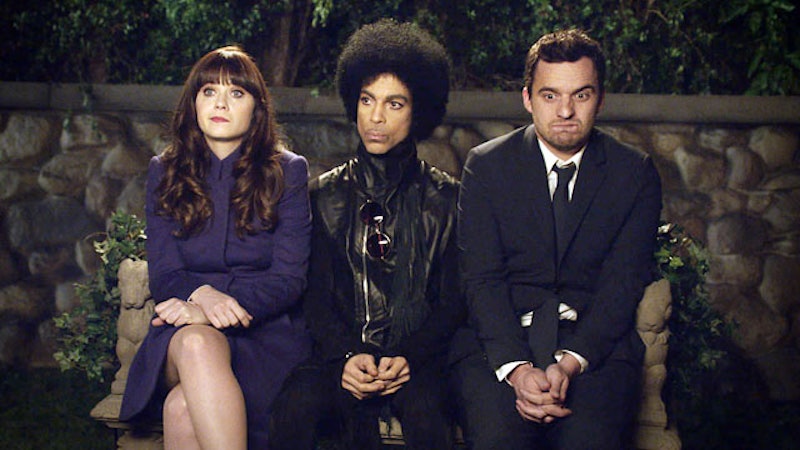 During an appearance on Conan Tuesday night, Zooey Deschanel confirmed what we pretty much knew to be true anyway: generally speaking, Prince was always running the show. Deschanel knows this first-hand because, back in 2014, during Prince's guest spot on New Girl, the iconic singer called the shots like a natural. Especially when it came to who would and wouldn't be invited to a fictional house party of his. In the episode — titled "Prince" — Jessica Day (Deschanel) and her best friend Cece (Hannah Simone) get invited to a party at Prince’s mansion. As one would assume at a Prince party, the mansion would be filled with celebs. Except for one famous family: the Kardashians. Apparently, they were set to come on, but Prince didn't want the Kardashians on New Girl . But why?

Did they have long standing beef? Or was this just Prince being...Prince? Deschanel explained the situation to Conan. “They [the Kardashians] had kindly come on to shoot a little kind of cameo part where they were at Prince’s party. I get there the day the day that Prince is supposed to arrive and … I walk outside and she [the production assistant] has a bonfire. She’s burning all the scripts and the call sheets. And it turns out that someone from Prince’s camp said, ’Who are the celebrities? I hope it’s not a Kardashian.'”

As Deschanel told Conan, the decision seemed pretty final. They were already burning the scripts by the time she got wind of the Kardashian plan being nixed. To make matters worse, apparently Kris Jenner and Khloé Kardashian had already filmed their scenes. Deschanel said, “I felt so bad because obviously everyone had gone out of their way to be there on that day, but Prince was running the show.” Just goes to show, never underestimate the power of the Purple Man. When the Purple Man says "No Kardashians" you don't just cut the Kardashians's cameos... you burn the scripts and destroy the evidence.

So, why the veto? It seems like Prince was pretty firm in his decision to not allow the family on the same episode with him. There's nothing that points to any major strife between Prince and the Kardashians — except for maybe that time Prince kicked Kim Kardashian off the stage at his 2011 performance in Madison Square Garden. See below.

Maybe it was just as simple as that. He didn't want the Kardashians on stage with him. Honestly, he's earned the right to make calls like this, and I'm sure there are no hard feelings from the Kardashians. (Kim herself doesn't harbor any resentment from the 2011 incident, as evidenced by her tweets.)

It's not totally clear why he was so adamant about the Kardashians not being in attendance at his fictional soirée, but that's part of what made Prince so special. So to that I say, fair enough, Prince. Fair enough.