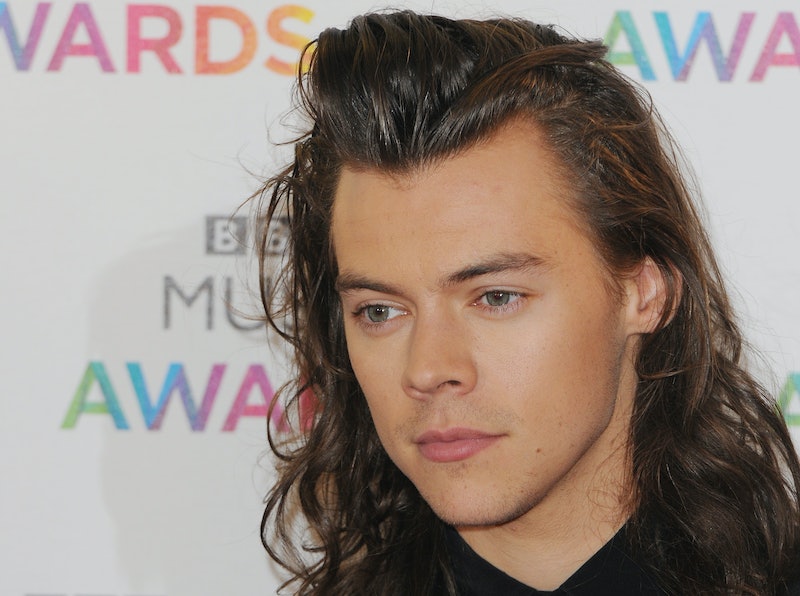 Harry Styles' hair has become almost as big of a celebrity as Harry Styles himself, so when Styles teased that he chopped off his luscious locks on Instagram, fans took notice. Some were disappointed that his ponytail was gone, while others were rejoicing to have a more clean cut Harry back, but everyone agreed that Harry Styles donating his hair to charity was amazing and commendable. While it seems pretty certain that he did indeed donate his hair to The Little Princess Trust (according to the hashtag on his Instagram photo), Styles' upcoming role in Dunkirk might also be a big reason for the chop.

The fact that the singer donated his hair to charity is probably not a huge surprise to hardcore fans. Styles previously discussed growing out his hair and donating it while on The Late Late Show With James Corden back in December. He told Corden that he intended to grow it out until it was at least nine inches so he could donate it to charity. It's a sweet gesture and it's nice to know that his actions backed up his claims, a few months later. But the timing of this got me thinking: Did Harry Styles also cut his hair for his role in first major film role? It seems highly likely.

This past March, the news that Styles might join Christopher Nolan's World War II film Dunkirk started hitting the Internet and everyone was confused considering Styles had never really acted before. But soon, the news was confirmed by Variety and eventually, Styles was added to the official Dunkirk IMDb page. Ahh! The rumors were true!

Styles will be acting in the film alongside Cillian Murphy and Tom Hardy and this is kind of a big deal. Just a few days after the haircut heard around the world, one of Styles' other cast mates, actor Mark Rylance, spoke up about working with him. He told press after his wins at the 2016 BAFTA TV Awards on May 8,

I haven't met Harry Styles yet, no... But he has very nice hair and my 11-year-old niece is now interested in my film work... I think he's had to cut his hair. Where is it?

This seems to confirm both that Styles will be in the film and that he had to cut his hair for the role. But why would he need to? Well, Dunkirk is set during the 1940s, so the men would have to abide to the popular haircuts of that time and likely, by what a soldier's haircut would have been, which means no man buns. A source told Hollywood Life, “Christopher Nolan is a stickler for detail and he did warn Harry that would be the case and he would have cut his locks if he got the role during the initial screening process.”

The official IMDb page for the film states that filming is set to begin on May 14, so the timing of Styles' haircut lines up perfectly. Since he will probably be playing a soldier, there's a chance Styles hair could be getting even shorter that the recent paparazzi pic that came out of the now actor. All I know is that it will be very short and quite a change, but the fact that he donated his hair to a great cause after cutting it for his first film role means that it will all definitely be worth it.