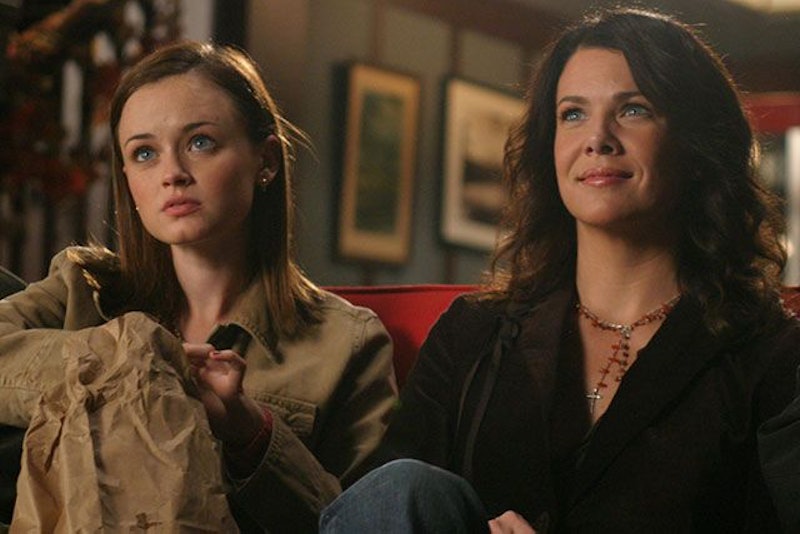 Rewatch all seven seasons of Gilmore Girls, and you realize the show is a treasure trove of good music. While Lorelai is very stuck in the '80s, with The Bangles, David Bowie, and XTC being right up there on the top of her list of favorite artists, Rory is very into the indie acts of the late '90s and early 2000s. She gets super excited about seeing The Distillers with Jess, and offers to share her Arcade Fire album with her mom. But no resident of Stars Hollow is more into music than Lane Kim, who lives and breathes discovery. Lane's fervent love of all things music makes her a bit of a music snob, which is why it's always funny when you hear a super early 2000s song get played on Gilmore Girls.

Such songs almost seem impossibly out of place alongside the hipster tunes of Claudine Longet, Sonic Youth, and Sam Phillips, who did all of the instrumental music for the show. But they do appear, and when it happens, these songs often score important moments for the show. Moments you'll remember — not for the music, but for how they made you feel. To relive these musical moments, I've listed 12 very '00s songs that were featured on Gilmore Girls. Some will make you laugh, but most will have you thinking back to when you first heard these songs, no matter how old you were at the time.

Before this band was changing Zach Braff's life, it was the one playing on Rory's Discman as she sat alone at Chilton reading and eating her lunch. The band would also appear in an episode that had the younger Gilmore trying to spring break. The Shins would also provide the soundtrack for Paris and Rory's first and only kiss. Oh, college.

In Season 5, while Hep Alien is on a break, Gil (Sebastian Bach) is seen singing this track from Love. Angel. Music. Baby. at a Bar Mitzvah. And yes, this was bananas. B-A-N-A-N-A-S.

OutKast was playing when Lane and Henry had their first dance, which would lead to many more dances that same night. It was all that dancing that helped Rory convince Lane that Henry had a crush on her — especially since Lane wasn't much of a dancer. Henry and Lane didn't work out in the end, but they'll always have OutKast.

When Rory's friend Lucy has a 2002-themed birthday party in Season 7, this song backs up a very special dance performance by Paris and Doyle. Yes, they came up with a choreographed number for the occasion as a way to make friends. But would you expect anything less from the best couple on Gilmore Girls ? I didn't think so.

This song was everywhere in 2001, thanks to the Jack-White-led band's Lego video by Michel Gondry. So it's fitting that this song was the very first one Lane's band plays at a high school house party. This was before Hep Alien, back when Adam Brody was still in the group. But Hep Alien did reunite in 2014 to give this song another try.

Avril Lavigne was the angsty pop star of the early aughts, so it's only fitting that Dean's tweenage sister, Clara, would shut her bedroom door and turn this one all the way to 11. Unfortunately, she decided to do this while Dean and Rory were trying to have a date next door. In his childhood bedroom. Probably a sign that this wasn't meant to be. So much for their happy ending.

Right around the time James Murphy's band was making headlines for their song "Daft Punk Is Playing At My House," the band was playing in Lane's house. This was never a popular single, but of course, Lane would be cool enough to know a hit when she heard one. She wasn't the most musically minded Stars Hollow resident for nothing.

It might technically predate the '00s but it is super of the decade. Not even the Gilmore girls could get away from rap-rock. They were able to at least avoid it for a while, given that this song played on the show four years after its release. Of course, it's played by Brennan, the incompetent waiter whom Luke hires and the town hates. It was actually Fred Durst, though, that was the last straw for Luke. When he saw Brennan air-guitaring on top of the tables to this one, he let him know where he could stick that cookie.

Before Wilco was dad rock, it was the go-to band for Gilmore Girls scribe Amy Sherman-Palladino, who consistently had it playing in the background of episodes. This song, off Yankee Hotel Foxtrot, played while Lorelai and Rory overslept after a late-night cram session. I won't blame Jeff Tweedy and the guys for making Rory late to her test, but this song's sweet groove definitely is the perfect lullaby.

It makes sense that they wouldn't be playing just regular ol' American hip-hop at a Yale party, and that it would instead have a little British hip-hop on the playlist. You know, a little hip-hop with some social commentary, courtesy of Mike Skinner. Seems these undergrads couldn't help but be a little smart (and pretentious) even outside the classroom.

This is the song Lane plays Rory over the phone when asking for her opinion on whether or not bandmates can really date. More importantly, Lane wants to know: If she does date Zach, and then they break up, can the band still survive? See, Rilo Kiley's leaders, Jenny Lewis and Blake Sennett, dated for a bit, but continued to make music after they split. Though Lane was torn whether the music was still as good post-breakup, she still decided to date (and eventually marry) Zach.

When Lane's grounded and can't get to a music store to pick up the new Belle and Sebastian single, Rory helps her find a way to secretly get ahold of the track. This song plays as Michel runs around the town waiting for Lane and her mom to leave their house. He jogs by at the perfect time and drops it into Lane's bag. Just another normal day in Stars Hollow.

These songs may show Gilmore Girls' age just a bit, but they also give you the right dose of nostalgia that makes you miss the early aughts. Just a little bit. And makes you wonder what songs from this current decade will pepper the upcoming revival season.