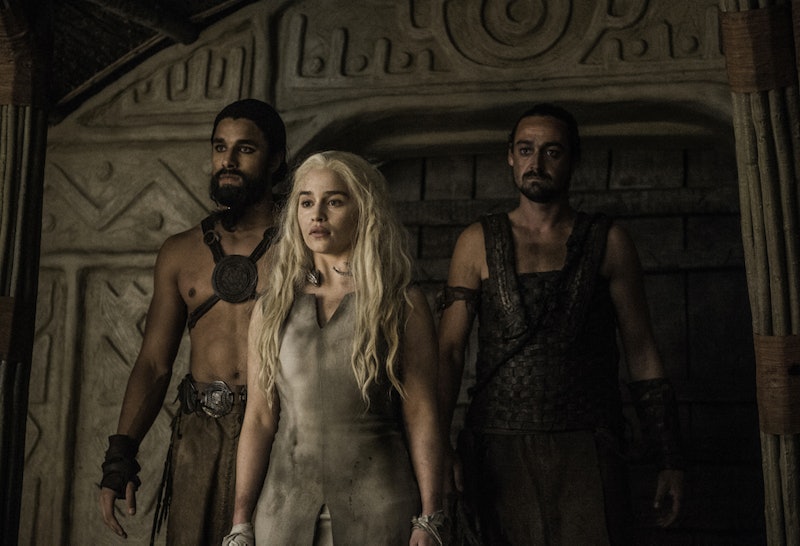 Fans of Game of Thrones look for spoilers anywhere. Kit Harington sneezed? That's got to mean something! Sansa blinked a lot in this last episode? Something must be afoot! Our need for spoilers is why whenever a new episode title is announced, we hop on it and try to eek out every last bit of meaning we can. And HBO just did us a solid and announced the titles of Game of Thrones' Episodes 4-7, but what do these titles hint at, if anything? Are they big reveals of what's to come on GoT, or are they just meant to confuse and fool us into thinking we have some idea of what to expect?

So far, Thrones' episode titles have been indicative of spoilers in the slightest of ways. Episode 1, "The Red Woman," clued us in that something was up with Melisandre, and this was confirmed at the end of the episode when we saw what the Red Woman looks like without the glamour. Then, in Episode 2, "Home", Bran does indeed go "home," though it's Winterfell before he was even a thought in his parents' minds. Finally, Episode 3's title, "Oathbreaker," is the name of Ned's sword, and fans got to see young Ned using that weapon. But what's the deal with Episodes 4, 5, 6, and 7? Here's what the titles of the future episodes could mean.

Episode 4: "Book Of The Stranger"

In the preview of Episode 4, we see that Cersei and Oleanna Tyrell are joining forces to take down the High Sparrow and his fellow religious fanatics. The Stranger is one of the Seven Gods — his godly pals include Father, the Mother, the Maiden, the Crone, the Warrior, and the Smith. Could we see some religious magic stuff go down with in a High Sparrow vs. a Lannister-Tyrell showdown? We've seen some voodoo happen via The Faceless God and The Lord of Light, so maybe it's time for the Seven to step up.

There are a lot of places a title as vague as "The Door" could go. First choice is the 101 Dalmations style-door at the House Of Black and White — maybe someone unexpected from a girl's past will show up at the doorstep. Perhaps someone who was part of her nightly vengeful bedtime story?

Or maybe "the door" refers to the door at the Tower of Joy, which probably leads to a mid-birth Lyanna Stark pushing out baby Jon Snow as her lover Rhaegar dies (R+L=J FTW). There's a theory proposed by Popsugar that Hodor, aka Wilys, got his nickname because he received the command "hold the door" against people coming after Lyanna Stark in the Tower of Joy. From them on, he was so traumatized all he could say was "hodor," a slurred version of "hold the door." Maybe we'll see Bran finally understand his companion.

Episode 6: "Blood of My Blood"

Game of Thrones is, to put it mildly, into blood. Melisandre kills people by burning leeches, people are super into the purity of bloodlines, there's a whole lot of death and injury going on — it's just a blood-lust society. So first, I think that the title reveals that this is going to be a pretty bloody episode — I'm picturing some major violence. Somebody's going to get assassinated, and my money's on Ramsay.

But then, there's the second part of that phrase, the Daenerys part. "Blood of my blood" is a phrase used a lot by the Dothraki in regards to each other, so maybe this will be a Dany-heavy episode. Maybe she'll be rescued from The Khal Drogo Memorial Home For Widowed Khaleesis by Jorah Mormont, her constant "we're just friends" pal who bowed down and called her "blood of my blood" right when she hopped out from the ashes in Season 1. Or maybe she'll meet a newly-discovered member of her Targaryen bloodline... perhaps Jon Snow?

In a Brienne of Tarth section of the fourth novel in the series, A Feast For Crows, Septon Meribold take mansplaining to a new level by boring Brienne with a monologue about "broken men," men who have no banners and are just simple folk but are then made to fight until they break. Meribold is speaking specifically about The Hound, aka Sandor Clegane, and mentions him by nickname saying, "but most outlaws are more like this ravening Hound than they are the lightning lord."

We never saw The Hound actually die when he fell down a hill in his Brienne fight and Arya abandoned him, so perhaps he could still be alive somewhere And maybe, just maybe, this time he's go after his zombie brother, Gregor, in the grandest Clegane Bowl of them all.

Look, you can theorize and brainstorm theories until you're as blue in the face as a white walker's eyes, but only time will tell what these episode titles truly mean. Let's just hope HBO reveals some more info soon, so fans won't be left hanging for long.