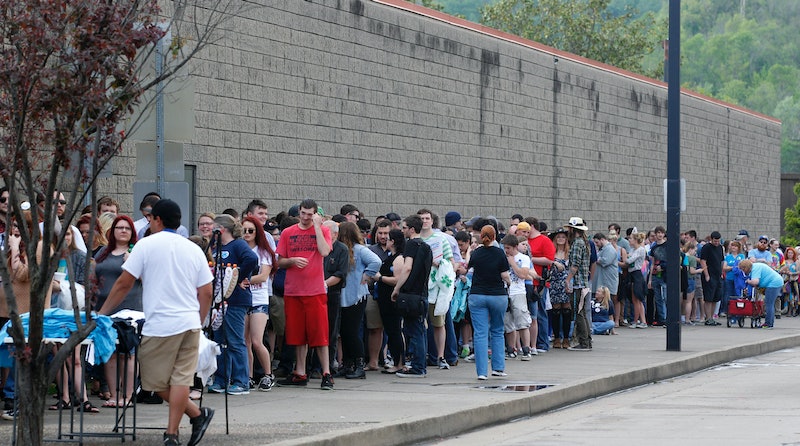 Unusually high voter turnout has marked this year's election cycle in primaries throughout the United States. Whether it's the result of one candidate in particular or a response to the political landscape in general, voters have turned out to the polls on their respective election days in record numbers, causing lines to grow long and polls to stay open late. On Tuesday, West Virginia's primary voter turnout followed the same pattern, with voters showing up in large numbers on election day and setting records for early voting.

With more than 90 percent of the vote reported, it was clear that more than 400,000 West Virginians had cast their votes in either the Republican or Democratic primary. West Virginia has a semi-closed primary system, meaning that the limitations on who can vote in each primary are decided by the parties themselves. In this case, voters unaffiliated with either major party were allowed to vote, and they didn't have to register with a party to be eligible to do so. Out of the more than 1.2 million voters registered in the state of West Virginia, at least 32 percent voted in one of the primaries, Republican or Democrat. That's on par with the elevated turnout rates measured in states across the country this year.

In addition to high turnout, there may have also been a greater sense of urgency to vote. More West Virginians took advantage of early voting options for this primary than in any other primary in the state's history. All in all, more than 100,000 people voted early, compared with just 57,000 in 2012.

A spike in voter turnout like the one states have seen this year is unusual across the board, but elevated turnout is particularly noteworthy in West Virginia. In 2012, West Virginia had the lowest turnout rate of any state in the November presidential election between President Obama and Mitt Romney. At the time, turnout was particularly low among young voters between the ages of 18 and 24. That's a group that tends to turn out in droves this year for Vermont Sen. Bernie Sanders, although it's not clear if young voter turnout really explains the spike in attendance at the polls on Tuesday.

Another reason for low turnout in 2012, according to state officials, was the lack of competitiveness in the race. Both campaigns — Obama's and Romney's — seemed to overlook the Mountain State, probably assuming — and rightfully so — that Romney would easily win the state without much of a fight. At this point, there's no telling what will happen in the general election, but West Virginia was certainly a focus for at least some of the candidates, particularly Sanders, who won the state's Democratic primary over Hillary Clinton.

As with other states, the real test of voter turnout will come in November. Turnout tends to be higher in general presidential elections than primaries, but then again, not very much has followed tradition in this election cycle. If candidates begin to ignore West Virginia as has happened in previous elections, it's possible that turnout could taper off once again.