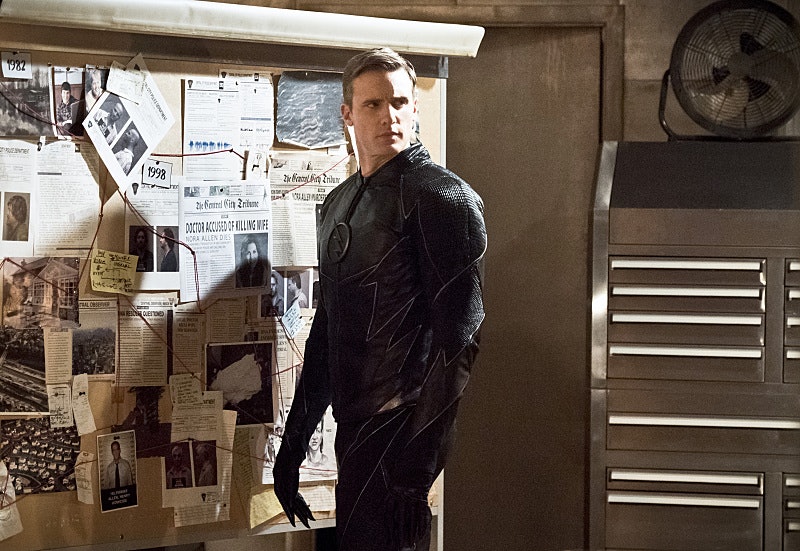 You know, for a second there, I had actually thought that we managed to get an episode of The Flash devoid of Zoom's utter creepiness. Alas, I was wrong. Once all of Barry's heart-wrenching mama drama was over in "The Runaway Dinosaur" and I mopped myself up off of the floor, the reappearance of Zoom did what I am sure those devious Flash writers and director Kevin Smith set out to do — totally shake me. More so than usual, Zoom's presence and subsequent threats left me feeling uneasy and anxious. And, if the waning seconds of the episode and preview for next week were any indication, that's exactly how we should be feeling given the fact that Zoom is about to take over Central City on The Flash .

Of course, this looming threat was made worse by things actually going right for once in Barry's neck of the woods. With Barry's acceptance of himself, his mother's death, his past, his mission, and Iris as his true love, we were all lulled into a false sense of security. I was floating on a cloud of fluffiness for a good minute or so. Which, in retrospect, was super naive.

Because, duh, how could I forget that Caitlin is still being held captive by Zoom? I have some legitimate concerns about that, by the way. Like, doesn't she have to pee? Is she hungry? How does her hair still look so damn good? And, perhaps Zoom shared in my worries, because in his sick and twisted mind, he did her a solid and gave her an out. An out overshadowed by a do or die ultimatum, but still, an out. Of course, we don't know for sure if Caitlin stays with Zoom and reaps the benefits of that, or leaves to be with Team Flash and signs her own death warrant, but I think we can guess. Caitlin isn't Killer Snow, after all. She's going to do the heroic thing.

But, that wasn't even the worst part. No, the worst part was the way Zoom rallied a crowd of malevolent metahumans behind him, getting them amped up for his takeover. And, in the preview above for next week's episode "Invincible," it looks like they follow through on their plan (at least, at first). Then there's the whole business where Barry screams, "No!" as Zoom is apparently trying to mortally hurt someone, and we have a perfect storm of utter terror. If this week's episode of The Flash left me so freaked out, I can only imagine what the rest of the season has in store for us.