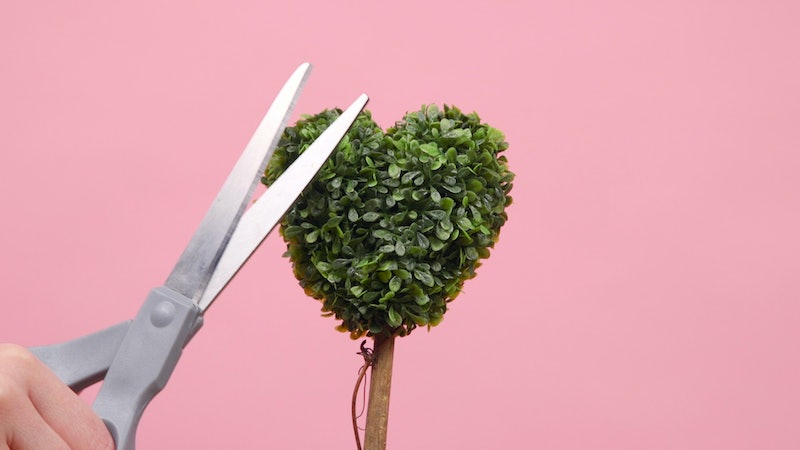 If you've ever been in a long-term relationship (or just listened to a friend in a long-term relationship hash out their love woes over brunch), you know how the story goes: when you first meet someone that you really like, it's as if life as you know it completely changes. You can't eat, you can't sleep, you can't think of anything but them — and when you're finally together, it's like the rest of the world doesn't exist. Doing anything that keeps you apart — from spending the day at work to accepting the Nobel Peace Prize — just feels like a chore, another annoyance keeping you from spending more blissed-out time with your new love.

And then, after a while, things...cool down. You still love each other — in fact, you probably feel a deeper and more intimate emotional connection than you did when you first began dating. But after you've been together for a while, the urges to spend every second together gazing into each other's eyes seem to disappear, replaced by urges to pee with the door open or have petty arguments about what to order for dinner tonight. We know that this change feels almost inevitable; but why does it happen? And is there anything we can do to fight it, and make our relationship feel new again?

1. Falling In Love Changes The Way Our Brains Function (For A While)

Love may feel like it's all in our minds — but it is actually a physical process, as well, and the mental and bodily sensations we associate with new love have a lot to do with brain chemistry.

There are two areas of your brain that become particularly engaged when you fall in love — the ventral tegmental area (which deals with processing emotions) and the caudate nucleus (which handles learning and memory). New love also makes the brain create larger-than-usual amounts of dopamine, the "feel good" neurotransmitter that increases the pleasure you feel in response to rewarding events. So while you'll probably always feel good when you see your partner at the end of a long day, seeing them in those dopamine-soaked early days of your relationship will simply feel better than it will later on, when your dopamine levels have returned to their pre-love levels.

Studies have also shown that people who have recently fallen in love had higher-than-average levels of NGF, a protein that helps neurons function and helps the brain change in response to new experiences. Basically, NGF sends good feelings to your whole body, and makes your brain feel over-the-top in love with your new partner.

However, the same studies showed that after one or two years in a relationship, subjects' NGF levels were no longer elevated, and fell down to the same levels that single people or people who had been in long-term relationships had.

So what does all this mean? Well, for starters, it shows that if it feels like your fire for your partner has dimmed, it's not necessarily because you're a jerk or taking your relationship for granted...it's because, scientifically, our brains aren't wired to maintain that level of initial ardor for the length of an entire relationship.

2. New Love Feels Good, But It Is Hard On Your Body

So why do our brains stop pumping us full of these feel-good chemicals? Why don't we just get to be doped up on dopamine and gazing into our beloved's eyes for the next 40 to 50 years? Well, for starters, there's evidence that the physical process of falling in love is actually pretty hard on your body.

The same study that measured NGF levels in people who had just fallen in love also looked for the presence of cortisol, a hormone that is released in response to stress. And guess what? The bodies of people who had just fallen in love were chock full of cortisol! Cortisol is released when we're stressed — which means that, though you might not notice it because you're too busy sending your new partner sexy Snapchats, falling in love is pretty hard on your body. Elevated levels of cortisol can negatively impact your immune system, making you more vulnerable to illness — it can even make your wounds heal more slowly than they usually would!

But keeping that new love feeling forever wouldn't just be potentially dangerous for our bodies; it could also be potentially dangerous for our minds. Our brains adapt to and normalize new experiences, for our own well-being — this tendency keeps us able to ride a bike again after we fall off, instead of being so scared by the fall that we stay away forever. But it also means that we normalize good experiences — like the thoughtful behavior of a partner, for example. This particular process of normalizing good feelings until they stop feeling so special is called "hedonic adaptation" — and it's actually important for the survival of the species.

Dr. Katie Bao, a professor at Manhattanville College, explains to Bustle that throughout our lives, "eventually, we get used to what happens to us." We each have a baseline of wellbeing that we come back to after both positive and negative events — and after we've been in love for a while, the artificial bump of wellbeing we've received dies down, and we're back to where we were before we met our partner.

But before you let info that bum you out, know that this tendency to level out is actually a helpful mechanism. Bao says, "It would be problematic if every event that happened in our lives effected us for the rest of our lives." And that goes for love, too: "If we fell in love, and were in that delirious, passionate love state for the rest of our lives, then, if we think back to our ancestors, maybe they wouldn't be paying attention to threats in the environment, like 'There's a lion, and I need to run away!'" So basically, our tendency to not stay in the daze of new love forever is responsible for our survival as a species. Thanks, brains!

3. You Can Still Feel Passionate, Even If You Don't Feel "Honeymoon Period"-Passionate

Perhaps you're losing hope now. If our brain wiring made it so that after a few years, our natural tendency is to just watch Netflix together and only touch when we reach for the same nacho, what hope do we have of fighting this thing? A lot, it turns out; though decreased passion after some time together may be the brain's default mode, there are things we can do to rekindle some of that passion we once felt.

Therapist and author Esther Perel tells Bustle that human beings have both a need for security and a need for adventure — and reconciling these needs within a romantic relationship, and turning to the same person for both passion and predictability, should not be viewed as a problem we need to solve, but as "a paradox that you manage."

Perel says that this passion is not the exact same thing as the "honeymoon phase" — "there's only one beginning," she tells us. But if we're willing to expand our ideas about what a long-term relationship should look like — rather than being disappointed if our relationship doesn't match the ideal of effortless romantic passion held up by our culture as ideal — and take an active role, we can still feel passion and attraction to our partner. So there you have it: just because you're wearing sweatpants in front of each other, doesn't mean you can't also feel crazy about each other.