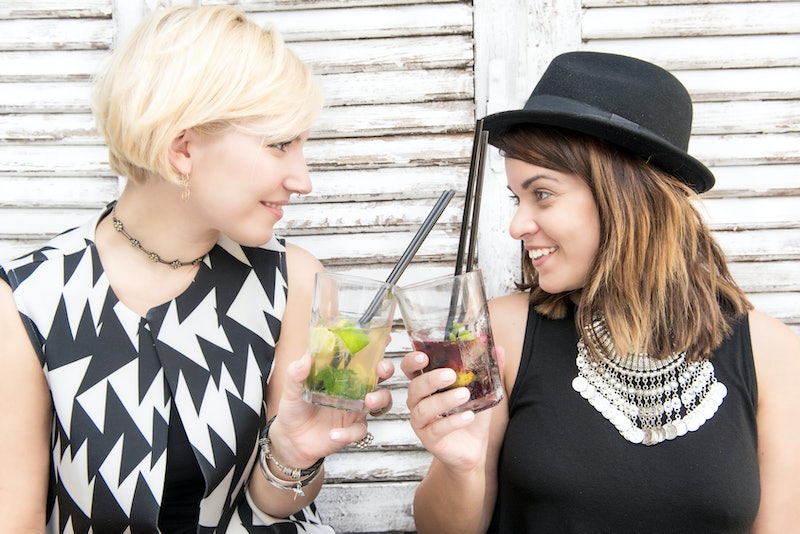 Talking to strangers is scary. And talking to strangers who you think are cute and want to know more about? Super scary. So many of us want to meet people in real life and ditch the dating apps (or at least use them less), only to be faced with the reality of having to strike up a conversation with a total stranger. But guess what? The words you use to break the ice might not even matter. Relationships expert Benjamin Evans* tells Bustle that it’s less about the specific words and more about getting the words out there in the first place.

“No one ever remembers the first thing you say to them,” Evans says. “What you say doesn’t actually matter — most people can’t remember the very first thing their partner said to them. It just needs to be interesting enough to get their attention and authentic enough so you don’t come off as a fraud.”

So what’s authentic and interesting? Well, there’s one classic line that definitely doesn’t fit either category: “Can I buy you a drink?” Evans warns against using that line, no matter what your gender is, because it sets up an icky power dynamic from the get-go.

“What you’re in essence saying is ‘Can I buy time with you?’” Evans says. “It belittles the entire human interaction into a transaction. If you’re truly interested in someone, find something about them that you think is interesting and ask a question about it in a genuine way.”

Instead, Evans recommends taking one of two approaches: situational openers or direct openers. Situational openers are when you’re both in the same place and you comment on something you’re both experiencing. So, for example, you’re in a bar, a song comes on, and you turn to the person next to you and say, “I love this song! Don’t you?”

Evans doesn’t recommend commenting on what someone is wearing, though, at least for people who are trying to hook up with someone of the opposite sex. Openers like “I like your earrings” from a person who clearly doesn’t wear earrings are fake.

Direct openers are riskier, but they do establish the fact that you’re interested in someone in a romantic or sexual way right from the first interaction. Basically, you go up to someone and say something like “I think you’re beautiful. Are you as interesting as you are gorgeous? Tell me something fascinating about your day.”

If the person is interested, they’ll probably smile, blush, and tell you about their day. But if they’re not, they’ll most likely say something like “I have a boyfriend/girlfriend,” or, “Go away.” And at that point, you really do need to go away — pushing past that “No” is when you get into creeper territory.

So with that in mind, here are five ways to start a conversation the next time you think someone is cute. Pro-tip: Make sure there’s always a question in there. Comments do not make conversations! But first, check out the latest episode of Bustle's Sex and Relationships podcast, "I Want It That Way":

“Hi” is not technically a question, but it does demand a response. Seriously, just go up to someone, make eye contact, smile, and say “Hi!” When they say “hi” back you can follow up with one of the following questions.

It’s a classic for a reason — it shows that you’re interested in them and it gets the conversation started. Be ready with a follow up question, though, in order to keep things moving along. Even the most mundane questions — like where they’re from, what they do for work, what they’re reading — help people feel more comfortable and willing to keep talking.

3. “Can you believe this weather?”

I’m from a state where the weather is extreme and changes every five minutes, so this is one that’s near and dear to my heart. Do people know it’s a forced conversation starter? Sure! But who cares? It works because it’s inoffensive, non-threatening, and gets the ball rolling.

This is specific to bars or restaurants, where you can point to someone’s beer or food and ask about it. The same idea can be applied to someone reading on the subway or bus but, please, remember: Pay attention to body language. If someone has their head buried in a book, headphones on, they probably aren’t open to being approached.

Evans suggests, half joking, that if all else fails, carrying around two apples and asking people “Do you like apples?” Then, no matter what they say, whipping them out and saying “How do you like these apples?” According to him, you’ll get a laugh no matter what.

While this last one is obviously silly, the point still holds: It’s not about what you say; it’s just about saying it. Be brave, say “hi,” and reap the results.

*Full disclosure: Benjamin is my boyfriend.

More like this
Are Quality Time & Gift-Receiving Love Languages Compatible?
By Lexi Inks
The 19 Best Tweets & Memes About Bisexual Awareness Week
By Lexi Inks
How To Set Rules If You're In An Open Relationship
By Lexi Inks
Breeding Kinks Have Been On The Rise Since Roe V. Wade Got Overturned
By Lexi Inks
Get Even More From Bustle — Sign Up For The Newsletter