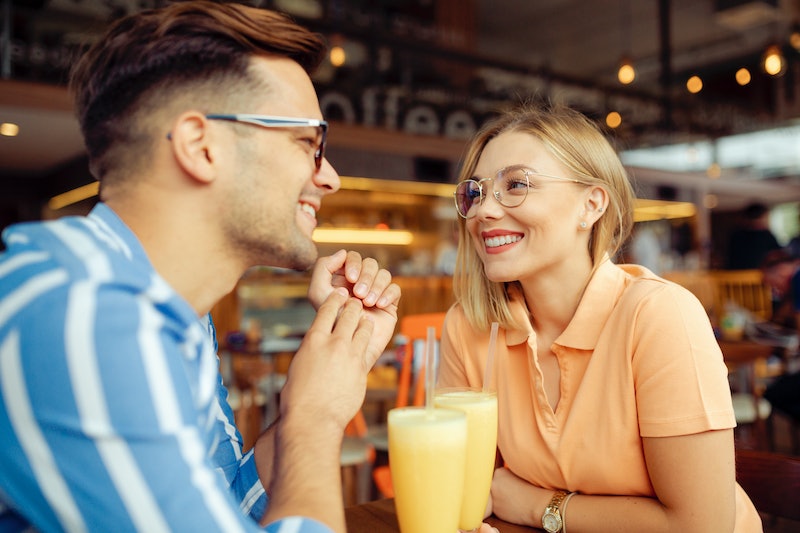 I'm nearly 26 years old and the closest I've ever come to using a dating app was downloading Tinder and OKCupid while I was on the pot — and then immediately deleting them both. Dating apps, it seems, just aren't my thing. This isn't because I think they're stupid, though. In fact, I actually totally understand why they're so popular. No one likes having their time wasted, and I'm guessing that picking up guys in real life definitely takes more time than perusing OKCupid and Tinder does.

On top of that, dating apps allow you to meet people you may never have run into otherwise — and you don't even have to switch off Netflix or put on real pants to set it all up. Plus, since most dating apps match users based on their compatibility, it wouldn't surprise me to discover that using dating apps might lead to more successful first dates than trying to meet people in real life does.

That said, I think I will always prefer picking up guys in real life over trying to find love and/or sex online. As a forward woman, I enjoy the thrill that comes with making the first move — and risking face-to-face rejection — rather than waiting to be approached. I also really enjoy the surprised reactions I get, too. And for me, making the first move feels like a feminist act, as women are so often expected to just let life happen to them instead of asking for what they want.

I just recently started seeing someone exclusively, so I'm currently taking a break from picking up guys. However, that doesn't mean that all my knowledge has to go to waste — for all you singles and/or polyamorous folks out there, here are a few of my tips for picking up guys in real life.

1. Don't Wait To Be Approached

If you really want to try meeting your dates in real life, and you typically date men, then you're going to have to get comfortable with approaching dudes. I know it's easier said than done for a multitude of reasons. Rape culture discourages women from making the first move with men, and if you're not used to being forward, it can be really intimidating at first. Even though I've had practice with asking guys out, I still get nervous sometimes, because you just never know how people are going to respond to you. All that said, it's simply not realistic to expect to meet guys in real life if you're not willing to risk rejection and/or being perceived as "coming on too strong."

If you're anxious about being turned down, consider asking out the guy you're interested in as you're leaving whichever venue, bar, or party you met him at. That way, if it gets weird or they decline for whatever reason, you won't be stuck in an awkward situation.

2. Wherever You See A Guy You’re Interested In, Talk To Him

Of course, you should be considerate about where you approach potential dates. The waiting room of your doctor's office, for example, probably isn't the best scene for picking up dudes. But honestly, if you see a guy you're interested in, regardless of whether you're at a bar, your gym, in the park, or walking around Trader Joe's, I would encourage you to go talk to him. Come up with an ice-breaking comment if you want to, or just be direct with him.

Personally, I prefer directness for a few reasons: when I'm not being direct, I end up being timid and awkward, and I also enjoy being direct with men because, in a world where women aren't "supposed" to be blunt, being forward with men makes me feel powerful.

It may feel intrusive at first, but there's nothing wrong with going up to a guy at a coffee shop, introducing yourself, and then handing him a piece of paper with your name and number on it. Honestly, as long as you're respectful about it, it's really not a weird thing to do. I mean, have you seen an episode of Friends lately? Before the rise of dating apps, meeting cute — or meeting weird — was the only way to pick up anyone.

3. Be Forward Instead Of 'Mysterious'

The last dude I tried to pick up was a sexy, red-headed bagel shop barista. We didn't end up going out, because he had just started seeing someone. But asking him out was still super fun for me, because I got to practice being forward.

I could have cultivated a friendly conversation with him and tried to secretly determine if he was single before handing him my number, but like I said, I don't enjoy being coy. So instead, as I was leaving the shop, I handed him a napkin with my name and number on it and said, "Hey, I don't know what your situation is, but you seem pretty chill. Hit me up if you feel like it." Then I turned around and walked right out of the bagel shop.

The look on his face alone made my day, but it also just felt good to be direct. Try it. Even if you don't get a date out of the exchange, it will probably make you feel brave, and you'll slowly become more comfortable with making the first move. At least, that's how it's worked for me.

4. Go Out By Yourself Sometimes

OK, so if you're planning to barhop until two in the morning, you should probably bring a buddy along. If you're looking to do something more chill, though, consider taking yourself out for a beer or coffee after work. There's nothing sad about a woman getting a drink by herself, and in my experience, it's sometimes easier to meet guys (and just people in general) when you're attention isn't focused on your friend group.

5. Check Out Some Events/Bars/Parties That You Normally Wouldn’t Go To

If you want to meet new, interesting people, then you're going to have to step out of your comfort zone sometimes. When I was living in New York, I ended up going on an awesome date simply because I stepped way the hell out of my comfort zone to attend a makeout party. Another time, I met a cool dude when I went to see a UCB show solo.

Now, I'm not suggesting you should attend events or parties that make you uncomfortable, and I'm definitely not suggesting that you go to bars that seem sketchy to you. But you can't expect to meet new people if you're always frequenting the same haunts, either, so try switching it up and trying new places (that still make you feel at ease) from time to time.

Since we're talking about picking up guys the old-fashioned way, I feel like I should address the fact that cell phones die sometimes, so you might want to consider keeping a pen and notebook in your purse or handbag. Plus, like I mentioned earlier, there might be times when you're feeling so shy or rushed that you just want to hand a dude your info and flee — a benefit that messing around with your phone just can't afford you.

7. Don't Worry About Getting Rejected — It's Not That Big Of A Deal

I feel like part of the reason many women are scared to ask guys out has to do with the fact that women are conditioned to take rejection personally. Our society tells us that all men want sex 24/7 and aren't that picky about who they have it with, so if a man turns a woman down for a date, there must be something "wrong" with her — but that is so far from the truth. Men turn women down for many of the same reasons women turn men down — like lack of chemistry, busy schedules, or being in a monogamous relationship — and that's OK.

Rejection can suck, but you shouldn't let the fear of rejection keep you from trying to pick up a guy you're interested in. If he does reject you, it doesn't make you any less beautiful or interesting. And if he doesn't reject you, then you're probably going to feel like a goddess (or at least a major badass). Either way, you'll have a fun story to tell — and the risk of rejection is definitely worth potentially getting to date someone awesome AF.