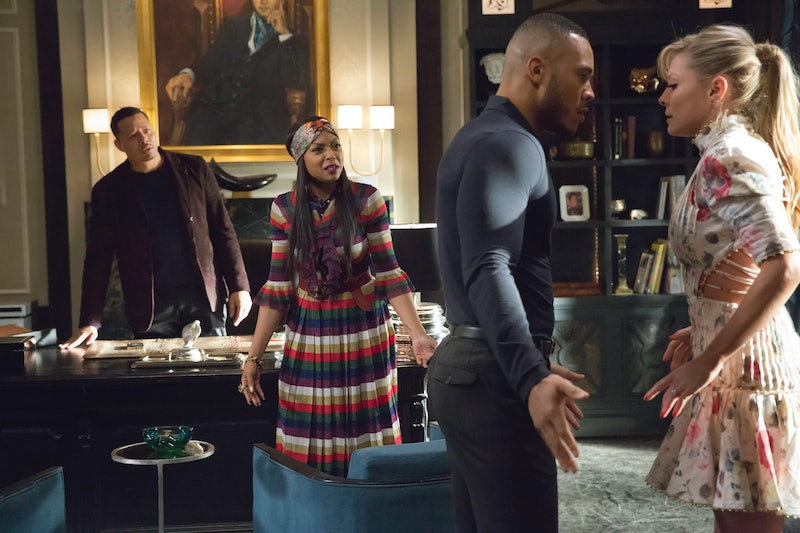 Stunt promos during "sweeps" (aka the time of year where the season finales are all airing) on television are nothing new. The Bachelor and The Bachelorette have tons of crazy promos. And I mean, have you ever seen Grey's Anatomy? That show is the queen of sweeps. Anyway, the latest promotions for Empire are totally sweeps ready, promising "a Lyon will fall." What does it all mean? I can tell you that it definitely doesn't mean someone will die on Empire . In fact, I doubt anyone on the show will bite the dust.

Well, for starters, Empire is very much an ensemble show. Sure, Lucious seems to be the center of attention, but every character on Empire is essential to the story — yes, even Cookie's crazy sisters. Eliminating one of these characters would throw off the whole chakra of the show, leaving them with a Hakeem-size hole to fill. The only people who die on Empire are the inconsequential ones, like Camilla, Vernon, and that journalist lady who was following around Lucious (OK, we're not sure if she's dead, but she probably is). Real death is not imminent on Empire. The show is too popular to lose one of the core crew. My guess is that they're saving that in case of a slump in Season 3.

If "a Lyon will fall" doesn't mean that one of the Lyon clan will die, what could it denote? I have a few suggestions.

Sure, he’s been ousted before, but that was short lived. But with the FBI breathing down Lucious’ neck (even though he doesn’t know it), can a real jail cell be far behind? Cookie’s always been the real brain behind Empire Enterprises, and she should get her due at the top.

Andre suffers from bipolar disorder, and he’s been managing his condition with medication and the support of his wife, Rhonda. But, following the death of his unborn child and the loss of his religious beliefs, I think that Andre is teetering on the edge once again. He’s suffered so much in the past few episodes that it will only take one strong gust to get him to fall again.

We’ve seen the setup that Cookie’s sister helped Lucious off some people while Cookie was in jail. Cookie went to jail to protect Lucious the first time (and she lost 17 years of her life because of it), so would she do it to protect him again? We know the FBI is after him, after all. I would hope not, but Cookie always has had a weird allegiance to Lucious.

Anika Will Have Baby Trouble

So I don't think we're going to lose another baby on Empire, because that would be too easy. Andre and Rhonda already suffered through the death of their unborn son. But maybe Anika and her baby (Hakeem is the daddy, by the way), will be struck by health problems or something. I never thought that she would have an easy pregnancy — it's karma for pushing Rhonda down the stairs.

So yeah, a Lyon is allegedly about to fall on Empire, but it doesn’t mean any of the main characters are going to perish in the finale, OK?