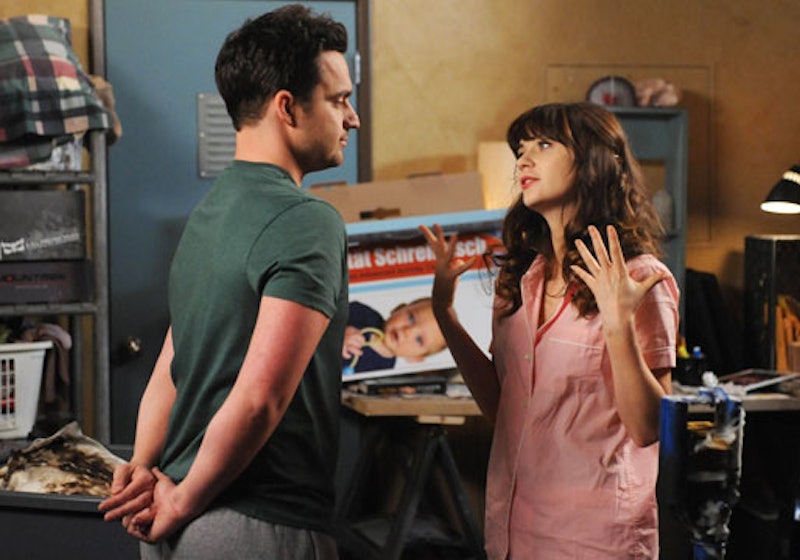 In the Season 5 finale of New Girl, the show did what it does best — get my hopes up for a Nick and Jess reunion and then smashes it into tiny, little pieces. Well, actually, in this instance, Megan Fox's return to New Girl placed a (very beautiful) person-sized rift between them, before they could even get started. While I genuinely enjoyed Fox's character, Reagan, and her jovially antagonistic relationship with Nick while Jess wasn't around, now that Jess is back in the loft full time, whatever Nick and Reagan had seems so insignificant.Sue me, I'm biased.

I am a Nick and Jess shipper through and through, regardless of their dysfunction. So, hearing that Nick is heading on down to San Diego for the summer to live with Reagan as she works there, was, you know, only slightly soul crushing. Especially when, after a whole two seasons of beating around the bush, Jess was finally coming to terms with the inevitable— that her and Nick belong together. Partial credit, of course, for that revelation goes to the well meaning but always in-the-way Dr. Sam, who pointed out what Jess herself was too blind to see. She couldn't marry him, even if she wanted to (and even though he didn't ask), simply because he isn't Nick.

Here's the thing. While Reagan's return and Nick's temporary loft departure put a definite detour in the Nick and Jess plans, and though I am just a tiny bit bitter over it, I don't think Fox's character is going to be a threat for long. In fact, I think she might be the one last roadblock they have to overcome before going all the way. Or returning to going all the way. Show runner Liz Meriweather says at much as she hints a Nick and Jess rebuild. She told Entertainment Weekly that,

...It’s a big deal to have Jess realize that she still has feelings for Nick. It’s a new dynamic between them, where now she’s the one who is really pining after him. Earlier, in season 2, he was kind of pining after her, so the balance has shifted. We love Reagan, and she’s really funny with Nick. Nick dating Reagan shows how much he has grown too; he has the confidence to be with her. In order to get Nick and Jess back together, both of the characters [would need] to grow a lot and change or realize what went wrong in the last relationship. I’ve been trying to move them both in that direction, and what this finale does is have them both take big steps forward in that way. Next year, the door is definitely open, and Jess is probably standing in the doorway.

You hear that, friends? It's the sound of a new age of New Girl dawning upon us. I also like the notion that it's Jess who's the one potentially going after Nick. Why should it always be the guy making big, romantic gestures to the girl? It's 2016, everybody. I am more than interested in seeing a rom com trope being flipped on its head, especially with one of my favorite couples. Nick and Jess were never about conventions, anyway.

You can't keep chemistry like that on the back burner for long, can you? My only hope is that, even after Nick and Reagan inevitably break up, Megan Fox's character remains on the show. She adds a new dynamic that I absolutely love, and her characters is more than just who she's dating — or who she's keeping apart.