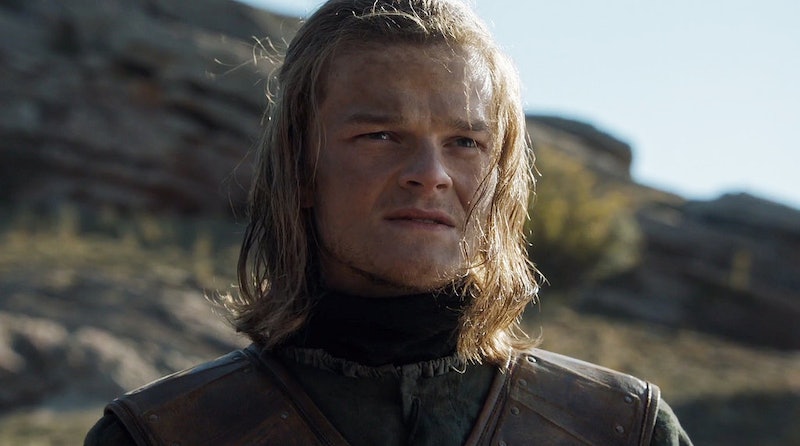 Remember those days when I always knew what was coming next in Game of Thrones because I'd read the books? If you miss those days, too, you should check out Robert Aramayo discussing Young Ned Stark, his character on Game of Thrones. The information he divulges in the interview isn't quite enough to get us back to that smug feeling of superiority about always being at least one step ahead of show-watchers, but it at least gives us an idea of what we can expect from Bran Stark's visions in the future.

In case you aren't caught up, first of all, you should stop reading, because this post will have spoilers from Season 6, Episode 3, "Oathbreaker." In said episode, which aired on May 8, we take a journey with Bran and the Three Eyed Raven into the past, where we see a young Eddard Stark matching swords with Ser Arthur Dayne as he searches for his sister Lyanna outside the Tower of Joy.

The story goes that Ned defeated the Sword of the Morning, as he was called, but we see in the vision that Dayne had actually disarmed Ned and was about to dispatch him when he was stabbed from behind by Howland Reed. It's a piece of information that informs not only the audience and the character of Young Ned himself, but also gives us some insight into what we can expect from the rest of Bran's visions, moving forward. Namely: some more personal looks at figures who loom large in his own history, that will make him — and us! — question everything.

In the scene from this most recent episode, we got to see the process of Ned crystallizing into the person he was at the time of his death, which is jarring, but incredibly important to understand the man he was and his position in this story. Here's Aramayo speaking about the formulation of Ned's honor code:

I do feel like that's a lesson learned for Ned about like honor and beginning to sort of — because the told story is that Ned beat Arthur Dayne, which is of course, certainly in the portrayal [in 'Oathbreaker'], kind of untrue, really. And I think that speaks to how honor began to sort of operate for Ned and I would argue that in the [subsequent] years, he would live his life from an honorable place, having been dishonored in this moment.

It seems clear based on this moment that Bran's visions are going to be used to force us to reexamine the realities we thought we grasped. Like the characters in the story, we have beliefs about history and characters that we take as gospel truth, and these visions can, and probably will, be used as an opportunity to show us the real people behind the legends. It's easy for characters to shine brightly in our memories, with the distance of years removing some of their tarnish, but way more interesting to get a little closer to see how they tick and why. Plus, as they always say, history is written by the victors, so there are always going to be times when the party line diverges from what actually happens

It will be interesting for Bran and the audience both to have to grapple with that and navigate the new reality. So, as much as I hate being on the hook every week, and not knowing in advance how things are going to turn out, I honestly can't wait to see how they explore things from here.