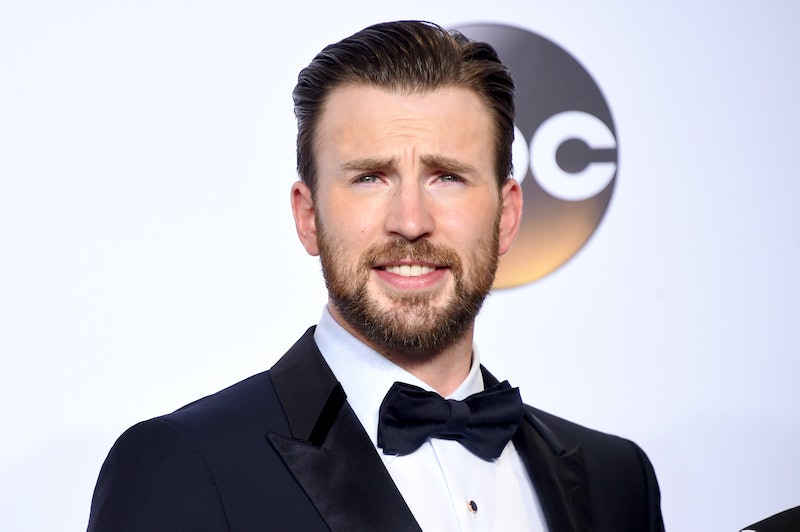 Rumor has it that actors Chris Evans and Jenny Slate are an item, which is part seemingly random and part absolutely adorable, especially when you hear the two recount how they first met. According to People, Slate (who reportedly split from her husband of four years several weeks ago) and the Captain America star first met while filming their upcoming movie, Gifted, in which the actors both star. In fact, Evans and Slate recently discussed their first meeting with Anna Faris on her podcast, Anna Faris Is Unqualified. And you guys, it's all sorts of sweet.

"Oddly enough, I've only known Jenny for a few months which is insane to say," Evans revealed. "It doesn't [feel like that] at all." He then went on to discuss his female best friend from "back in Massachusetts," Tara, comparing that relationship to his one with Slate's.

"Sometimes you just meet the same animal," the actor said. "And that's just [what it's like] with Jenny."

Slate, for her part, said she was initially nervous to meet the Hollywood hunk because of how, well, masculine he is.

"I didn't know what to expect when I met Chris, I was a little scared because I kind of felt like, 'Well, I don't know him. He's a giant man with huge muscles and he's Captain America. How could we ever connect?'" she recalled. "The first night we hung out I was like, 'Wow, I could hang out with Chris for like 90 hours.'"

According to IMDb, Gifted is a drama about "a man [who] tries to raise the brilliant young daughter of his dead sister, but battles his mother over custody" that was filmed in various locations in Georgia, including Savannah, Atlanta, and Tybee Island. In addition to Evans and Slate, the movie also stars Octavia Spencer.

But despite the heavy material in the film, it's clear that the cast had a blast on set — enough for the actors to grow close. "If you don't know @jennyslate and @octaviaspencer I feel sorry for you," Evans tweeted in October 2015. "Do yourself a favor and get on board!! #FF."

"They're enjoying spending time together," a source told People about the couple. And I can't wait to see how it all unfolds.