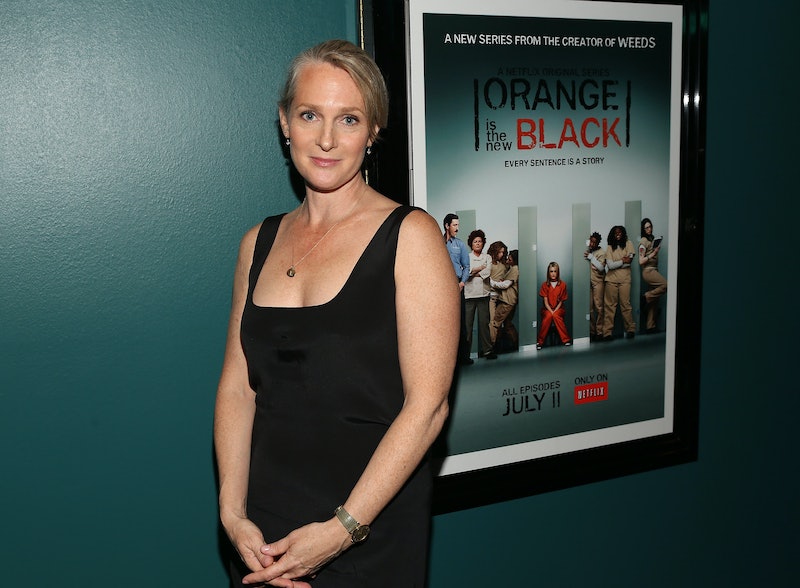 Are you a fan of Democratic frontrunner Hillary Clinton? What about Orange is the New Black? And might you also have a healthy, considered dislike for presumptive Republican nominee Donald Trump? If the answer to all or even just a couple of these questions is yes, then you'll probably like this: Orange Is The New Black's Piper Kerman backed Hillary on Twitter, complete with a little jab at the Donald.

Kerman, in case you're not intimately familiar with OITNB, is the author of the book the hit Netflix series is based on, as well as its protagonist. She's not actually an actor in it, to be clear — her part is played by Taylor Schilling. The story does come from a profoundly personal and biographical place, however, as it tells the tale of Kerman's time spent in a minimum security women's prison following 1998 convictions for drug trafficking and money laundering. If you've never seen it, it's definitely worth a look, weaving together hugely compelling stories from a very diverse cast.

In any case, after somebody tweeted at Kerman on Wednesday joking that "Trump getting elected after Obama was not what they meant by Orange is the New Black," the acclaimed author retweeted it and shot this back.

So, there you go — Kerman is for Clinton! If it's not obvious, the joke here is at the expense of Trump's rather generous orange tan, which many commentators (and even his former primary rival Marco Rubio) have accused of being a spray-tan. That's why his eyes look a little off sometimes — his face is a sort of bright orange, but the rings around his eyes are a much lighter, pinker tone. As Jacqueline Cutler noted for the New York Daily News in March, you might call this phenomenon his "reverse-raccoon eyes."

Kerman hashtagged the tweet with both #ImWithHer and #NeverTrump, which is notable in that #NeverTrump is actually a predominantly conservative hashtag, conceived back when mainstream Republicans still thought they had a shot to stop his march to the nomination. The #ImWithHer part, on the other hand, is the Clinton campaign's go-to hashtag, so you've probably seen that plenty of times before.

Also, as a Twitter search demonstrates, it's the first and only time she'd ever used it, although she has tweeted about the Democratic primary process before. All in all, it's just a little more star power the former Secretary of State can claim in her presidential campaign.