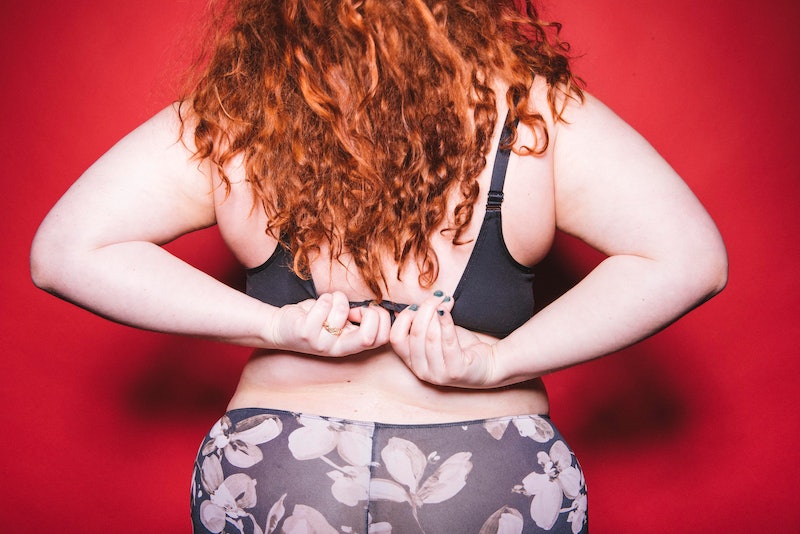 According to a 2014 survey by Cosmopolitan, approximately 90 percent of Millennial women have taken nude photos. Of the 850 readers surveyed, only 14 percent regretted snapping the pics, while the majority 82 percent admitted that they'd likely take some again. I remember stumbling upon this survey back then, and not feeling particularly surprised by the results. Most Millennials I knew had owned camera phones since at least seventh or eighth grade. And most certainly used those camera phones to take and share nudes from time to time.

Although the prospect of images being leaked or shared with folks they shouldn't be shared with might seem like the biggest risk involved in this practice — á la Jennifer Lawrence, Rihanna, Ariana Grande, the Olsen twins, and more in the mega celebrity nudes leak of 2014 — the same Cosmo survey revealed that 91 percent of nude photo-takers had never had their images unknowingly shared with a larger audience.

The realities of living in a digital age are complex, but the hybridizing of sex and technology feels pretty unavoidable in my eyes. It's not to say that nude photos must be intrinsically sexual, of course. But oftentimes, at least from my experiences and conversations with those around me, they're linked to sex and relationships. We Millennials have more or less grown up with the World Wide Web and at least 3G service, so utilizing these things when it comes to connecting with loved ones, or connecting with our own bodies, makes a lot of sense. So despite the messaging of anti-nudes after school specials, there are plenty of reasons not to be ashamed of your intimate images. Here are nine of them.

Most of us can probably agree that the world can't seem to make up its mind when it comes to nudity. One moment, nude or suggestively nude images of women are being used to sell us yogurt. The next, we're being told that showing off our bodies in their natural form is inappropriate. What will our future children think? What will potential employers say if they find out? What will Grandma Annie have to say to her Bible studies group about this?

I'd venture to say that the line women are so often meant to toe — sexy, but not too revealing; modest, but not too prudish — creates particularly strong sentiments regarding nudity. How much nudity is too much? How much is not enough?

The truth is that there probably isn't "too much." If you're comfortable with your nude body enough to be taking pictures of it — whether they're for yourself, for a partner, or for an art installation — then that should be the end of the story. There's nothing gross or immoral about nudes. We get naked every day, after all: When we shower, when we have sex, sometimes when we crawl into bed at night. It's how we came into this world, and there's nothing uncouth about owning your natural state.

After puberty, everything from how often we crave sex to how much we enjoy self-serving sexual practices to how turned on or not turned on we are by naked photos becomes pretty subjective. But no matter how your sexuality is manifesting — provided no one is being subjected to blurred or abused consent — is OK. If one way is through the use of nudes, so be it.

For a lot of people, nude images are one component of sexuality. If you don't believe that sex is taboo, the nudes that can often accompany it shouldn't be, either.

3. Nudity Can Even Be Artistic

Hello, Francisco de Goya, Gustav Klimt, Peter Paul Rubens, and everyone else who's been turning nudes into artwork since the 16th century. Clearly, these guys figured it out long before we did: Nudity isn't distasteful or hideous or improper. It's usually just, well, beautiful.

When something becomes taboo (like being nek-ed!), embracing the matter in question can often be quite subversive. Take the contemporary work of Substantia Jones and her Adipositivity Project, for instance: Photo upon photo of empowered, naked, fat individuals reveling in the bodies they're so often told are damnable, undesirable, and wrong for simply existing. These nudes challenge discriminatory perspectives, and for that reason are not only artistic, but necessary.

Few people, at least in progressive circles, would argue that sexism is long gone. One particularly irritating way that it often manifests is the divide between the utilization of our naked bodies for profit or for the male gaze versus the utilization of our naked bodies for ourselves. We often grow up conditioned (be it consciously or otherwise) to believe that nudity is only acceptable if it's being used to please others, but wholly unacceptable if used for our enjoyment alone. Nude images are one way of turning these tropes inside out.

In much the same way that women and feminine people have reclaimed traditionally "feminine" practices like acrylic nails, or pink dresses, or glitter everything as a way of weaponizing and owning said femininity, so too can our nudity be reclaimed. The truth is that nudity doesn't have to be for anyone else. Taking pleasure in your body should be allowed on a solo level as well. We just don't usually hear as much.

Even if you are sharing your nudes with other people, that can be a useful tool as well. You're hopefully choosing to present your nude body in the way that feels best to you — be it through positioning or lighting or whatever else might cause a surge of empowerment to drift through your soul.

If you're being manipulated into nudes for any reason, that's of course a different story. My advice is to always ask yourself who the nudes are for. Are they for you? For you and a partner? Or just for the receiver? When option three is the case, that's probably a good sign not to click the camera icon.

I was in a long distance relationship with my now-husbo for the first two of our five years together. I know how much that shit sucks. Even if you don't consider yourself a particularly sexual person, the emotional burdens of separation are a lot for anyone to deal with. And if you do consider yourself a particularly sexual person, the sexual and emotional burdens might be enough to send you off the rails.

My partner and I have what I can only describe as the equivalent of hanger when it comes to our sex lives. If it's been a while, our irritability skyrockets. I'm not saying swapping nudes was the ultimate solution to our LDR woes, but it certainly helped.

Sharing nudes felt like a naughty little secret we could cultivate no matter how far apart we were. We could surprise each other with them in the middle of a particularly crappy day. We could exchange them in the evenings with a side of dirty talk and feel a little comforted. I don't think either of us had the kinds of personalities that would have survived a long distance romance in the times before technology. But I must say, I'm pretty grateful to the nudes that helped get us through.

Want more self-love inspo? Check out the podcast below, and be sure to subscribe to The BodCast for more radical body positivity.

6. Not To Mention Keeping Things Lively

Even if you're not in a long distance relationship, chances are you want to preserve some form of excitement in your romance — especially if you and a partner (or partners) have been together for a while. Maybe you all find yourselves working nine-to-fives that regularly turn into nine-to-tens and you're just not seeing much of each other. Maybe you haven't been able to have sex in a while because of roommates. Maybe somebody isn't particularly into period sex, so you're going on five days and feeling kind of bored. Nudes might just be the spice you've been looking for.

7. Trust Is An Essential Component Of Relationships

The thing is, the main way your photos might be shared with the unintended (unless you're the victim of a hacking scheme) is if the receiver chooses to share them. Sending nudes is a huge act of confidence in your relationship with that person, and that can definitely be a scary thing. If you value your privacy (and the privacy of your nudity), it might be difficult to get over the mental hurdles of sharing such photos with anyone.

Only you can decide how much you trust the person on the opposite end of the phone or computer — but from my own experiences (and those of 91 percent of the women surveyed for Cosmo), unintended sharing hasn't been an issue. I wouldn't recommend sending your nudes to just anyone, unless you're down with the possibility of them ending up in other people's hands. But if you truly trust the person you're shooting them over to, you'll hopefully have little to worry about. The trust you're both demonstrating by exchanging such images might even strengthen your bond.

A friend of mine once told me that he believes privacy is an overrated concept fueled by barriers we put into place that prevent us from ever actually getting to know people. This isn't to say that no one is entitled to their own definition of privacy — and I for one totally understand wanting to keep certain aspects of your life to yourself and those closest to you. But when it comes to sharing nudes, the fact that a photo is a permanent object makes it easier to place more weight (and thus more privacy) on an image than on IRL nudity.

Maybe capturing something through photography feels more vulnerable. Maybe it's the fear of unwanted eyes on said photos. Regardless, I think we need to stop drawing such concrete distinctions between curated nudity and the in-the-flesh kind.

When you remember that the person you're shooting nudes over to will often have seen you unclothed already, and therefore isn't likely to be surprised or shocked or confused by anything they receive, it might help remind you that there is nothing more offensive about text message-friendly nudity than any other method or manner. The reality is that one way we connect to other people, particular in romantic or sexual connotations, is through the use of our bodies. And images of those bodies are only extensions of that.

9. Showing Love For Your Body Is A Good Thing

I went through a stage in college of taking nudes purely for my own pleasure. This was as I was discovering fat acceptance literature and opening my mind to the possibility that bodies were meant to look quite different to one another — and I was actually starting to enjoy the look of my own.

I spent many years between the ages of about 10 and 21 avoiding mirrors at all costs. During the times when I was fat, I tried my best to never actually look at the rolls or wobbles on my body — choosing instead to wash myself or apply body lotion while averting my gaze to the ceiling.

Once I realized that my body itself wasn't shameful, nudity became a way of celebrating that fact. I rediscovered the way my body actually looked, and by capturing that reality, I learned not only to accept it, but celebrate it.

At the end of the day, this is the reason I most support people's use of consensual and empowered nudity. When we're so often expected to dislike the way our bodies look — and even actively work towards changing those bodies into something they aren't — choosing to push those expectations aside in favor of self-celebration can feel radical. Whether a radical act you're doing on your own, or one you're choosing to share with a friend, partner, potential partner, or otherwise, you might just be reclaiming your femininity, your sexuality, your body, and anything else that's been used against you.