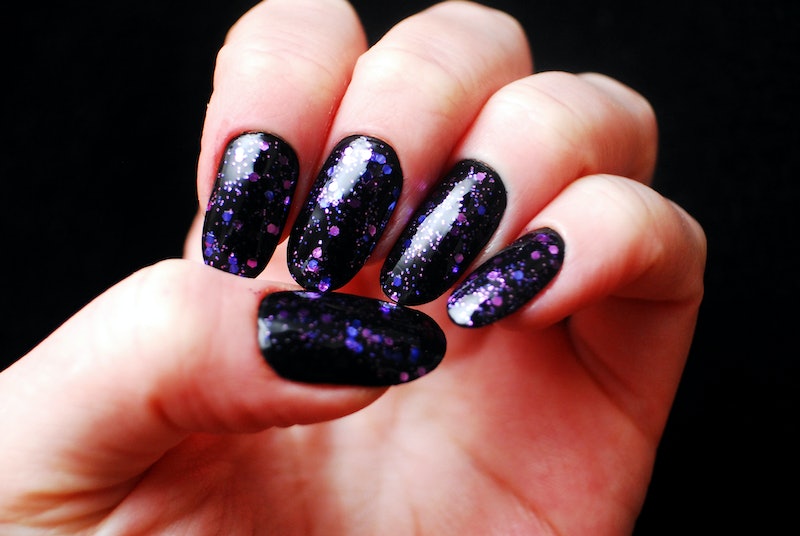 If you ask most people about whether getting acrylic nails is an act of feminism, most will probably tell you that it doesn't exactly seem like a middle finger to the patriarchy. Long and false nails are undeniably perceived as feminine traits in our society, but not necessarily girl power-inducing ones. There are many ways in which being feminine can be feminist, however, and allowing femininity to continue to be demonized is arguably just contributing to patriarchal beauty standards. Of course, having "nice" nails in and of itself could be perceived as a socially constructed beauty standard, but I believe we can weaponize femininity-focused constructs of beauty and reclaim them for ourselves.

Wearing acrylic nails makes me feel fierce, feminine, and just that little bit more prepared to deal with the day. There are loads of issues you have to deal with as a false nail fan (like trying to eat pizza or attempting to pick pennies up from the floor), but fighting with your feminist morals shouldn't have to be one of them.

Whether you're wearing nails to feel feminine in a way that aligns with your personality and style, or because they give you a bit more confidence, or just because having 'em makes it way easier not to have to worry about your nails for two weeks, your acrylic nails definitely have some feminist messages to give off to the world.

By reclaiming and weaponizing a beauty standard (in this case, having "pretty" or "prim" nails), women can trump the expectation that others arguably have of them and turn a unique interpretation of the "standard" itself into a source of empowerment and self love. With claw-like fingers and air of confidence, we can give off majorly secure, independent vibes.

Galore Magazine suggested that men don't like false nails (along with rompers, ridiculously high heels, and oversized sunnies). Guys who judge you based on what you wear aren't worth your time, though. So if your acrylics are scaring someone away, consider yourself in possession of a red flag.

3. Its An Exaggerated Type Of Femininity

By exaggerating a beauty standard like "feminine nails" to extra long, pointed ones, we can arguably show the ludicrousness of beauty standards in the first place. You want me to have "pretty" nails? Well, I'll show you what that means to me.

Why not cast a spell on all misogynists with your witchy claws? You'll be a total statement maker — and that statement can certainly be a feminist one if you so wish.

The patriarchy arguably demonizes femininity (you know, by correlating it to weakness and general inferiority), which is why women and, to some degree, feminine men are so often subjugated. To simply eschew femininity as a patriarchal concept means contributing to the demonization of that femininity. If instead we reclaim it as a part of our movement — fake nails included — then femininity can be decidedly feminist.

6. You Can Use Them For Self Defense

There's something deliciously dark "woman" about scratching someone. You probably shouldn't do this every day just for the hell of it, but it's good to keep in mind when worrying your way down a dark street. You're literally weaponizing femininity.

7. They're Perfect For Decorating

As proven by this amazing manicure, your nails can give a less than subtle feminist message to the world if you choose to go all out.

Whether the intention behind your false nails is feminist or not, the next time a misogynist accuses you of conforming, mentally scratch their eyes out with these feminist nail theories.

More like this
I Have Eyebrow Alopecia – & Microblading Gave Me My Confidence Back
By Jessica Morgan
42 Black Owned Fashion & Beauty Brands To Support Today & Always
By Mekita Rivas, Shea Simmons, Kui Mwai and Dominique Norman
Hailey Bieber's "Glazed Donut" Nails Are So Minimalist Chic
By Danielle Sinay
30 Rainbow Nail Designs For Pride Month & Beyond
By Summer Arlexis and Audrey Noble
Get Even More From Bustle — Sign Up For The Newsletter