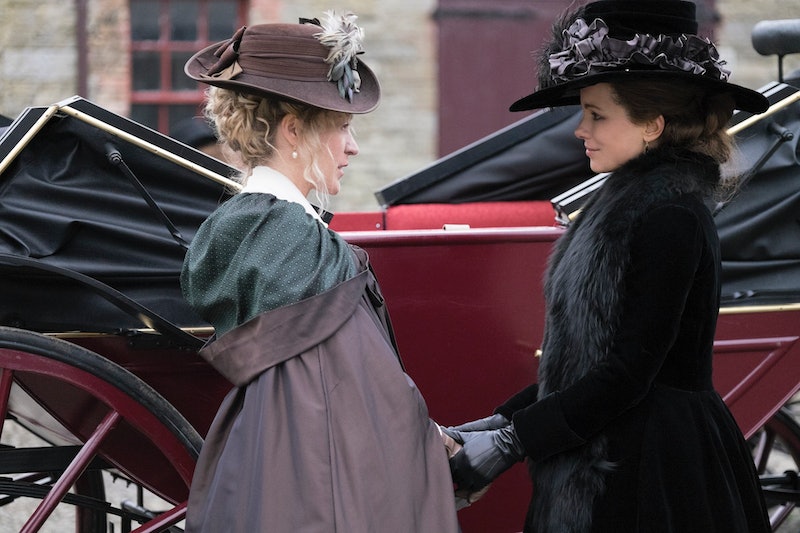 The new film Love and Friendship tells the story of Lady Susan Vernon, a widow in late 18th Century England. Far more of a free spirit with a more unconventional personality than anyone else around, Susan shows up unannounced at her brother-in-law's estate and intends to stay — at least until she can find a husband for her daughter and a new one for herself while she's at it. With its focus on a woman who defies categorization and rebels against a system meant to hold her down, many are hoping that Love and Friendship is based on a true story. So is it?

Unfortunately, no, Love and Friendship is not based on any real tale. It does however, come from the next best place. That's because the film is based upon a book by Jane Austen, one of the most important feminist authors of all time who is best known for her deconstruction of Britain's absurd and sexist 18th Century society, as seen in her works like Pride and Prejudice and Sense and Sensibility . Austen fans may be surprised to hear this, given that Love & Friendship is hardly a recognizable name for one of the author's works. And oddly enough, that's not even the name of the book the movie is based on.

Love and Friendship is actually based upon a novella by Austen called Lady Susan that went unpublished in her lifetime. The book is believed to have been written around 1794, but wasn't published until 1871 — 54 years after Austen's death. So why then is the film called Love and Friendship, and not Lady Susan? For that, one has to go even further back in Austen's catalogue to an even more obscure piece; and to one that keeps with the familiar title structure of Austen's most popular works.

Austen was a writer long before she started churning out acclaimed novels. She was constantly churning out stories throughout her life, and a number of these works have seen the light of day in three volumes of her juvenilia, or childhood writings. One of these early stories, which can be found in Volume Two of Austen's juvenilia, is a short story called Love and Friendship. Written when Austen was just 14, the book serves as a parody of the romance novels of the time, and showed the young author's developing wit and willingness to subvert the tropes of the genre.

So although it may not be familiar to most casual Jane Austen fans, Love and Friendship is indeed based upon the legendary author's works. And by drawing its plot from one story and its title from another, you'd be hard pressed to find a movie out there that is more representative of the author.