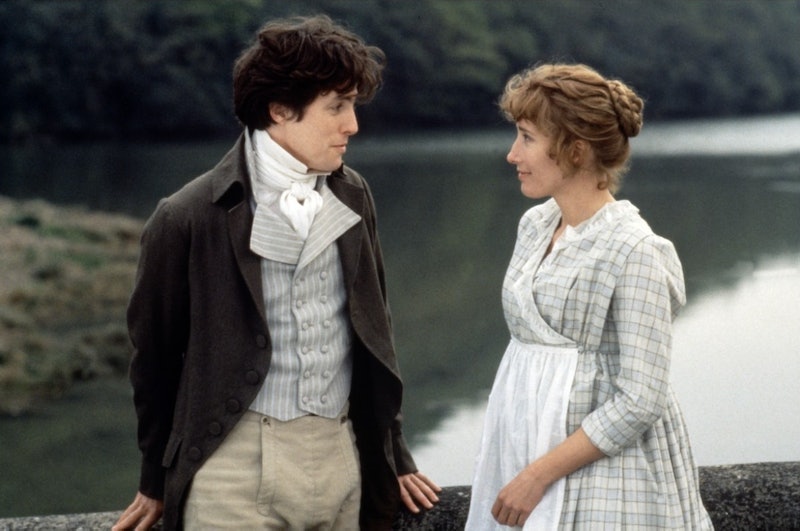 If you have a sister — or a best friend who’s close enough to be your sister — you can probably relate to Jane Austen’s Sense and Sensibility . The story of Marianne and Elinor Dashwood, sisters who would do anything for the other yet are completely different, is a beloved favorite and the basis of Emma Thompson’s award-winning film adaptation. Maybe it isn't usually thought of as romantic like Austen's other novels, but there is a special place in my heart for Sense and Sensibility.

Though I don’t have any sisters, I could still relate to this book in my relationships with friends (and even with myself — who doesn’t feel a little like Marianne sometimes, and a little like Elinor other times?). How many of us has that one friend who gets swept up in the emotion of the moment? Or what about that friend who keeps her feelings locked inside a chest behind five more locked doors? The beauty of Jane Austen is that her characters and stories might be specific to the Regency era, but the stories are ones we still know and love. That’s why it’s so easy to transfer her books to modern adaptations ( From Prada to Nada takes Sense and Sensibility into the 21st century, for all you Clueless fans out there looking for more to watch). Sense and Sensibility proves through the following quotes that you can be both passionate and guarded and still find your happiness.

"The more I know of the world, the more am I convinced that I shall never see a man whom I can really love. I require so much!"

Marianne, who had the knack of finding her way in every house to the library, however it might be avoided by the family in general, soon procured herself a book.

"My loose cash, would certainly be employed in improving my collection of music and books."

"Sometimes I have kept my feelings to myself, because I could find no language to describe them in but what was worn and hackneyed out of all sense and meaning."

"I WILL be mistress of myself."

She was stronger alone, and her own good sense so well supported her, that her firmness was as unshaken.

"A man who has nothing to do with his own time has no conscience in his intrusion on that of others."

She knew that what Marianne and her mother conjectured one moment, they believed the next—that with them, to wish was to hope, and to hope was to expect.

"And books! ... She would buy them all over and over again: she would buy up every copy, I believe, to prevent their falling into unworthy hands."

"Know your own happiness."

For though a very few hours spent in the hard labor of incessant talking will despatch more subjects than can really be in common between any two rational creatures, yet with lovers it is different. Between THEM no subject is finished, no communication is even made, till it has been made at least twenty times over.