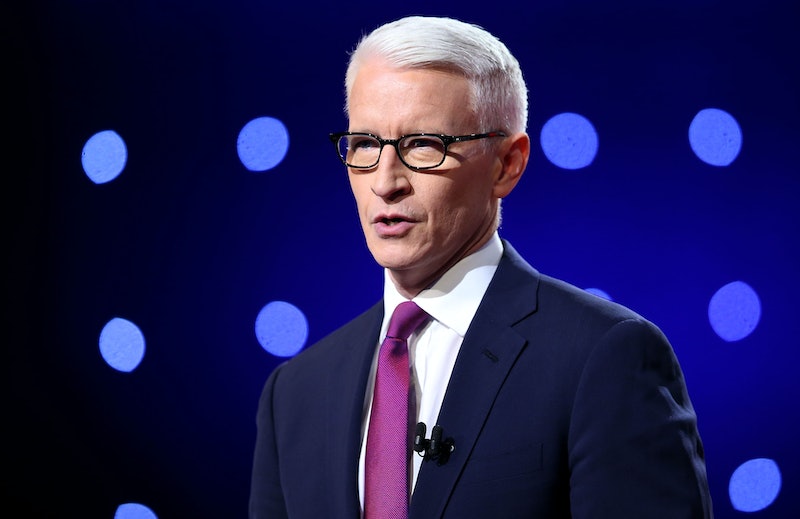 There has been a shakeup in the world of daytime TV. On April 19, Michael Strahan announced that he was leaving Live! with Kelly and Michael to join Good Morning America full-time. Though previous reports suggested that the co-host would stay on Live! through the summer, it now seems that those plans are changing. Us Weekly reported that Strahan will leave Live! on Friday, May 13 and in a statement, the show said that one of the reasons for the early departure was so that it could "immediately begin the on-air search for a new cohost." So who could potentially take over Strahan's duties for good? Rumor has it that none other than Anderson Cooper could become Ripa's Live! co-host.

Obviously, CNN journalist Cooper would be an excellent addition to literally any show ever (at least, in my personal, Cooper-adoring opinion). However, there's more than just that reason for why Cooper might be joining Ripa this time around. For one thing, Cooper and Ripa are pals, with Ripa even interviewing Cooper on some very personal stuff during his appearance on Watch What Happens Live! in 2014. And speaking of Watch What Happens Live!, a recent interview with Cooper on the Bravo talk show suggests that he's not opposed to joining his pal Ripa on the show. When asked by a fan about Strahan's departure and whether Cooper himself would be interested in carrying the torch, he said:

"I love Kelly, and I think she's the heart and soul of the show, and that it's going to go on and continue to be great... I'm very happy at CNN, and it would be a dream to work with Kelly, but nobody's offering anything, so..."

OK, OK: so Cooper's not exactly jumping at the chance to co-host Live!, but he's definitely not saying that a job offer would be met with a hard no. After all, Cooper may love CNN, but he could certainly juggle both gigs. (As Andy Cohen put it, "it's the age of Seacrest," and who is more competent than Cooper?) Ripa certainly isn't ruling it out: according to Entertainment Tonight, she told People that fans should "stay tuned" when asked whether Cooper is joining the show as her co-host.

That's certainly enough reason to stay hopeful about a Cooper/Ripa alliance — and it might just make Strahan's departure a little less sad.