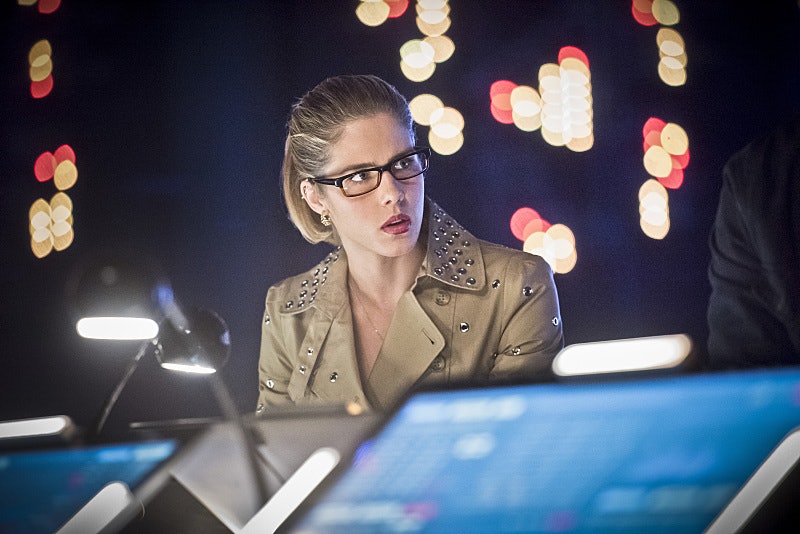 I have never felt more sympathy for Felicity Smoak than I do right now. Because as much as she tried (and nearly succeeded) in taking Rubicon down, there was still one lonely missile that managed to get launched... and it was headed right toward the city of Monument Point. (Hence this week's episode title.) And while there was no way to stop the missile from landing somewhere, it was possible to make it hit a less populated target, thanks to a little GPS realignment program. This forced Felicity to make an impossible decision on Arrow — where should she re-route the missile instead? Unfortunately, that terrible fate fell to a place called Havenrock, where the number of casualties would be sufficiently less severe.

The good news is that the plan worked. The millions of people currently living in Monument Point were saved from certain death. However, that doesn't take away from the fact that Felicity basically had to sentence other innocent lives to death and I'm worried that she may never recover from the guilt. It was going to be a lose-lose situation either way, and she did what she thought she had to by sacrificing thousands in order to save millions. But it's a heavy burden she'll have to bear for the rest of her life nonetheless.

We've seen our beloved Miss Smoak recover from some pretty terrible things in the past, from the temporary loss of Ray Palmer to the terrible accident that left her paralyzed. But this is a completely different trauma for her to deal with. For her, it won't matter that she pretty much just saved the world from total annihilation. All she'll remember is the fact that the people are Havenrock are no longer around because of her actions.

Don't get me wrong, I don't blame her in any way for what happened. In fact, I've never wanted to comfort her more for the impossible choice she was forced to make. But I just know that she's going to beat herself up over this because she's a good person who cares about people. I bet she would've sacrificed herself to save them all if she could have. Let's just hope that in time, she'll be able to forgive herself and realize that there's only one person responsible for all of this unnecessary death and destruction: Damien Darhk.

More like this
'Stranger Things' Fans Are Begging For Steve To Live For The Funniest Reasons
By Grace Wehniainen
'Criminal Record' Is The 'Doctor Who' Reunion We’ve All Been Waiting For
By El Hunt
Emilia Clarke Shares More Details About The New 'Game Of Thrones' Series
By Maxine Harrison
“The Door Is Always Open” For Another 'Breaking Bad' Spin-Off, Says AMC Boss
By El Hunt
Get Even More From Bustle — Sign Up For The Newsletter