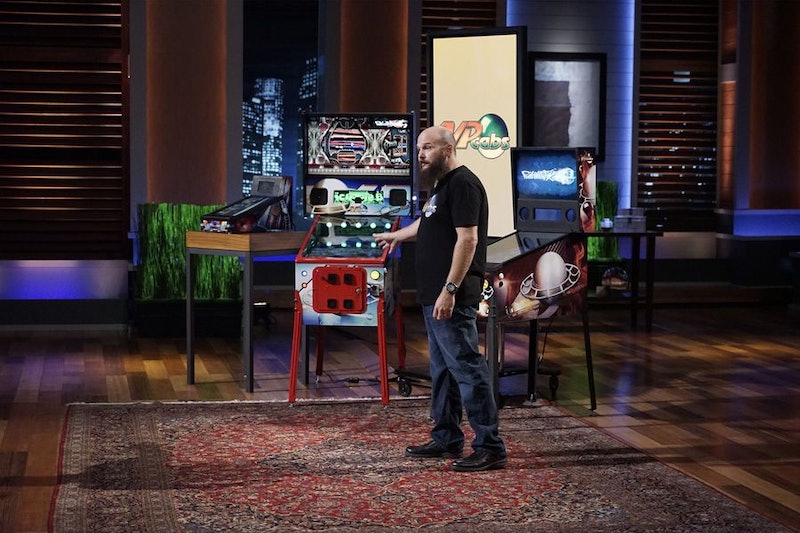 It seems like people today are obsessed with nostalgia more than ever before. With that, a lot of companies like to put their own unique spin on products of yesteryear and update them for the modern age. That's exactly what VPcabs' pinball machines, featured in Friday night's Shark Tank , has done.

While there's certainly a market for companies with that point-of-view, I don't know if the Sharks will be so interested in investing in a company with that sort of brand messaging. The Sharks are all about the next big thing; they don't like to look back.

Of course, if VPcabs is a success, they'll be almost forced to pay attention to it during Friday night's episode. But I have a feeling VPcabs' wares will be eye-catching enough to get the Sharks interested. Who knows? They may even start to feel a little nostalgic themselves — if they're able to feel any sort of emotion at all, that is.

Once you take a look at what VPcabs is selling, you're sure to be dazzled no matter what the Sharks have to say about the company. It sells an item that is always a crowdpleasing attention-grabber. Have your quarters ready, and get acquainted with it below.

It's A Modern Update To A Classic Item

VPcabs is a bit of a cryptic name for a company, so I don't blame you if you couldn't figure out what the firm sells by its moniker alone. Well, I'm happy to tell you that VPcabs manufactures and sells virtual pinball machines. You know how traditional pinball machines feature an actual silver ball that you have to keep in the game using a bunch of moving parts, such as two flippers? Well, VPcabs' pinball machines are built with computers and HD LED screens that can hold more than 200 games, according to a press release about the company's upcoming appearance on Shark Tank. So yeah, it's pretty rad.

It's An Improvement Over Old Machines

Some people may prefer the look and feel of classic pinball machines, but owning a virtual one definitely has its advantages. "Owning a virtual cabinet saves space, reduces repair and maintenance, and gives players a wide variety of games to suit all tastes," the press release said. You can't really argue with those benefits.

They're Built To (Near) Perfection

When VPcabs first started, it built pinball machines by hand, which would take about three to four weeks just to put one together, according to the above promo video. The company also retrofitted old, abandoned pinball machines with the screens to make them all virtual-like.

These days, the process of building a VPcabs machine is a lot different since the process has been automated with a custom CNC machine and separate areas for assembly, painting, and graphics, as the above clip shows. The pinball cabinets are now custom-designed to fit the monitors that are built in a CAD program. All of this means that VPcabs can produce way more machines per day without losing that personalized touch customers love.

Get Into The Game Now

As you can see, VPcabs makes some pretty sweet machines, and lucky for you, they're available for purchase from the company's official online store now. There are currently four different designs available: The Vertigo (starting at $3,495), The Mini ($3,995), The Classic (starting at $5,495), and The Wizard (starting at $7,995). Most of these can be updated with nifty add-ons, too.

You Can Customize Your Own

If you don't like any of those options, VPcabs will customize a machine for you, as the company describes on its website. My guess is that would be a much pricier way to go, but boy, would it be beautiful.

The Founder Started The Company As A Challenge

Brad Baker, who has worked in the electronics field for 15 years, according to the above video, started making virtual pinball machines after his brother asked him to build one for him. Baker accepted the challenge and built a virtual pinball machine for one of his brother's arcades, according to the company's press release. Pretty soon, Baker got orders for machines from a bunch of other people, and he took it to the next level by making VPcabs a full-fledged company.

But will Baker be able to earn a high score when he appears on Friday night's episode of Shark Tank? We'll all have to gather 'round our TVs to see then.