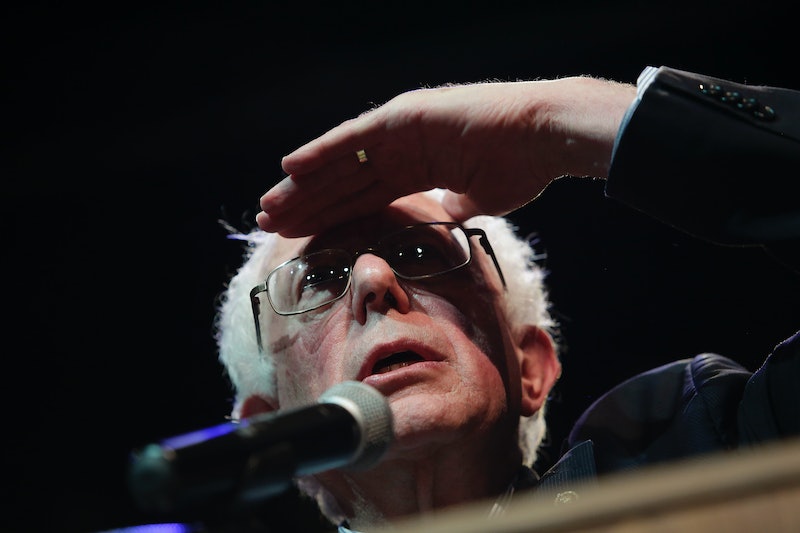 This election year has been anything but ordinary, so it should come as no surprise that yet another candidate may be looking to set conventional politics aside by picking a vice presidential running mate before the nomination is all but locked down. We saw it first when Ted Cruz chose Carly Fiorina. Next, there were whispers about Hillary Clinton picking Joe Biden — arguably the most experienced candidate for the job, on either side of the aisle. As one of three candidates left in the race, here are six unconventional vice president picks for Bernie Sanders that I absolutely think he should consider.

Indulge me in my desire to play fantasy politics for a moment, and keep an open mind about the following potential running mates for Sanders. They each have their merits (and demerits) but all deserve (at least a smidgen) of serious consideration from the Sanders side. These Veep picks would be especially helpful if Sanders wants to consider every conceivable opportunity to engage his base, turn out new and disillusioned voters, and keep his fundraising numbers competitive.

Let's take a look at how this diverse group would play with his voters during a hypothetical general election matchup against the presumptive GOP nominee, He-Whom-Shall-Not-Be-Named.

Cons: Raises the crotchety old man quotient several levels, may be confused by some of Sanders' base with artist/activist Questlove's father

Dr. West would be a brave choice for Veep. The outspoken activist and scholar has already endorsed "Brother Bernie" early on in his bid for the White House, and he could create a ticket that would represent a formidable intellectual challenge against Donald Trump. On the other hand, Dr. West's national name recognition exists, but it isn't necessarily that high. The last thing Senator Sanders needs is to have people think that he's sharing the ticket with Questlove — and for the record, two Millennial voters leaning towards Senator Sanders didn't know who Dr. West was until I said "the professor who looks like Questlove's dad."

Pros: Arguably the candidate with the most relevant experience for the gig

Cons: One of the oldest tickets in recent memory

VP Biden would be a natural choice for Sanders' veep. He's been vetted, he has experience, and it would introduce a narrative of continuity with the current administration. Sanders' messaging apparatus has struggled somewhat with this point; Clinton has been touting her connection with the Obama administration as another credential in her cap from pretty much day one.

Pros: Also knows how to be the Veep, could help actualize the creation of a 21st century green economy, could pull over some southern states/Clinton's base

On paper, former Vice President Al Gore might make more sense as a potential veep than Biden does. Sanders' energy and climate policy is a pretty bold, forward-thinking proposal that calls for a complete transition away from hydrocarbon fuels to a 100 percent renewable-energy powered economy; one of Gore's signature issues.

Inviting Gore to make a repeat showing on the Democratic ticket as veep, and giving him the huge task of managing the transition to a clean, green, economy would be poetic justice for voters who felt cheated by the Supreme Court's 2000 Bush v. Gore decision. Additionally, it would demonstrate continuity with parts of the party establishment, and it could help make sure Sanders snags some southern states away from Trump. However, it is highly unlikely that Gore will help Sanders secure the swing state of Florida's electoral college votes, where Sanders managed to secure just 33 percent of the votes in the state's primary.

Pros: Brings demographic balance to the ticket, gracefully creates an opening at the DNC for a more progressive leader

As a longtime Clinton ally and current chair of the DNC, it might not seem like a logical choice to offer the role of vice president to Debbie Wasserman Schultz, but hear me out. Schultz is up against a tough reelection campaign against challenger and Sanders supporter Tim Canova, and could potentially lose her seat, and therefore her position in the DNC as well.

Offering her the role of VP would be a graceful way to add demographic balance (age, gender, location) to the ticket, as well as being a canny way of converting Clinton supporters to Sanders' movement. It would also be a way to install a progressive as the head of the DNC, should Sanders become president. However, the likelihood that she'd say yes probably isn't very high; Schultz has been a dedicated political foot soldier for the Clintons for years. Bernie's base probably wouldn't be too happy about that, either.

Pros: Great resource for practical tips on how to be a socialist in the White House (just kidding), the ultimate form of continuity with the current administration, first African-American veep

Cons: Kinda too close to pulling a Putin, Michelle deserves a new challenge

It might be a little too Putin-esque for Obama to take the job of vice president, but it isn't explicitly not allowed. Choosing Obama would be a way for Sanders to demonstrate his affinity with the outgoing administration and his respect for Obama's accomplishments. However, it seems a bit unfair to one person in particular, and that is Michelle. For all her grace, and grit, it seems clear to many that the constraints of the office — especially being the first black FLOTUS — have been hard to adjust to. Michelle is a formidable voice in her own right and deserves the chance to unwind, explore new challenges, and reconnect with her husband after eight years as FLOTUS. Someone else will just have to get the job.

Cons: Somehow bears an uncanny resemblance to former VP Cheney from this certain angle, as well

Vice President Larry David may seem a bit far-fetched, but hear me out first. The comedian does a pretty good impersonation of Sanders already, so if Bernie is busy and can't make an event, he can just send David in his place and give the crowd a side-splitting show instead of a typical rally.

And since David has a history as an entertainer, he probably won't feel constrained by the limits of the office, like a more seasoned politico might. He may even have the time to do it, too. It's not like Curb's ninth season is happening anytime soon. (Although on a serious note: I really need another season of Curb Your Enthusiasm in my life right now.)

Senator Sanders should be paying close attention to the possibility of campaigning with a vice president before the DNC convention takes place, and should do so before his opponent has the chance to. Not only will it make him seem prepared, Clinton will appear to be off her game, which could put Sanders at an advantage. Whoever he happens to select, it's guaranteed to be news.