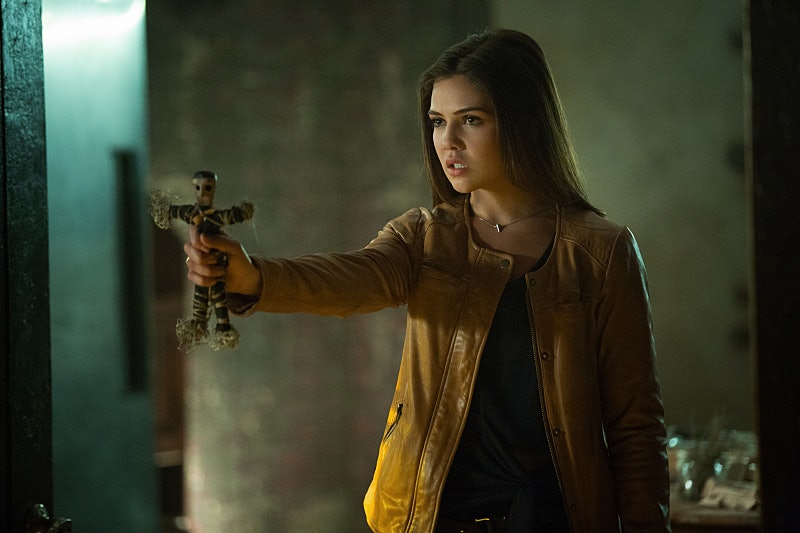 When it comes to The Originals, no one really stays dead for long — unless you’re an enemy of the Mikaelson family. Fans were devastated last week when it appeared that our favorite Originals witch, Davina Claire, died. Not to mention, we were still mourning the fact that Klaus’ quasi-love interest Camille died too. But, I think that Davina isn't really dead and will be back. If we look at the history of the show, people have always been able to come back to life, especially the witches. So while she may be dead, I think we can remain hopeful that Kol and Davina will reunite at some point in Season 4.

So, what are the actors and creators saying about Davina’s potential return? “A lot of it depends on story arcs and availability down the line, but I think it’s going to be up in the air,” actor Danielle Campbell told TVLine. Meanwhile, showrunner, Michael Narducci, gave Davina fans some hope in an Entertainment Weekly interview. “Davina is a special entity. She is a New Orleans witch and we know that those witch souls exist beyond the realm of what we call life. There is an afterlife for witches," he told the magazine. "Yes, Davina is seemingly gone at the end of episode 20, but there’s still more story to tell with the ancestors … there’s still more story to tell with Davina.”

Don’t believe she will be back? Here are eight other people who came back to life on The Originals.

Kol has had like nine lives at this point between The Vampire Diaries and The Originals. He was dead, then Esther brought him back as a witch. Unfortunately for Kol, he was then cursed by his brother Finn. He died and Davina ended up bringing him back in his original body. If Kol can do it, so can Davina.

Esther also brought Finn back from the dead in the body of a witch named Vincent Griffith. He inhabited his body for awhile before Freya put his spirit in her locket. I mean, if you don’t have a physical body, aren’t you pretty much dead? I’m counting that as another death. Finally Freya put him back in his original body and then Lucien killed him one final time. Really though, who knows if he’s actually dead?

The Mikaelson patriarch was originally killed on The Vampire Diaries before he started popping up as a ghost that only Davina could see on The Originals. She successfully brought him back from the dead and then later on Klaus killed him for good. So much drama.

We all thought Hayley was definitely dead when Monique Deveraux killed her while holding Hope in her arms for the first time, but because of Hope’s blood, the death actually made her a hybrid. She came back to life and murdered all the witches who tried to take her baby away. Serves them right.

In flashbacks we saw Celeste’s original death in the 1800s. However, she found a way to come back to life by body-jumping into other witches. Finally in the end Elijah traps her in her original body and stabs her.

Witches can get seriously crafty on The Originals. Genevieve was already one of the dead ancestors, but was resurrected by Celeste. She was ordered to kill Hope if she wanted to stay in human form, but when Hayley turned into a hybrid, Genevieve ended up becoming one of her victims. To be fair, she’s probably still a ghost somewhere.

Mama Mikaelson is another one that just can’t seem to stay dead. She was dead and brought back to life once in The Vampire Diaries. Then in The Originals they consecrated Esther’s ashes and she started jumping into other witches bodies. Freya then murdered Esther. Of course, that wasn't not the end of it, because she was brought back one last time to help the children kill Dahlia. Finally Esther died for the final time, but probably not the final time.

Guys, she already died once. Think back to when she killed herself to complete the Harvest Ritual. After Celeste’s final death, she was resurrected. Proof that if she can die once, and she can die again — and she'll probably come back.