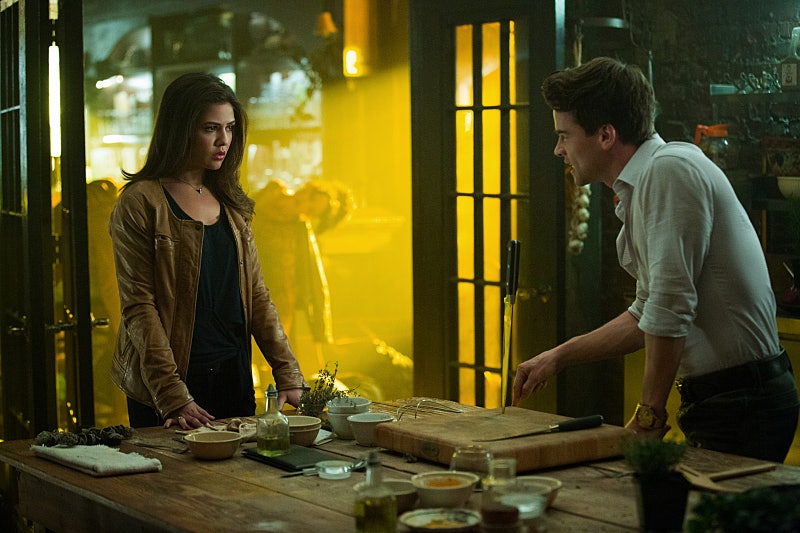 Davina had a pretty explosive reunion with her lover, Kol, on The Originals ' "No More Heartbreaks." After Kol tried and failed to leave town in an attempt to escape the curse the Ancestors had placed on him, he knew he was a danger to Davina and confined himself to the bar. Alas, after a long day that included a confrontation with Lucien and Cami's death (RIP Camille), Davina couldn't keep herself away from Kol. And, long story short: he ended up taking a big bite into her neck and draining her of blood. So, is Davina dead on The Originals ?

Before Kol kinda, sorta killed his girlfriend, Davina learned from Lucien that the Ancestors hadn't just cursed Kol with insatiable bloodlust, they gave him the need to kill her. Desperate and determined not to hurt her, Kol asked Davina to dagger him, let him "sleep" until she finds a way to reverse the Ancestors' magic over him. Davina agreed, and she daggered him there, in the bar. But, after Cami died, Davina returned to Kol's body, still unmoved as everybody else was busy trying to save Cami. And, when she approached, the Ancestors used their magic to dislodge the dagger, bringing Kol back to life with a new thirst. Before he knew what he was doing, he had taken so much of Davina's blood that even when he tried to heal her with his blood, she didn't move.

Even though Davina appeared pretty lifeless at the end of the episode, it's highly unlikely that Davina is dead. It would be ridiculous for The Originals to get rid of two female leads in one episode (again, RIP Cami), so I'm guessing Davina will pull through, especially considering the fact that she is a witch with plenty of powerful friends.

It's also worth noting that the Ancestors wanted her dead for a reason. Something tells me they have much more in store for her.