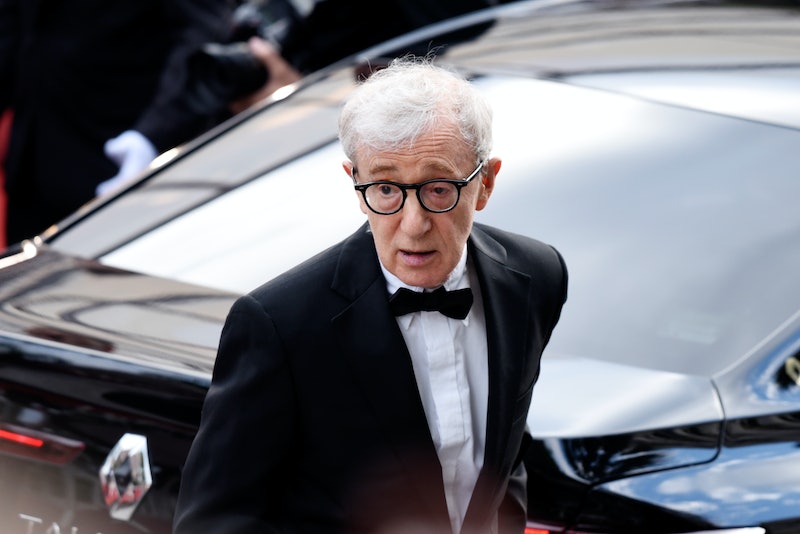 According to numerous reports, the 69th Cannes Film Festival opened with French comedian Laurent Lafitte telling a rape joke presumably aimed at Woody Allen. "It’s very nice that you’ve been shooting so many movies in Europe," Lafitte told the crowd. "Even if you are not being convicted for rape in the U.S." Allen has been accused of molesting his adopted daughter, Dylan Farrow (a charge Allen has repeatedly denied and for which he's not been tried). The joke came moments after the crowd had just finished giving the director a standing ovation, and on the same day that Allen's son, Ronan Farrow, wrote an essay for The Hollywood Reporter that urged the media and those actors who appear in Allen's films — his latest, Café Society premieres at Cannes — to speak out. Farrow has asked the media not to let these allegations die, but instead ask "the hard questions." Or, in this case, maybe tell the tough jokes. But, in Lafitte's case, this Woody Allen joke may have started the wrong conversation.

The media did cover Lafitte's joke, but it was dubbed the "rape joke" instead of the "Woody Allen joke." Variety wrote that the joke "shocked" the Cannes crowd there to see Allen's new film, while the Huffington Post wrote the headline, "French Comedian Targets Woody Allen With Rape Joke At Cannes." The Hollywood Reporter wrote that Woody Allen "endures" Roman Polanski rape joke at Cannes. (Polanski left the U.S. after charges were brought against him for having sex with a 13-year-old girl; he pled guilty to an unlawful sexual intercourse charge, but left the country before the sentencing.) The magazine also reported that there were gasps from the crowd after Lafitte's joke. From these reactions, it's clear that this joke didn't resonate the way it could have. It didn't cause people to question the allegations, but instead had people appearing to side with Allen.

Lafitte's joke could have been what Ronan Farrow was talking about in his essay, a way to get a larger conversation started about allegations against powerful men and how they're often swept under the rug. It could have been a way to get people thinking about the allegations from the point of view of the accuser, not the accused. It did get the media asking questions, but those questions weren't really about the allegations; they were about the joke and its aftermath. According to Vulture, when asked about the rape joke, Allen said: "I’m completely in favor of comedians making any jokes they want," said Allen. "...I am a nonjudgmental, non-censorship person on jokes. I’m a comic myself, and I feel they should be free to make whatever jokes they want." Just like that, the director seemed to separate himself from the entire discussion.

This Cannes joke just didn't hit in the same way that another now famous joke about sexual assault allegations did. Back in October 2014, Hannibal Buress told a joke during a show in Philadelphia that took aim at Bill Cosby and his reputation for talking down to black men, telling them to pull their pants up, by going after his checkered past. "Yeah, but you rape women, Bill Cosby, so turn the crazy down a couple notches," Buress alleged. (Cosby and his lawyer have repeatedly and adamantly denied the over 50 claims of sexual assault against the comedian.) The joke about the allegations became a game-changer for those women who had previously accused Cosby of sexually assaulting them, but were silenced. Following Buress' joke, a New York Magazine cover story featured 35 of Cosby's accusers. From there, more women came forward, all spurring from the catalyst that was Buress' joke. It's something Broad City recently referenced, when Lincoln (played by Buress), told Ilana that "people really shouldn't trick other people into having sex," to which she replied, "I've heard so many women say that. But when you say it, I really hear it."

And the truth is, most people don't want to hear a rape joke, especially if it's based in any real accusations. Buress was able to get people on his side while also getting them to rethink how the allegations against Cosby are being covered. Lafitte, it seems, wasn't. Perhaps it's circumstantial. Buress' joke was told in a crowd of people who were expecting to laugh, while Lafitte told his joke to a group of people waiting to see Allen's movie. This crowd was there in support of Allen, not to address allegations against him. When asked about the joke by Variety, one of Café Society's stars, Blake Lively seemed put off by the timing of the joke, criticizing the choice of venue.

“I think any jokes about rape, homophobia or Hitler is not a joke. I think that was a hard thing swallow in 30 seconds. Film festivals are such a beautiful, respectful festivals of film and artists and to have that, it felt like it wouldn’t have happened if it was in the 1940s. I can’t imagine Fred Astaire and Bing Crosby going out and doing that. It was more disappointing for the artists in the room that someone was going up there making jokes about something that wasn’t funny.”

It's true, rape isn't funny, and neither are the allegations against Allen. But Ronan Farrow's point that we should not shy away from asking hard questions and showing support for those women who do speak up is an important one. Unfortunately, Lafitte's joke didn't do that. It was a joke for joke's sake, an attempt to be topical with no focus on pushing the conversation further. Jokes can be a tool in bringing light to issues that the media just doesn't seem to be covering, even ones that could be deemed inappropriate. But they need to be done right if they're going to get the audience thinking.