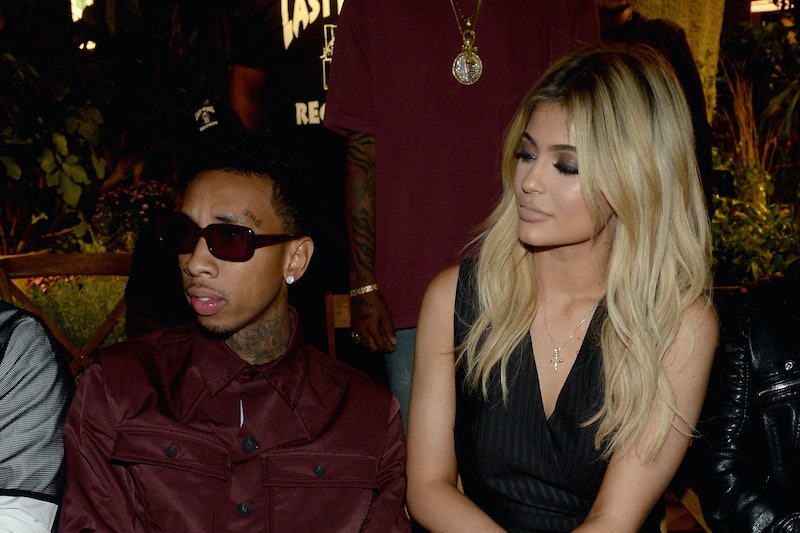 The men in lives of the Kardashian & Jenner sisters are almost as well-known as their powerful girlfriends and wives, so when a breakup happens in their world, it is a big deal. According to TMZ, Tyga and Kylie Jenner reportedly broke up, and it seems that it might be for real this time. The world of the Kardashians is never so cut and dry, though, because rumors like these hound them incessantly. Per TMZ, the couple broke up a few days before the Met Ball on May 2, although they were both in attendance, which means it's time to further examine pictures of Kylie and Tyga at the Met Ball to see if there were already any signs of problems that we missed. You know, other than the fact that they seemed to attend separately.

Plus, the fact that Tyga still attended the Met Ball seems to be a major point of contention in their relationship right now, according to the TMZ report. The outlet claims that Kylie was upset that Tyga "had the nerve" to still go because he was only invited because of her. And now that I think of it, I did find it a tad bit strange that they never posed for a photo together on the Met Ball red carpet, which seems to be a very prestigious celeb couples moment (see: Kanye & Kim every. single. year.). There was also limited photos of them together on their social media from the event, so it seems there were clues in front of our faces all along.

Kylie posted a few shots of her dress while getting ready for the Met Ball, but Tyga was nowhere in sight. He would usually pop up in the background, but not this time.

Tyga also only posted a few solo shots of himself with his outfit by Balmain.

Kim posted a snapchat of their table inside the gala, and Tyga was sitting next to Kylie, but there definitely seemed to be some tension in that shot. I would assume their seats were already assigned and Kim sort of whispered Tyga's name when she introduced him on camera. Hmm...

When Kylie changed her dress for the after party, she posted a photo with the caption, "Big homie betta grow up." Was this a shot at Tyga?

Tyga was obviously hanging out around near Kylie, but he never posted any photos with her and neither did Kylie.

From this photo on Kylie's BFF's page, it seems like Jordyn Woods was her date for the after party.

Tyga and Kylie's lack of photos together certainly points that something was off for them already at the Met Ball. While on her snapchat throughout the night, Kylie didn't shy away from playing and singing along to Beyonce's Lemonade . Was she already dealing with a breakup from Tyga? We might not know for sure, but signs say that something is definitely up with their relationship.