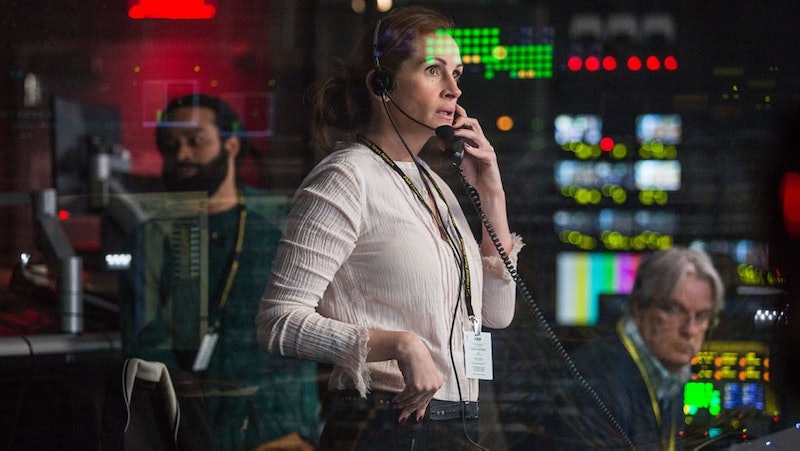 As someone who will happily sit through any movie George Clooney or Julia Roberts touches, I had little doubt that I would enjoy Money Monster, their newest collaboration. The Jodie Foster-directed thriller, in theaters now, stars Clooney as Lee Gates, the host of a financial TV show who gets taken hostage on live air, Jack O'Connell as Kyle, the man who takes him hostage, and Roberts as Patty Fenn, the director who talks Lee through the crisis. As I expected, I loved every fast-paced, heart-pounding of the movie, but what I admired most about it wasn't the acting of its stars, or the sharpness of its dialogue, but the fact that, despite Money Monster being a primarily male-driven movie, it does incredibly right by its female characters.

Although the movie does feature Roberts in a leading role, its primary story revolves around two men — Clooney's Lee and O'Connell's Kyle. Roberts (or at least her voice, through Lee's earpiece) is a constant presence, but much of the movie revolves around Lee and Kyle's dialogue and interactions. This isn't a bad thing — the two actors are fantastic together — but it does that mean that the movie is primarily male-driven, a fact that might be disappointing to those hoping that a woman-directed film would put its female characters front-and-center. Yet surprisingly, Money Monster manages to achieve something many might think is impossible — it's a male-led film that features a huge range of complicated, realistic female characters who talk to each other, have relationships, and have deeply developed personal lives.

Patty might not be quite as central to the story as Lee or Kyle, but she still plays a major role, talking Lee through the situation and commanding the production room of the TV show. She's swift, sharp, and a trusted figure, someone who knows how to handle even the hardest situations with calmness and control. Her expertise is never doubted, and her employees worship at her feet; even Lee, who gently makes fun of her, makes it clear that he admires Patty tremendously. And while her backstory is never shared, little touches, like the fact that she's getting a job at another station and that she enjoys takeout and TV on Friday nights, help form her character and make her realistic.

According to The New York Times, Foster made sure that Patty was written as a fully-drawn, complicated person, and watching Roberts on-screen, there's no question that Patty is just as well-developed a character as her male peers. For some male-led movies, that would probably be enough — you put one good female character in the story (see: the Ocean's 11 movies, The Imitation Game, The Theory of Everything, etc), and then fans will be appeased. Yet Money Monster's depiction of Patty is only the start.

In addition to her, the movie features a decent amount of female characters, both in key supporting roles and minor background parts (police officers, bank employees, production assistants, and so on). This might not sound revolutionary — why wouldn't a movie with a large cast and hundreds of extras make many of them women? Yet, so many films choose to act as if the world is made up solely of men, with women relegated to love interests, secretaries, or nothing at all. Foster's movie, meanwhile, makes the effort to populate the film with a seemingly equal number of men and women, and represent the world as it truly is.

A 2016 study by the Center for the Study of Women in Television and Film reported that in the top 100 films of 2015, women comprised just 33 percent of all speaking characters, and with a statistic like that, it tends to feel like a miracle when a major Hollywood movie includes a single woman in its cast, let alone multiple ones with real jobs, full lives, and actual agency. In Money Monster, the female characters are smart, capable, scheming, hilarious, frustrating, even cruel — their personalities range the gamut, because these women are meant to feel like real, complicated humans, just like their male counterparts. They talk to each other (the movie passes the Bechdel Test with flying colors), have romances, excel or fail at their jobs, and live their lives like ordinary people (albeit ones dealing with an extraordinary situation). They make the movie resemble the real world, one where women make up half of the population.

By doing this, Money Monster makes it clear that no movie, even one with male leads, can excuse its lack of women by saying that including many of them wouldn't be realistic, or that it would detract from the story. The film's inclusion of women doesn't take away from its two lead characters; if anything, it adds to the movie's effectiveness by not making you distracted by thoughts of "wait, where are the women in this movie version of world?" Foster's film proves that it's actually quite easy to make female characters a big part of a male-driven story; directors just have to take the initiative to do it.

More like this
Sandra Bullock, Girlboss Extraordinaire
By Matt Harkins & Viviana Olen
Lydia Leonard Is Setting The Record Straight
By Olivia-Anne Cleary
How To Fight For Reproductive Rights, Based On How Much Time You Have
By Courtney Young
Lisa Marie Presley Reviewed Baz Luhrmann’s ‘Elvis’ Movie On Twitter
By Grace Wehniainen
Get Even More From Bustle — Sign Up For The Newsletter