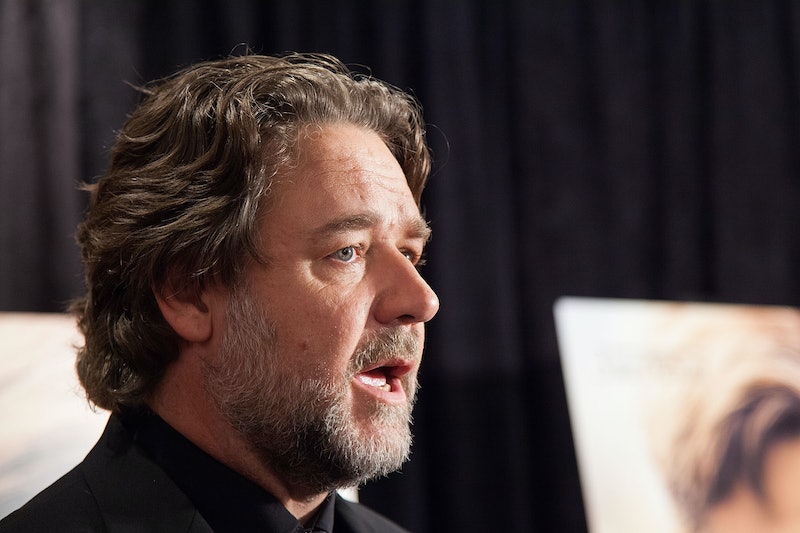 According to 52-year-old Australian actor Russell Crowe, he's been in 50 movies and television shows since his career started in the mid 1970s. That's a lot of content, and according to Crowe, part of the reason he hasn't seen every single film he's made over the last 35 years. "There's a couple of movies I've done I haven't seen," he admits. "If I'm not available for the press tour where you go to the premiere, you're not going to find me at my house going up to the shelf going, 'Hmm... What movie of mine am I going to watch tonight?' It doesn't happen at my place."

So don't expect to watch Les Miserables, A Beautiful Mind, or Gladiator at Crowe's place — that is, unless you're one of his sons. "I haven't seen [Gladiator] from beginning to end since 2001. I saw a few minutes of Gladiator recently because my sons wanted to watch it, finally, so I put it on."

Crowe has two sons, ages 13 and 10, with Australian singer Danielle Spencer. And though they are of his kin, Crowe admits that his eldest son is also his biggest critic. "My eldest has been on the internet looking into [the film] for such a long time. He knows all of the negative comments ever made about that film, and the things to look for, that you might be able to see that I'm wearing Calvin Klein underwear," Crowe laughs. Wait a second, Maiximus wore tighty whities?

"He was running a commentary through the whole film," Crowe says of watching a bit of the film with his boys. "My eldest has this attitude that I should just get used to the fact that it doesn't matter what I do, nothing I do is cool. And that's the way he says it. He just goes, 'What's your problem? You should know this. You're my father. You can't be cool.'"

Hold on. A roman gladiator isn't cool? Richie Roberts in American Gangster isn't cool? A captain commanding a war ship on the high seas isn't — OK, I'll stop. But fans of Crowe, myself included, have a hard time believing the guy doesn't do some pretty cool stuff. According to Crowe, fans approach him all the time and want to talk about "about a dozen different characters" he's played over the years. I bet they think he's cool.

"The constant is always Maximus. It's so odd because if you look now, somewhere on prime time TV, Gladiator is still showing 17 years after we made it. It's amazing," he says. "The one that gets brought up the most in terms of, 'When are we gonna get another one?' is Master and Commander, because people that love that movie also love the books. There are 21 books and there's only been one film, so it's ripe for being done again."

With so many iconic characters in his portfolio, it must get exhausting to be constantly approached by fans, but Crowe assures that it's actually quite flattering. "I was doing something for Saturday Night Live the other day, and three of these young comedian guys were sitting there waiting for a rehearsal to start and they started doing American Gangster," he says. "Like I remember my actor friends as a kid doing Taxi Driver. And these guys are doing Frank Lucas, Richie Roberts at me, you know? I was really touched. They've seen it so many times, they know it. How many times do you need to watch the bloody film to know the dialogue that well?"

Are you not entertained?! You're a living icon, Crowe, just accept it — and then invite us over for a Russell Crowe movie night already.

See Crowe's latest project, The Nice Guys, in theaters May 20.