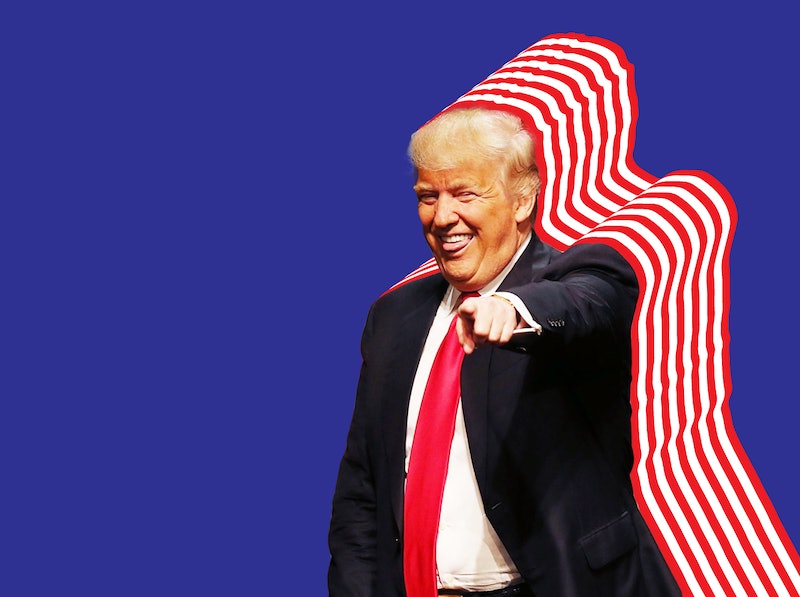 At a campaign rally in Washington last week, presumptive GOP nominee Donald Trump talked about a candidate who was "trigger happy," had a "bad temperament," and whose actions were fueling ISIS. Lest you be concerned that Trump briefly entered some sort of fugue state in which he was overcome with a fit of honesty and began describing himself, know that he was talking about Democratic front-runner Hillary Clinton. This maybe the ultimate political case of the pot calling the kettle black.

Trump roared before the crowd in Lynden, Washington:

On foreign policy, Hillary is trigger happy. She is, she’s trigger happy. She’s got a bad temperament. You look what she did, and look at this, I just wrote this down, Iraq, Libya, she voted, Iraq, let’s go into Iraq. I voted against it, except I was a civilian so nobody cared. From the beginning, I said it’s gonna destabilize the Middle East, and Iran will take over Iraq. You know, for years they’ve been trying to get Iraq and Iraq has been trying to get Iran. We decimated that country’s military. And now the country’s a mess. And what we did was, we got ISIS, they got oil her decisions in Iraq, Syria, Egypt, Libya have cost trillions of dollars, thousands of lives, and have totally unleashed ISIS.

Trump then told the crowd that he was good at watching TV.

It’s not the argument itself that’s really the problem — it’s the person it’s coming from. Clinton is seen as a hawkish candidate by many journalists and pundits — and has been for some time. She’s certainly had a difficult time defending her support of the war in Iraq, especially against her rivals — from both parties — during this election cycle. Trump, of course, once supported the Iraq war wholeheartedly as well, though he’d prefer you don’t discuss that. As for whom exactly is stoking ISIS’s fire, Clinton is at least not the candidate making cameos in the terrorist organization’s recruitment videos. She’s not the one calling for a ban on Muslims, feeding the image of America as a nation saturated with reductive, prejudicial Islamophobia.

After spending some time qualifying the notion that he liked Saddam Hussein (to protect himself from the horrible media, which, he claimed, ran "a story, 'Donald Trump like Saddam Hussein'") he seemed to lament the fact that our nation has an actual judicial process in place before we start killing people, unlike Hussein's approach, and imply that there was no terrorism when Hussein was around.

“Iraq is Harvard for terrorism,” Trump said. “If you want to be a terrorist, you go to Iraq. It’s Harvard. [Hussein] used to kill ’em. Instantaneously. And by the way, just in case you’re wondering, they didn’t go through 15 years of a court case … they killed terrorists. You didn’t have terrorists.”

Yet, he's hitting Clinton on her foreign policy? Trump may try to sell himself as a dove against hawkish Clinton, but I bet fewer people will buy this myth than Trump Steaks.