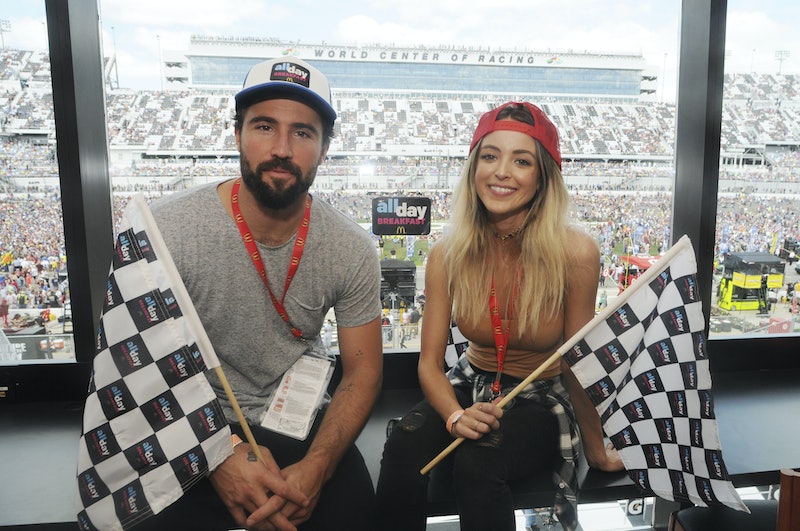 If you're from the mid-'00s MTV generation, you most definitely remember Brody Jenner as being one of the biggest playboys on reality television. He stirred trouble on The Hills with his partying and flirtatious ways, but it seem like that party boy has been tamed because Brody Jenner is engaged to Kaitlynn Carter, and they seem very, very much in love. Brody obviously has a very famous last name that is inextricably connected to his ex-step sisters, The Kardashians, so it's undeniable that fans would still connect them after these years. He used to make appearances on his step family's show but will Brody Jenner's wedding be on Keeping Up With The Kardashians ? I really wouldn't hold my breath.

Brody has had a very complicated relationship with his step sisters and his own father. Since May 2014, when he didn't attend the wedding of Kim Kardashian and Kanye West, the situation has remained a bit tense. Brody was upset that he couldn't bring Kaitlynn, who was a new girlfriend at the time, to the super intimate destination wedding. A year later, in May 2015, Brody didn't mind being a bit bitter, posting a photo of himself and his girlfriend with the caption, "Look…@kaitlynn_carter and I finally get to go to a wedding together!!!," which he later deleted. I would say, that given his obvious feelings about not going to Kim's wedding, the chances are that he wouldn't allow them to film his own wedding for KUWTK.

He last appeared on the show when he featured a few times on Season 8, mostly concerning his relationship with Caitlyn Jenner. Since then, Brody has really separated himself from his ex-step family, telling Yahoo! Style in an interview in 2015,

"I don't see them very often. I live out in Malibu, they live in Calabasas ... That's the one thing that people don't really understand is that we live two completely separate lives. And everybody ties us in together as the Kardashians and the Jenners. I mean, [Kris and Caitlyn] got a divorce, so they're not even technically my family anymore ... Growing up, we had two completely separate lives..."

Even more recently, Brody hasn't shied away from publicly speaking out about the Kardashians. Page Six reported that while at Coachella, Brody was allegedly overheard telling someone, “They’re not my f*cking family.” Ouch. While Kylie and Kendall are his sisters through Caitlyn, it seems like they are not as close to him as they used to be, but are still have love for each other. Brody told Mirror Online when promoting his Sex With Brody show last year,

"[Kendall] is incredible. It’s pretty amazing to see what she’s accomplished now at such a young age – both of them, Kendall and Kylie ... It’s fun to watch. [I’m a] proud older brother."

While I assume Kendall and Kylie would be invited and attending Brody and Kaitlynn's wedding, I am sure the producers of KUWTK would find a way to do a quick montage of the girls speaking about their brother without actually showing footage of the event. We might never know what the Kardashian and Jenner crew could be cooking up for ratings, but whether Brody's wedding is on the KUWTK or not, there will surely be drama at some point.