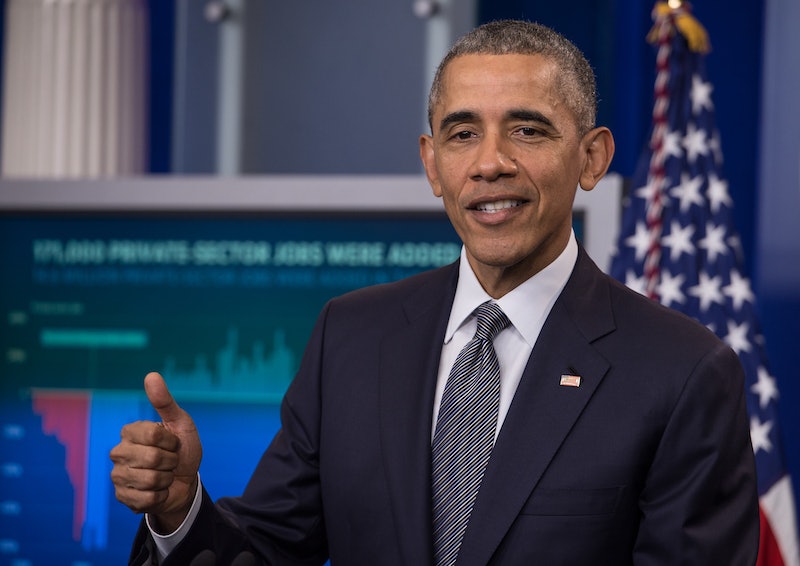 Once you hit rock bottom, the only way to go is up. President Obama seems to be applying this slogan to the Republican party — and making the not-huge leap that having Donald Trump lead your party is rock bottom. In a Thursday interview with the Rutgers University student newspaper, Obama seemed hopeful that the GOP would learn its lesson from the mess that is the 2016 election. Speaking to Rutgers' The Daily Targum , Obama said, "My sense is that there will be a corrective at some point, perhaps after this next presidential election."

Since Donald Trump became the presumptive Republican nominee, many have seen it as the implosion of the GOP as we know it. But Obama doesn't see all doom and gloom for the GOP. "Now the good news is that political parties go through these moments, and there are a lot of good people out there who are Republicans who don’t recognize the direction that the party is taking," he said. Obama was vague on what that would exactly entail, or what the right track would be.

Of course, making such a proclamation can certainly be interpreted as its own political twist on the classic backhanded compliment. It's the equivalent of when the recently married cousin you hate tells you, "Don't worry. I'm sure once you lose a little weight, you'll snap up a man!"

Obama was also, unsurprisingly, defensive and sanctimonious towards his Democrats. He pinned pretty much all the gridlock that Washington, D.C. has become infamous for under his tenure on the Republicans. Obama told The Daily Targum:

What we’ve seen within the Republican Party has been a refusal even to engage on a whole range of issues like climate change, for example, that are vitally important. The issue here has never been both sides stuck in a corner, unwilling to meet in the middle. The challenge has been a Republican party that has become increasingly ideological and extreme, and I think that’s reflected in the current presidential race.

Still, Obama did throw a few crumbs of praise and optimism towards the GOP — and actually, his logic isn't so different from that of Republicans who are still leading the anti-Trump charge and maybe even already looking towards 2020. House Speaker Paul Ryan, who is still hesitant to endorse Trump, may even agree with Obama's argument: The party needs a "corrective," and it's not a matter of if, but when.