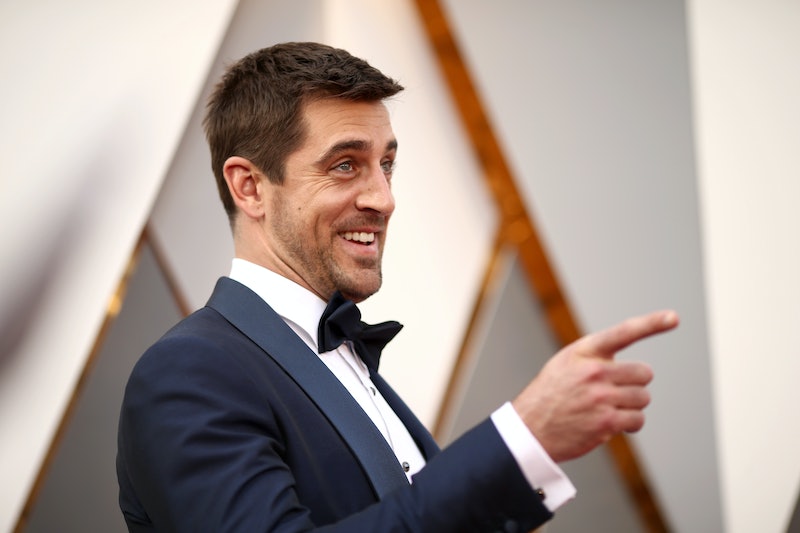 Someone please explain how it's possible that The Bachelorette's premiere is a mere two weeks away. Not that I'm complaining, it's just, where in Chris Harrison's name did the time go? In 11 sweet, short days, 26 men will compete for the love, affection, and roses of JoJo Fletcher. Amongst these strapping young suitors, lies one in particular with a pretty famous surname: Rodgers. If you're fan of the sport where people get pummeled and throw around a tan, oddly shaped ball, then you'll recognize the name instantly. Contestant Jordan Rodgers is the brother of Green Bay Packers Quarterback, Aaron Rodgers. Which really only means one thing in my head: Will Aaron Rodgers be on The Bachelorette this season? If his little bro makes it far enough, then hey, it could happen.

If you watch The Bachelor/ette then you know how this shindig unfolds. Once the final four are left standing, it's off to hometown dates. So, if Jordan makes it to that point and brings JoJo back to meet the two adults who are responsible for his existence, then it's conceivable that Aaron Rodgers will be there to fill in the "big brother/sibling role." You know, the one where he awkwardly hugs JoJo, asks her "What's different about Jordan?" and generally looks concerned about how "quick" this process is. There's a science here. A beautiful, wonderful science.

According to a quick and trusty Google search I just did (spoiler: I know nothing about football. What is football?), the 2015 NFL season ended on January 3, 2016, and the 2016 season won't kick off (puns! sports!) until September 8, 2016. JoJo started filming her season sometime in March, after the 2015 season. We know that typically speaking, filming wraps up before The Bachelor/ette premieres, because the winners are already chosen — after which they have to keep a low profile, go in to witness protection, and are advised against using Snapchat (they can thank Kaitlyn Bristowe for that one). Point being that JoJo's filming dates will not interfere with the NFL's tight sched. Making the possibility of an Aaron Rodgers cameo all the more likely.

Plus, by the looks of Jordan's newly-released Bachelorette profile and questionnaire, it looks like this one could go far on JoJo's season. Take a gander at a few of these gems: His all time favorite films are "Gladiator, Wedding Crashers, and Princess Bride," his dream job is "food critic," and the people he admires the most are "his grandparents." Sounds like the recipe for a top four Bachelorette dream boat, am I right?!

Of course, only time — and by time, I mean father time, and by father time, I mean Chris Harrison — will tell. But all you football aficionados, cross your fingers now if you want to see Aaron Rodgers on The Bachelorette. And all you other persons, cross them if you want to witness the magical matrimony of two disparate worlds — sports and love — colliding on your TV screen.