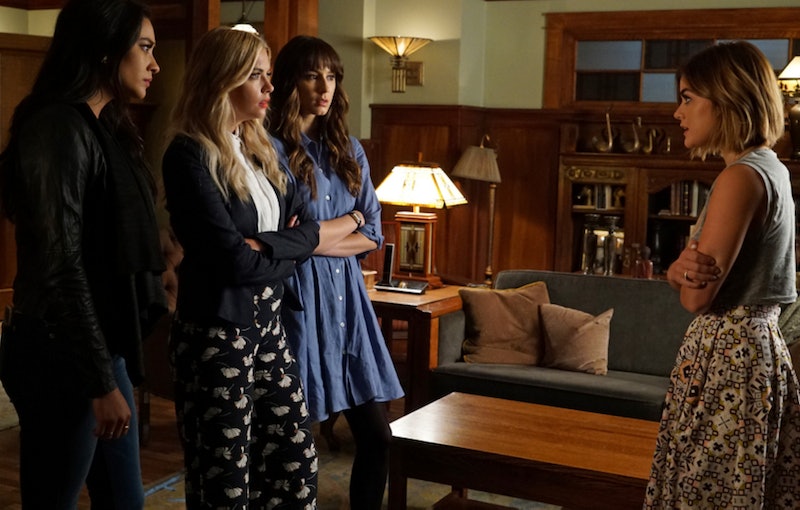 Rosewood’s prettiest and littlest liars are back, and you better believe there is plenty of mischief and mystery afoot. On Thursday, the trailer for the seventh season of Pretty Little Liars hit Instagram, and in classic PLL style, the clip raises approximately one bajillion questions. Now, I hate to play favorites, but there is one question that I simply cannot leave be: Who and/or what are the Liars burying in the PLL Season 7 trailer?

In the preview, we see a frazzled Spencer, a frazzled Emily, and a frazzled Aria digging a frazzled ditch out in the middle of the woods. It’s unclear exactly what it is they are up to, but one of the shovel-wielding ladies utters something that implies all is not well with the Liars of Rosewood.

“It was a well-thought-out plan,” Spencer says as she jams the garden tool into the soil, “but when it ends like this, it’s called murder.”

List out some guesses? Why, I thought you'd never ask:

...Ah, you caught me. That guess was a goof. Now, if I actually had to put real money on who or what the Liars lower into a shallow grave, I'd probably go with Sara Harvey. Just a hunch. Maybe she, I don't know, gets in the way of one of the Liars' many schemes and there are fatal consequences? And if the Liars do kill Sara, it'd be an accident; This is Pretty Little Liars, not Pretty Little Cold-blooded Murderers.

Aughhhhh. The suspense of it all! Pretty Little Liars Season 7 will premiere on June 21 on Freeform.