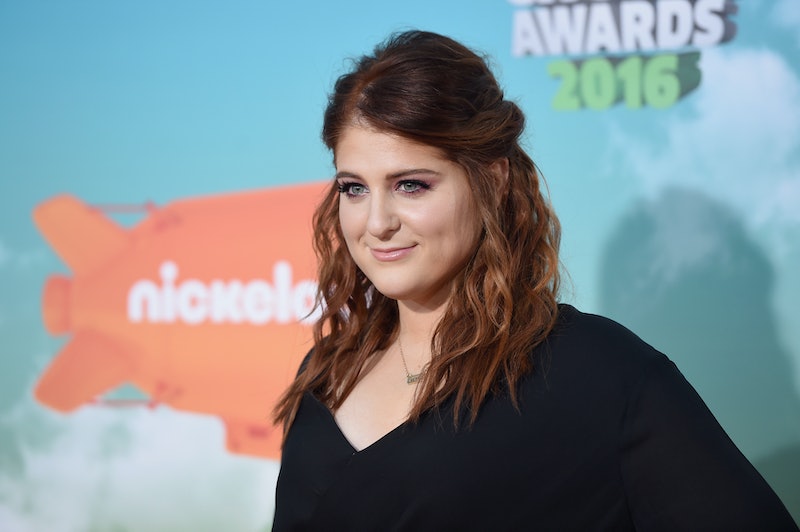 There's a brand new album out May 13 for all of us to obsess over. I'm referring, of course, to the sophomore effort from Meghan Trainor, called Thank You, which I personally am very excited about. But first thing's first — why is "Thank You" the title song on Trainor's new album? It's an especially interesting question given that, for her debut album, Trainor didn't put much thought into what she wanted it to be called, instead focusing on the songs themselves. She claimed she chose the name "Title" only because her label was putting pressure on her to come up with one, and she wanted them off her back. But, this time around, there's more meaning behind Trainor's decision, and it's actually quite a lovely sentiment.

As it happens, by naming her album Thank You, Trainor is speaking directly to you. Yes, you! Assuming you're a fan of hers, you are exactly whom Trainor is thanking with her album title. She intended it to be a sort of tribute to her fans, and how supportive they've been of her rise to fame. In a January 2016 interview with E! News , Trainor shared, "One of my songs, it’s called ‘Thank You’... and it’s a song to my fans. I want them to hear it now but I have to wait." That's so sweet. Especially now that it's finally here, and we can see for ourselves the touching words that Trainor dedicated to her fans in her lyrics.

You keep me humble, keep me focused everydayYou know how to put a smile on my faceWhen I think about you, all my worries fadeYou say you'll love 'til forever and that'll never change

I love this even more, knowing that it isn't about a boyfriend or something. It's about meeeeeee!

Oh-oh, I hear your wordsOh-oh, they don't go unnoticedOh-oh, I feel your love

It's such a sweet way to let her fans know that she sees and appreciates them, even if she can't make that crystal clear all the time because she's, y'know, an incredibly busy and talented human being trying to work for a living. But according to the lyrics, we're always on her mind.

I was already all geared up to love the album Thank You, but, knowing that it's literally named in honor of Meghan Trainor's immense gratitude for the people who have lifted her up is just the icing on the cake.