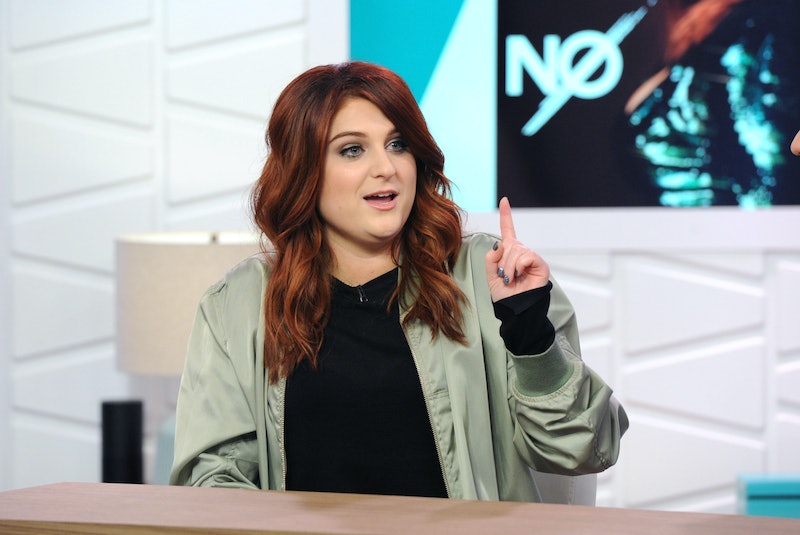 Ever since “All About That Bass” hit the radio waves as a bubblegum-y track with biting lyrics about body acceptance (or not), Meghan Trainor has cut a definite image for herself among the rows of indistinguishable pop stars. When Trainor’s sophomore studio album Thank You debuted on Friday, part of me expected that image — and subsequent sound — to follow her. But, as I’ve listened to Thank You on repeat, I grew to judge each track accordingly, finding that she got a bit experimental along the way. And, when it comes to the official ranking of songs on Thank You , it really seems like Trainor suffers most when her songs have an identity crisis.

Maybe it’s because all the music videos had such hyper-feminine aesthetics that are now hard to shake off. Maybe I was just hoping for more of that, but it wasn’t like we weren’t warned. I have to say, when the video for "NO" dropped, there was a pang in my heart because Trainor seemed to be channeling the earlier side of Britney Spears' career, and that's a risky move at best. Still, there’s some wonderful music in here, so allow me to guide you through the best of the crop, and the ones you can leave off your iPhone.

"Better" isn't terrible, but it might be something worse than that: boring. Trainer's delivery here feels especially lifeless, so you can skip this one.

Stunningly simple, with sophomoric lyrics that sound like an 8th grader's understanding of Carrie Bradshaw's prose on Sex in the City. Less puns, though, so at least there's that.

If this was sandwiched between "Better" and "Hopeless Romantic," it would probably rank higher. Unfortunately, this is supposed to set the tone of the album as the opening track, and it takes a hit because of that. It doesn't not set the tone of the album, technically; it's a song about success and gratitude, the two running themes in Thank You, but there are so many better songs about that here that it's baffling that this "Watch Me Do" was picked as track one. I'm also pretty bummed the phrase "nice breasteses" was used.

This sounds like it was composed in a smoke circle with a bunch of her besties. Maybe it was.

I really love the lyric "you can't dance to the beat of a heart that's broken." Nice. Everything else here is fine.

It's an ode to Trainor's first world problems, and how to be grateful in spite of them. Now, nobody knows first world problems like I do (I'm the girl who has her day ruined because there wasn't enough whipped cream on her frappucino), so you'd think I can relate. I'm also not, however, in the same tax bracket as Grammy Award-winning Trainor. I have Second Cheapest Bottle of Prosecco Problems at best, so you can take a step back.

The titular closing track is definitely the best of Trainor's gratitude songs. It's also, I hate to say it, nothing special? Maybe the title just happened so sum up the album best so they went with it, versus the title being the stand-out break-out hit.

So, the thing about this song is that, on its own merits, it's both dark and sweet, starting out low and then elevating into something slightly bigger. There's nothing really wrong with it. That said, you can't help but think that someone like Adele would slay with this track and just break your goddamn heart. When you put it into that context, it basically just sounds like one of us singing to an Adele song, and why you would you pick an imitation to soundtrack your latest heartache?

The tacked-on intro is pretty cool, and conceptually I love that Trainor put out a song highlighting a word most women are afraid to say. Regardless, this still sounds like a weird "Oops!... I Did It Again" redux to me.

No real complaints here. This one has a great, high energy that will get you pumped before you go out tonight.

This is such a sweet blend of pop and doo-wop; it has that light vintage feel without being outdated. Maybe I'm a fan because it conjures up Lily Allen vibes, and, while at many points in the album it seems like Trainor is trying to do an Allen thing, this is the most successful effort. Still, a mom celebratory track seems kind of... gratuitous is a strong word. Maybe a it gives this a more saccharine taste by the time it's over, and I think "saccharine" is something Trainor really has to work hard to avoid.

"Me Too" brings you to a low-key party immediately with its bouncy hook. Not a lot is happening, but everything that is happening is good. Compared to the sparse simplicity of "Hopeless Romantic," the minimalism works here. I do feel like someone's going to remix this and it'll make an amazing club hit, so I guess there could've been more going on overall.

I blinked by the time I heard the ukulele open "Just A Friend To You," like, "We're going to channel She & Him during this whole thing too?" I'm glad to say that "Just A Friend To You" actually delighted me. It manages to be simultaneously cute and mournful, if not a bit unexpected.

For so much of the album, you feel like our girl is emulating artist after artist, and it gets exhausting. You feel starved for a classic Trainor track, and, by the time you get to "Dance Like Your Daddy," it satiates that hunger. It feels so good to listen to something that's so her. Yet, at the same time, I have to knock it down a rung because the title kinda weirds me out. You don't know how my father dances.

It doesn't get any better (or more empowering) than this, folks. And we love you too, Trainor! We're glad your last album garnered you some well-deserved success, and we see that you feel thankful about you. Just follow your own words and be yourself, the best version of yourself, because that's the one who makes great music.

More like this
Harry Styles Opened Up About Olivia Wilde With A Rare Comment About "Trust"
By Sophie McEvoy
Selena Gomez Joked About Her Relationship Status In Her ‘SNL’ Monologue
By Grace Wehniainen
Twitter Has Very Mixed Feelings About The New 'American Idol' Winner
By Jake Viswanath
Twitter Is Upset About The 'American Idol' Top 3 Results: "Who TF Is Voting?"
By Jake Viswanath
Get Even More From Bustle — Sign Up For The Newsletter