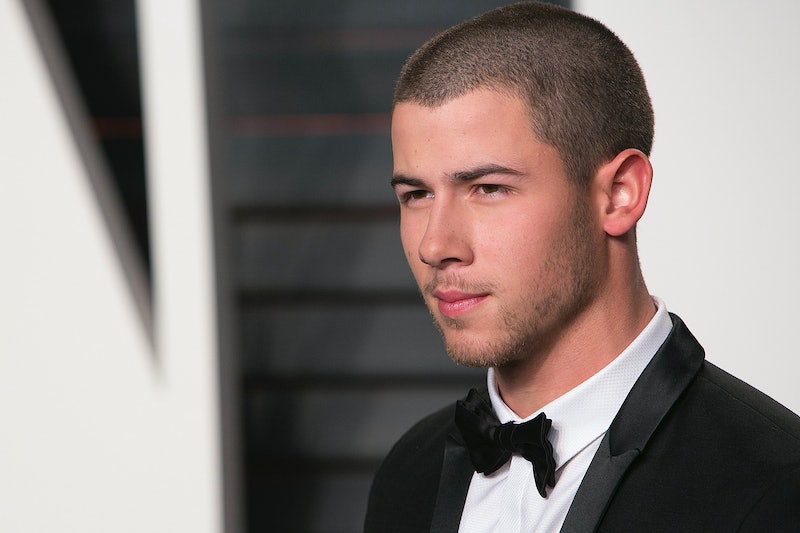 Nick Jonas has come a long way since his boy band days of singing tooth-achingly sweet love songs. Jonas' new single "Chainsaw" is a masterpiece of heartbreak that puts the focus squarely on the end of an adult relationship. It's about those painful moments when the very house you live in reminds you of the person who is no longer there, and it stings. This is as raw and real as Jonas has ever been, and it hurts so good. One look at the lyrics for "Chainsaw," and you will see Jonas' anger and disappointment dripping from every line.

The maturity in "Chainsaw" is so refreshing, even as it makes you feel compelled to send Jonas all of the virtual hugs. According to a recent interview with Out Magazine, Jonas' new album Last Year Was Complicated was largely inspired by his breakup with former Miss USA Olivia Culpo. While the breakup was no doubt a painful experience, it also seems to have led to musical growth. "Chainsaw" is the ultimate breakup song. The kind you will want to play on repeat the next time you find yourself examining how a relationship fell apart.

Jonas goes all in here, and the song is better for it. These "Chainsaw" lyrics will speak to anyone who has ever had a broken heart. Check out the song, and then prepare for some seriously gorgeous pain.

In The Closet By The Door, There's Your Coat/ I Wasn't Thinking Of You Before

"Chainsaw" is all about memories, and how they seep into everything around you. The song's intro is basically Jonas coming home, feeling fine, and then seeing something as simple as a coat his ex left behind. One object sends him spiraling out, and it's one of those lyrics that is so relatable it will make your soul ache.

Too Many Rooms In This House, So I Keep Going Out/What The Hell Is That About?

The entire song is linked to tangible reminders of the relationship, with the most symbolic one being the house itself. Without his ex, the house becomes an empty reminder of what he lost. That's a level of breakup only someone who has taken the plunge and lived with a significant other can fully understand.

He is so not over her which makes this line all the more brutal. The need to find his way back to happiness is palpable, but it's never as easy as replacing one person for another.

The push and pull between wanting to move on and hold on is tangible in this line. He could get rid of the entire house and be done with it, but that would mean he would have to admit the relationship was over. If you're not crying by now, I want to know what kind of magic elixir you are using to hold back your emotions.

The hook of the song is powerful. The images it conjures up are violent and messy, but not in a physical way. It's pure emotion, and heartbreak rarely comes out neatly. The scorched earth approach to excising someone's memory is not the healthiest move, but it is often the only course of action that feels reasonable in the moment.

"Chainsaw" is a sharp, unapologetic song about saying goodbye to the future you had planned. Jonas clearly dug deep for this song, and it paid off in a major way.

Let the replaying and weeping commence, because "Chainsaw" deserves to be at the top of your breakup song playlist immediately.

More like this
The 1st Photo Of Priyanka & Nick's' Baby Comes After 100 Days In The Hospital
By Jake Viswanath and Hugh McIntyre
Is Megan Fox Pregnant? MGK Gave A Shout-Out To Their “Unborn Child” Onstage
By Hugh McIntyre
Britney Spears Set A Wedding Date With Fiancé Sam Asghari & Previewed Her Dress
By Bustle Editors
Post Malone Reveals He’s Going To Be A Dad
By Hugh McIntyre
Get Even More From Bustle — Sign Up For The Newsletter