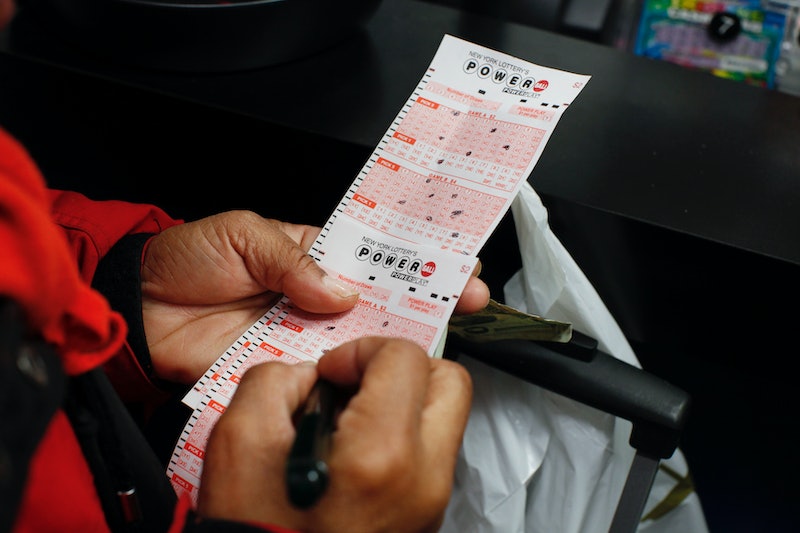 For eight New Jersey residents, Friday the 13th must feel pretty dang lucky. For less than a dollar a piece, they've all become millionaires. The $429.6 million Powerball jackpot will be shared between eight winners, lottery officials announced Friday.

"This is an amazing win for New Jersey, the lucky ticket holders, and the retailers," New Jersey Lottery Executive Director Carole Hedinger said earlier in the week at a press conference held outside the 7-Eleven store that sold the winning ticket in the state's capital of Trenton. In keeping with Powerball tradition, the owner of the store that sold the winning ticket will receive a $30,000 bonus commission.

The identities of the eight winners will be revealed by lottery officials Friday afternoon when they too are presented with a larger-than-life ceremonial check representing their jackpot winnings. According to ABC News, the eight shareholders reportedly purchased two $2 tickets — one for Wednesday's drawing and one for Saturday's drawing — with the "Power Play" option added for an additional $1 a piece from the Trenton 7-Eleven. Although their ticket for Wednesday's drawing was a dud, they more than made up their initial investment with Saturday's winning lottery ticket. It's not yet known whether the ticket purchaser picked their own numbers or opted for a Quick Pick.

Saturday's drawing was the sixth largest Powerball jackpot in the game's 24-year history and the largest jackpot ever won in the state of New Jersey by a single Powerball ticket. Despite how easy it is to play, Powerball is a tough game to win. Your odds of buying a ticket that hits the jackpot are one in more than 292.2 million. You likely have better odds winning a Kentucky Derby superfecta bet.

But it's those nearly impossible odds that make winning all the better. Should the winners of Saturday's $429.6 million jackpot opt to take the lump sum payout option over an annuity paid out over 29 years, they'll walk away with $284 million before taxes. After factoring in a 25 percent federal tax and New Jersey's three percent state tax, the eight shareholders are looking at a prize of more than $204 million. If divided evenly among themselves, each of the ticket's shareholders could take home a little more than $25.5 million dollars.

Sharing a winning lottery ticket can get complicated, even among family. On top of choosing a payout option, there are federal and state taxes to be paid and split winnings can potentially be considered a taxable gift by the IRS, which is why lottery officials advise winners to seek legal advice before stepping forward. So best of financial luck to my eight new friends in New Jersey just beginning to navigate the choppy legal waters of lottery winnings.