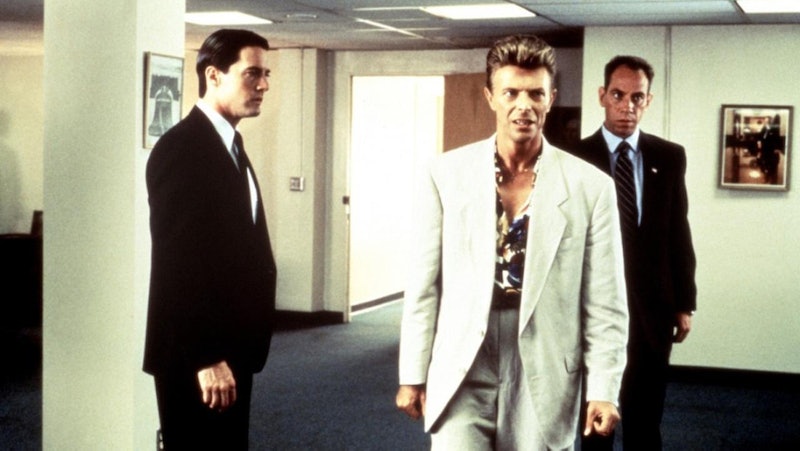 In heartbreaking news for fans of both David Bowie and Twin Peaks, it would appear that there was one vital name left off of the enormous (and surprising) Twin Peaks revival cast list that would have been spectacular to see. In an interview with the Dallas Morning News, Harry Goaz (who plays Deputy Andy Brennan in the show) revealed that Bowie was to star in the Twin Peaks revival, reprising the role he played in the 1992 Twin Peaks movie Fire Walk With Me as a cameo part. This is a crushing blow to fans of both the musician and the show, and for those who love the severely underrated Fire Walk With Me, it's a further disappointment — especially when considering the unsolved mysteries presented by Bowie's character in the film.

The actor and musician played Phillip Jeffries in the movie, an FBI agent who goes mysteriously missing whilst working on a case who unexpectedly (and briefly) reappears with frenzied, irrational tales about living "inside a dream," a woman named Judy, and about a meeting "above a convenience store." It's thought that Agent Jeffries' ramblings are connected to The Black Lodge, with the character acting as a cipher to help represent many of the supernatural elements of the realm such as the abnormal passing of time within it and the dream-like nature of it's environment. When looking a little deeper into particular theories surrounding Agent Jeffries, it's also pretty easy to hypothesize what Bowie's character could have been doing in the Twin Peaks revival.

Firstly, Agent Jeffries set up a wealth of additional mysteries pertaining to the nightmarish Black Lodge, and many of the ideas presented by the character seemed purposefully intended to be used to further explore the broader mystery of the realm in later works. Though the Judy whom Agent Jeffries speaks of was never fully explained in the movie, popular opinion from many Twin Peaks fans is that she was to be yet another missing or murdered female like Teresa Banks (Fire Walk With Me) or Laura Palmer from the original series. This also sets up a repeated pattern wherein an FBI agent (Dale Cooper, Phillip Jeffries, or Chet Desmond in Fire Walk With Me) is investigating the missing woman only to find themselves going missing or becoming severely jeopardized.

Bowie's appearance as Agent Jeffries in the new season of Twin Peaks could have been there to fit this theory, especially if the new season starts the way that fans presume it to: with yet another murdered or missing woman being investigated by a fourth agent who could also find his well being getting compromised in the process.

What seems most obvious for the part that Bowie could have been playing in the Twin Peaks revival would be for Agent Jeffries to be yet another addition to the cast of spooks and oddballs to be found in The Black Lodge. His lack of perspective when it comes to time, abnormal mannerisms and lunacy in regards to mundane, yet obviously significant, details seem coherent with the idea that he is perhaps permanently trapped above that "convenience store" where he attended that meeting.

Considering that Bowie's role was only that of a cameo, this role seems to be the most likely, popping up only to haunt and taunt those who dare to take a visit to The Black Lodge in their dreams.

It's worth considering, however, that Agent Jeffries may still be making an appearance in the Twin Peaks revival, only with another actor in the role. David Lynch is known for taking great relish in having the one role played by multiple actors, or of multiple actors playing the one role such as in Lost Highway or Mulholland Drive, and there happens to be someone mentioned in the revival cast list who could fit the bill perfectly.

Trent Reznor is a noted fan and friend of Bowie and collaborator of Lynch's, and it wouldn't be too much to assume that Reznor was possibly brought in to still play the role with the same maddening energy that Bowie gave to it. Whatever the result and whether Agent Jeffries still features in the new Twin Peaks, one things for sure — Bowie will be sorely missed when the show finally airs in 2017.