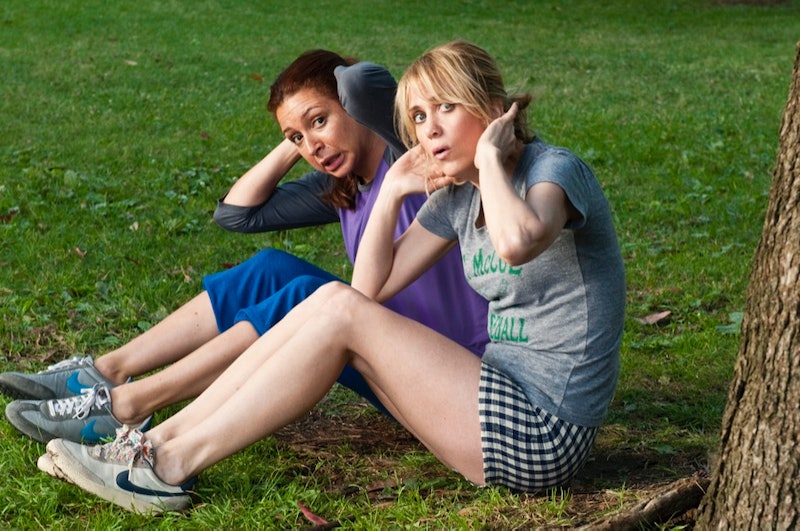 Friday, May 13 marked a very special anniversary in the film industry: it's Bridesmaids' fifth anniversary. The film was notable for a whole host of reasons (did you know it's producer Judd Apatow's highest-grossing film to date?), but the one that's stuck with me is that it's the first time I'd seen a modern day film that allowed women to be gross and funny all at once. Part of the comedy of this was found in contrast. The cast of Bridesmaids were deceptively delicate looking. Actresses Rose Byrne and Ellie Kemper in particular have a specific brand of Disney princess style cute that meant that those who had seen the posters weren't ready for the sheer bodily gore the movie unleashes: from farting to diarrhea to vomiting, this film had Judd Apatow's stamp all over it.

But five years is also an awfully long time and I'm guessing some of you haven't watched it since it was in cinemas. So, let's take a trip down memory lane to the bits of the movie you'd fast forward to anyway: the best and the most disgusting of the movie's gross out comedy scenes. Oh, and if you don't have a strong stomach? I'm obligated to warn you to click away now.

Annie Pretends To Be A Penis; Annie and Lillian "Need Dental Work"

Starting as she means to go on, Wig opens the movie with an eerily realistic impression of a penis (1:24 into the clip above to 1:40) before showing her friend why the guy she's sleeping with thinks she needs dental work (see from 2:05 on). Nothing has ever made me laugh so hard as Kristen Wiig's pretty face pretending to be male genitalia. Legitimately a zillion times funnier than any guy's impression of a penis, ever. Period.

"I've seen better tennis playing in a tampon commercial," muses Helen's teenage stepson from the sidelines. His joke is funny because it's so profoundly off-target. The way the women behave here is a zillion miles away from the sort of sanitised presentations of women's bodies you'd see in a tampon commercial, and that's why it's funny. Byrne's exactly the sort of fragrant looking female you'd expect to see in an advert for sanitary products and yet here she gets sweaty, competitive and gets a tennis ball whacked at 30 kph into her bosom.

How often do you see a drunk woman in a film whose intoxication isn't used as a catalyst for her to get angry, sexual or upset, but is just plain ridiculous? Not so often.

What You've All Been Waiting For: That Food Poisoning Scene

OK, so you're in a situation where you can't go to the bathroom. That sounds about as funny as a slap in the face. How about four women with food poisoning trapped in tight dresses in a swanky bridal shop with a white carpet? Now we're getting somewhere. Add a snooty saleswoman to the mix, just one toilet between three desperate women, and a battle of the wills between Annie, who refuses to admit that she has food poisoning, and Helen, and you've got the ingredients for comedy perfection. Lillian squatting on the street in between the cars bodily waste presumably also coming out of her "like lava" in that graceful swan-like gown has to be the crowning glory of the scene.

While Bridesmaids didn't influence female-led comedy as strongly as pundits hoped for at the time, its revolutionary female take on the male-dominated field of gross out comedy is undeniable. Perhaps what the film does best is flipping Christopher Hitchens' critique on its head. Women aren't just funny; they're actually funnier than men when it comes to gross-out comedy. The contrast between our expectations of feminine women and the reality of their human, normal, and therefore gross, gross bodies is far funnier than anything a schlubby dude with overgrown stubble onscreen can produce, because it's so much more unexpected.

More like this
Why The '365 Days' Sex Scenes Are Good, Even If The Movies Aren’t
By Arya Roshanian
Sandra Bullock, Girlboss Extraordinaire
By Matt Harkins & Viviana Olen
Long Live Bennifer!
By Allie Jones
Laura Dern Said “Cultural Awareness” Made Her Rethink This 'Jurassic Park' Fact
By Grace Wehniainen
Get Even More From Bustle — Sign Up For The Newsletter