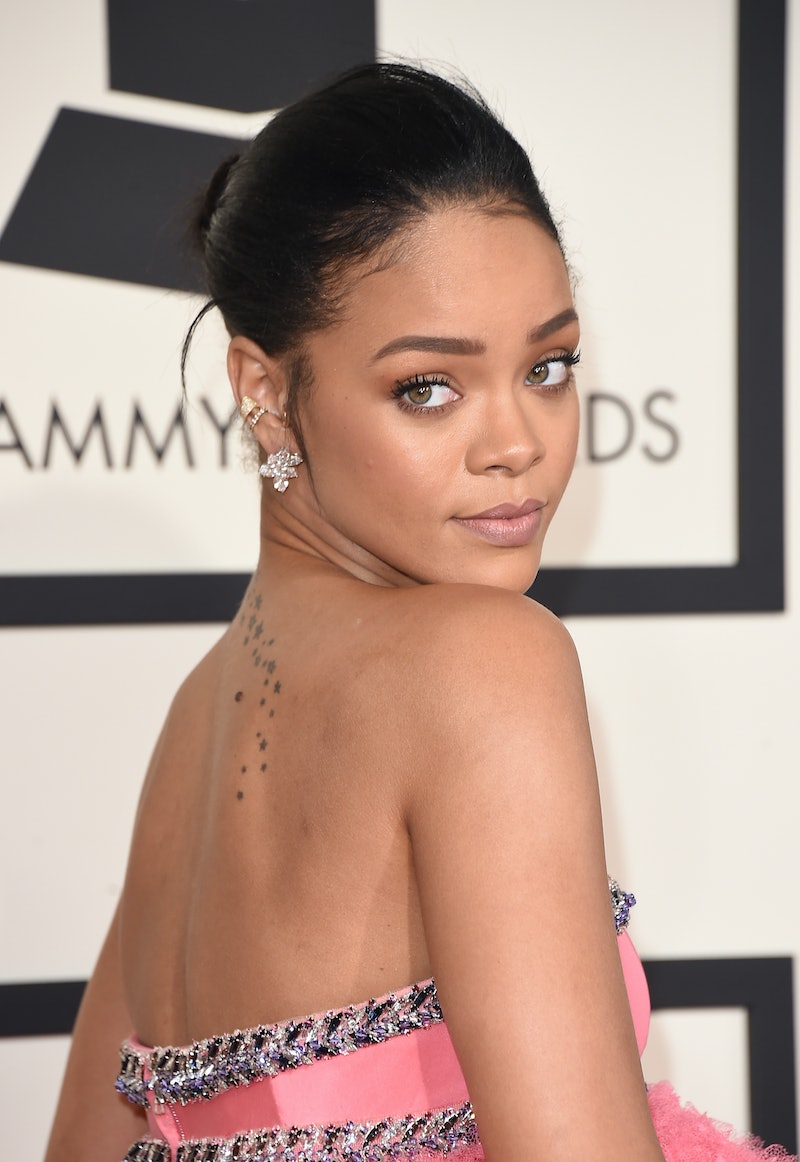 It may have been Drake who popularized the term "YOLO" as a way to express that we humans only live once (hey, that's the motto, isn't it?) and therefore, shouldn't care what our haters may think, but there are plenty of other celebrities out there who really, really don't care what anyone thinks. It's kind of refreshing, in a world where everything is given a rosy Instagram filter, to see that there are plenty of celebs who are just trying to live their lives without much regard for other peoples' opinions. Of course, some awareness of our peers and their thoughts is generally pretty normal and healthy, but when you're feeling down, it couldn't hurt to channel these celebs.

On days when it seems like everyone's out to get you, take inspiration from these fearless ladies and gentlemen who are living their best lives, haters be damned. I mean, couldn't we all benefit from a healthy dose of confidence à la Demi Lovato, or a teensy bit of DNGAF in the vein of Nicki Minaj? It's easier said than done for most, which is why it's pretty much a breath of fresh air to see several people in the public eye doin' their thang, living life as the epitome of YOLO. Get it, guys.

If ever there was the living definition of "no f*cks given," it would have to belong to Rihanna. She loves doing exactly what she wants at all times. She's one of the most famous women on the planet, with people wanting to know about everything from her love life to her next project constantly, and she's fully aware. When asked about keeping things private, Rih reportedly told V Magazine in 2015, "Do I even give a d*ck about that anymore?" proving that, clearly, she gives no d*cks either.

Cyrus shocked the world in 2013 when she performed at the MTV Video Music Awards with Robin Thicke in what is now an infamous performance involving a foam finger, and hasn't looked back since. People were stunned at the former child star's actions and look, but Cyrus has made it crystal clear in the years since then that she's all about doing things on her own terms. Immediately after the controversial performance, Cyrus told MTV,

I don't pay attention to the negative because how many times have we seen this play out in pop music? Madonna's done it, Britney has done it, anyone that's performed on the VMAs, you know? You're always going to make people talk. You might as well make them talk for like two weeks rather than two seconds. I've been laughing about all the news because everyone else is so serious.

Though I'd say two weeks is the understatement of the century, it's still obvious that Cyrus approaches life in the same way she approaches her music career: fearlessly.

She's since grown up, married, and had two children, but people frequently like to remind Polizzi of her hard-partying Jersey Shore days, taking jabs at her ability to parent, her changing look, and, well, just about everything else. Polizzi doesn't lose sleep over it, though. In 2016, she addressed her many skeptics, telling The Daily Beast, "Well, they’re idiots. I always say, what were you doing when you just turned 21? They have to think about it in their own way, instead of judging. It’s really not a big deal. I didn’t kill people. I just got drunk. Relax."

The actor turned lifestyle guru has received her fair share of criticism over the years for her lavish lifestyle, but she doesn't sweat it. In 2009, she reportedly told Elle UK , "I am who I am. I can't pretend to be somebody who makes $25,000 a year."

Gaga has always made it her mission to preach a message of confidence to her fans, and all the way back in 2009, she told Fuse, "I don't care what people think about me, I care what they think about themselves." Inspiring, if not slightly confusing, no? She was born this way.

Lovato hasn't always been the fearless advocate for self-love that she is today, and she's had a rough road to self-acceptance, struggling with mental illness and eating disorders before she found peace within herself. But now she's determined to be an inspiration to her fans and peers, telling Seventeen magazine in 2011,

I don't let anyone's insecurities, emotions, or opinions bother me. I know that if I am happy, that's all that matters to me. And it's OK to be selfish like that sometimes, when it comes to your well-being. Do what makes you happy, and don't care what others think.

The controversial rapper has never cared about other peoples' opinions, and the proof is in his music and overall attitude. In 2001, he told NYRock,

I say what I want to say and do what I want to do. There's no in between. People will either love you for it or hate you for it. That's what I've found just on a street level — fans, and people on the street. They either can't stand me or love me for telling the truth and saying what's on my mind.

In 2015, Minaj told Vogue magazine that she's all about embracing life on her own terms these days. She said,

This year, I decided that I’m going to live my life. Because I love making music but I need to live my life, and I need to realize that people are going to talk about me no matter what. They don’t know who I am. And it’s kind of sad because I’ve done so much for so many people, but I haven’t taken a moment for Onika [her real name]. But this year, I’m taking a moment before the tour. I’m going out and having fun because none of this is guaranteed. I’m not living my life for social media and people who don’t know anything about me anymore — for them to give me a stamp of approval. It doesn’t matter to me anymore.

After a columnist attacked Clarkson's weight in 2015 on Twitter, she was blissfully unaware of the vitriol she'd been sent on the Internet. When asked about the tweets by Heat magazine, Clarkson said, "I don't have a clue what you're talking about. Someone tweeted something about me?" After explaining what the tweets were, Kelly added,

Oh, and she's tweeted something nasty about me? That's because she doesn't know me. I'm awesome! It doesn't bother me. It's a free world. Say what you will. I've just never cared what people think. It's more if I'm happy and I'm confident and feeling good, that's always been my thing. And more so now, since having a family — I don't seek out any other acceptance.

OK, so the youngest in the Kardashian-Jenner brood hasn't explicitly said that she doesn't care what people think of her, but her big sister Khloé Kardashian has praised Jenner for this very attribute, in a proud, yet expletive-laced, statement on her website that Jenner re-posted on Instagram:

The newest addition to Bravo's Real Housewives franchise knew she would make waves thanks to her marriage to a much older man, music career and suggestive videos, and her overall persona. But the great thing is that she gives such few f*cks, that she wrote a song about it. Aside from that, she recently told Galore magazine,

I don’t think you live your life for anyone but yourself. You’ll never be happy if you’re constantly worried about what other people think of you. You have to be willing to take the good with the bad. Nothing worth having comes easy. It doesn’t matter what anyone else thinks of you at the end of the day.

As if there was any doubt, how many f*cks does she give? None. Not one. Zero, zero, zero. Done.

In a poignant essay for TIME, Rose describes the ridiculous backlash she received when she began dating after her divorce from Wiz Khalifa in 2014. She decided at that point to stop caring about what people think, writing,

What I’ve realized is that, when you care too much, you’re not living at your full potential. When you really stop caring about what people say, that’s when you really start living. It’s such an amazing feeling. It’s about loving who you are, owning who you are and knowing that it’s OK to live your life how you want to live it. We’re all human, which means we’re not all perfect. It’s so cool to think that I might help women think about who they want to be and then encourage them to be that person with no remorse. I want to help women just be happy in their own skin.

Though these days she's igniting Twitter with her colorful political observations and thoughts on, well, just about everything, way back in 1990, Cher was still the queen of not caring about anyone's opinions. She told Vanity Fair that she had no effs to give on everything from peoples' opinions of her dating life to her physical appearance. Of her romantic history? "I honestly don’t care what people think of who I choose to be with." On MTV banning her sexually explicit music video for "If I Could Turn Back Time"? "I didn’t care that they banned it. I really didn’t. It might not be suitable for very young children." And for the public's preoccupation with her image?

I don’t know why people are preoccupied with my cosmetic surgery. I really don’t. It mystifies me that people would care what I do to my body ... Just because you become famous shouldn’t deter you from doing what you want with your life. If you let that happen, then you become like Elvis, where you have no life at all. I’m not just talking about cosmetic changes; it translates into your everyday life.

The self-described "Unapologetic B*tch" makes no bones about being who she is and living life her way, both as an artist and as a human. In 2015, she told the L.A. Times, "caring about what people think is the death of all artists, really." She's been a trailblazer for women in music since the release of her debut album in 1983, and she hasn't toned anything down in the decades since, proving that she's serious about not just breaking boundaries, but shattering them.

So the next time you're feeling insecure, it's worth it to channel your fearless leader of choice, whether that may be Eminem or Erika Jayne.

More like this
The Best Memes & Tweets About Lady Gaga Reportedly Joining 'The Joker' Sequel
By Grace Wehniainen
Will Beyoncé Be At The BET Awards To Perform “Break My Soul” Or Attend The Show?
By Jake Viswanath
Big Freedia Reveals The Real Meaning Of Beyoncé’s “Break My Soul”
By Radhika Menon
Beyoncé Might Be Plotting Secret Intimate Gigs In The UK
By El Hunt
Get Even More From Bustle — Sign Up For The Newsletter