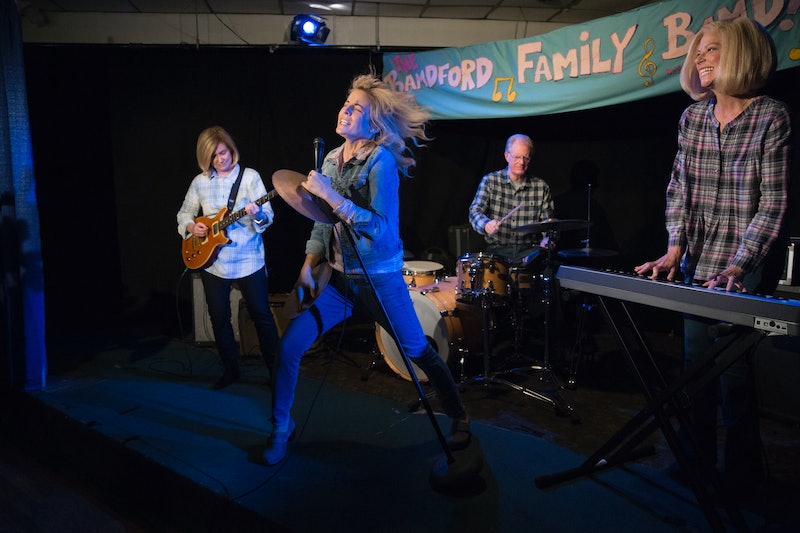 Anyone familiar with Maria Bamford's brand of comedy knows that along with openly talking about mental illness, she loves to impersonate her Minnesotan family. Don't expect that to change in her Netflix series Lady Dynamite where Maria Bamford features the state she grew up in. While most of Lady Dynamite takes place in Los Angeles, the 12-episode series released on May 20, will have "flashbacks" of Bamford in her hometown of Duluth, Minnesota, as the St. Paul Pioneer Press reported. According to the Press, Bamford suffered a mental breakdown in 2011 and her series will show a fictional account of her returning to Duluth during that time of her life to recover.

For those unfamiliar with Minnesota geography, according to Google Maps, Duluth is approximately 156 miles away from the Twin Cities of Minneapolis and St. Paul. The city of Duluth has a population of over 86,000 and is located on the shore of Lake Superior. While Lady Dynamite wasn't able to film in Bamford's hometown since the comedian told the Pioneer Press it was too expensive to film in Duluth, the Minnesota scenes were filmed in the Twin Cities for authenticity.

Bamford's biography on her website starts with the fact that she began her entertainment career at 11-years-old when she performed in a production at her Duluth elementary school, so this funny lady really does seem to love where she grew up, even if she shows it by mocking it. As you'll get to learn about Bamford's family in Duluth when you check out Lady Dynamite on Netflix, here are some other things I've learned about the city from the comedian. I present to you: Duluth, according to Maria Bamford.

Duluth Has A Library Shaped Like An Ore Boat

In a profile on Bamford from the Twin Cities Public Television series MN Original, Bamford showed her Minnesota and Duluth pride and cited some features of her hometown. Considering I didn't even know what an ore boat was before researching the Duluth Public Library, I'd say the most important fact she shared about Duluth is that they've got cinnamon rolls the size of your head! The video also includes a clip from her one-woman show Plan B, where she learned that just because you are famous and from Duluth does not mean people from Duluth will recognize you. Man, those Minnesotans are down to earth.

Speaking of Minnesotans, Bamford provides fascinating insight on the people from the Land of 10,000 Lakes. In this outtakes video from MN Original, Bamford acknowledges how on the surface, people from Minnesota seem really normal with their love of the outdoors and barbecues. Yet, underneath it all, they've got their own set of neurosis, so don't let their seemingly normal behavior trick you.

You Gotta Represent Your State

Bamford was on the live Minnesota Public Radio show A Prairie Home Companion in February 2016, which not only traditionally records in Minnesota but is hosted by Minnesota icon Garrison Keillor (she fangirled out about Keillor in the MN Original outtake video). Bamford also performed at or visited the Acme Comedy Co. in Minneapolis a couple times a years for at least five or six years, according to the MN Original video from 2010, so though she lives in Los Angeles, she has stayed true to her Minnesota roots over the years.

It's A Good Place To Get Away From Society

Before Lady Dynamite, Bamford released the web series The Maria Bamford Show , based on the similar premise that she suffered a nervous breakdown in Los Angeles and ended up moving back into her parents' home (specifically their attic) in Duluth. Although she claims in the third episode that her parents are "cramping her style," her mom — aka Bamford doing her hilarious mom impression — offered her safe space in Duluth to recover. It's The Maria Bamford Show, hey!

When Bamford appeared on The Late Show with Stephen Colbert in January 2016, she showed off her Minnesota accent in a showdown with a Late Show writer. Both Minnesotans ended up being the winners with their excellent Minnesota references and accents — and, of course, there are no losers in Minnesota. Also according to this clip, Bamford's hometown gave her the super power of being able to de-ice a windshield in less than 20 seconds!

In her interview with Colbert, she told him how she goes back to her home every three to four months. While she is speaking specifically about her family being "lots of fun," I feel there must be something pretty damn special about Duluth based on the outrageously talented Bamford's connection to it.

While I don't think you'll be itching to book your next vacation in Duluth, Minnesota, I can guarantee you'll want to hang out with Bamford there some day after checking out Lady Dynamite on Netflix.