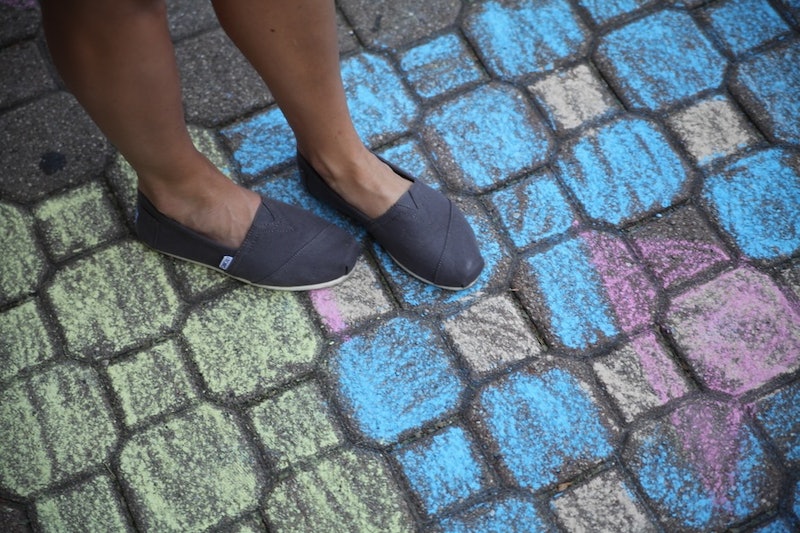 Next time you’re having a conversation with someone, stop for a moment and check out what your body is doing to supplement the conversation. There are things your body language can say about you that you may have never realized before, but these non-verbals could be speaking volumes to those people you’re interacting with. Even if you think you’re hiding an emotion well — let’s say you’re really nervous, for instance — it might be showing through the way your body is reacting to the situation at hand (e.g., shifting your body weight). Similarly, yet on the positive end of the spectrum, you might be showing how confident you are without knowing it (e.g., standing in a power pose). Regardless, there are countless things your body is saying to those around you, so let’s talk about some of them.

I am always interested in becoming more knowledgeable about myself as a person, and I’m sure I’m not the only one who feels this way. Body language is such an unique and fun way to learn about ourselves and how we react during various times — including during our interactions at work, home, and with the people we like or don’t like. Our bodies speak a language all their own, and what they’re saying to others might actually speak louder than the words we’re verbalizing during conversations. To get a deep dive, I rounded up some insight from those who’ve studied the topic and are experts in the field. Here are 13 things your body language says about you, according to experts.

1. The Way You Blink Could Indicate A Lie

Think you’re an expert at lying? Think again — the way you’re blinking could be tipping people off to your fibs. According to a study published in the Journal of Non-Verbal Behaviour ­and reported on by The Telegraph, liars will blink infrequently when they’re telling the lie. Then, immediately after the lie is spoken, the liar will speed up their blinking rapidly — by about eight times the speed of their usual blinking. One of the study’s authors, Dr. Sharon Leal, told the outlet, “The reasons why there is a flurry of blinks after the lie is not really clear. It may be that this flurry is a kind of safety valve, like a release of energy after the tension of lying.”

I spoke to Vanessa Van Edwards, behavioral investigator, founder of ScienceofPeople.com, and Udemy.com instructor, via email to get some insight into reading body language. Van Edwards says the more open someone’s body language is, the more more-minded they feel, and the opposite is true as well. “We have three different body ‘windows’ – the legs, the torso and the head,” Van Edwards notes. “Anytime something is blocking one of these windows it usually means someone is holding back, less relaxed or trying to protect themselves.”

Van Edwards says an example of this is when we cross our legs tightly or tuck our feet behind a chair leg. This could signify you’re subconsciously holding back from those around you.

Building on the knowledge Van Edwards bestowed on me on how each of us might be blocking certain body windows, let’s talk torso for a second. What little things do we do with our body is block the torso, and therefore show that we’re holding back? “We can torso block when we cross our arms or hold our purse, laptop or drink tightly in front of our chest,” Van Edwards says.

4. Covering Your Eyes Can Also Mean You’re Blocking People Out

Lastly, Van Edwards says we can even “eye block” people from us by rubbing our eyes, putting our hands over our mouth or resting our chin in our hand. “If you want to be more approachable, friendly and inclusive try to always keep your body language open,” Van Edwards adds.

5. How You Smile Can Tell If You’re Really Happy Or Not

I never for a second think that people are able to tell if I’m smiling for real, or if it’s fake. However, there’s a clear sign that can tip people off to the fact that your smile isn’t genuine. According to Anita Barbee, a professor of social work at the University of Louisville, in Kentucky who spoke to Real Simple on the topic, true smiles only come in one form — one where eye muscles are engaged. If you’re holding a grin with just your mouth, your smile can subtle be shouting “fake!” to those around you.

6. A Hand On Your Heart Can Mean You’re Being Truthful

When you’re making a promise, you place your hand over your heart for a reason — it signifies that you’re vowing to be truthful. In the same vein, placing your hand over your heart when speaking can tell your audience the same thing. CBS News spoke to Patti Wood, an Atlanta-based consultant who teaches people about body language, who said a hand on the heart can show sincerity.

7. Some Hand Gestures Can Allow You To Come Off As ‘Warm’

I’m Italian, and for me the stereotype of talking with plenty of hand gestures rings very accurate. That said, I was interested to learn what Van Edwards had to say about what our hand gestures could be saying to those around us. “If you are a hands talker and like to use lots of animated gestures when speaking this can be seen as very warm,” Van Edwards says. “We like to see people’s hands and listen to people who explain ideas with their hands and their words.”

8. But Too Many Hand Gestures Can Make You Appear Frazzled

However, before we start amping up the hand gestures in conversation, we should be mindful that overdoing it can send a completely different message. Van Edwards says too many hand gestures can make you come across as disorganized or frazzled. What’s the perfect amount of hand gestures, you might ask? Van Edwards notes the ideal hand gestures happen in what she refers to as the “strike zone.” “This is the area of your body right in your torso — like someone is pitching you a ball,” Van Edwards explains. “When we keep our hands visible and expressive in this area, it makes us warm, but not too out there. So use your hands, but don’t use jazz hands.”

9. Shifting Your Weight Can Show Nervousness

This makes complete sense, right? In fact, when I’m talking to someone and they keep shifting their weight from foot to foot it even makes me as the listener nervous. Carol Kinsey Goman, a psychologist and author of The Nonverbal Advantage, spoke to CNN on the topic, and explained, “The way you move your body reflects your attitude.” Specifically, she noted that shifting weight —whether side-to-side or rocking front and back — can show to your listener(s) that you’re nervous or upset.

10. A Power Pose Can Make You More Powerful

According to research out of Harvard Business School on power posing, standing in your best power pose can make you more likely to perform well in work environments, more likely to get hired in job interviews, and can make you more confident, just to name a few benefits. If you’re standing naturally in a power pose, you might be a whole lot more confident on the inside than you may imagine.

Next time you’re hanging out with your crush, take a look down at your feet. Are they facing towards him or her? Not surprising, if so. Prevention spoke to Lillian Glass, a human behavior and body language expert, who said your toes tend to point directly towards people you’re interested in.

12. Oppositely, You’re Feet May Turn Away From Someone You Don’t Like

The flip side is true, as well, according to Prevention. The outlet also spoke to Jow Navarro, retired FBI agent and author of the international bestseller, What Every Body Is Saying , who said, “If you're in a room with someone you don't like, you won't scowl or make faces because you don't want to come off as insensitive or mean, but your feet will almost immediately turn away from that person.”

13. A Hand Up Might Mean You’re Dodging An Attack

When your hand goes up in an interaction, it could have more meaning than you thought. In fact, according to Wood’s interview with CBS News, the backward hand flip is something we do to fend off an attack from the other person. In other words, it’s a defensive move.

As you can see, each of us might be saying countless things with our bodies to those around us without even realizing it. Take note of how your body responds during conversations, and you might learn a lot about yourself and what you’re feeling at any given moment.