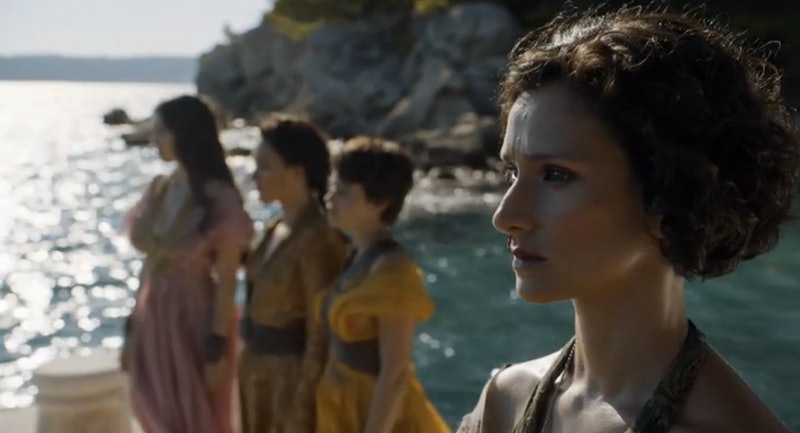 It's no secret that HBO's Game of Thrones TV series has deviated — sometimes wildly — from George R.R. Martin's source material. One group of A Song of Ice and Fire fans have launched a Game of Thrones Kickstarter to fix the series' representation of Dorne. The crowdfunding campaign hopes to raise $20 million "to write, produce, and distribute a 'Dorne Replacement,'" which will "patch" HBO's version of the sunny, southern desert to align its portrayal with Martin's books.

The Fixing Dorne Kickstarter isn't the first to lay criticism against HBO for its portrayal of Dorne. In the books, Jaime and Cersei's daughter, Myrcella, hasn't been assassinated, and her father has had no reason to launch a rescue effort. On the contrary, some Dornish folks wanted to upset Tommen's reign and put his sister on the Iron Throne!

Similarly not-dead-in-the-books is Prince Doran, the leader of Dorne, whom Ellaria Sand murdered. Ellaria, the leader of the all-female assassin band, the Sand Snakes, is another point of contention for A Song of Ice and Fire purists. In the books, she's a much softer character, whose thirst for revenge is quenched when everyone who had a hand in killing her lover, Oberyn, and his sister, Elia, are dead. That's already happened, but TV Ellaria is still raging her blood feud against the remaining Lannisters.

So, yes, the Fixing Dorne Kickstarter does have a purpose in trying to correct this particular Game of Thrones subplot. The founders' hearts are in the right place, and they have a plan. The campaign page lays out exactly how their version of the Dorne storyline would progress, as illustrated by some quite lovely storyboard images.

If the campaign to fix Dorne reaches its astronomical funding goal, the Kickstarter page promises delivery of a Season 5 correction in May 2018, barring "any dramatic legal hurdles, or other delays."

Stretch goals include bringing in actors Alexander Sidding (Doran), Jerome Flynn (Bronn), and Nikolaj Coster-Waldau (Jaime) to reprise their roles, as well as a proposal to give Martin $7 million "to use at his discretion if he will canonize [the] project as the 'real' adaptation of the Dornish plotline from page to screen." And, of course, "[f]or 50 million dollars [Fixing Dorne] will release a patch that makes it so Ned Stark is still alive through at least Season Five."