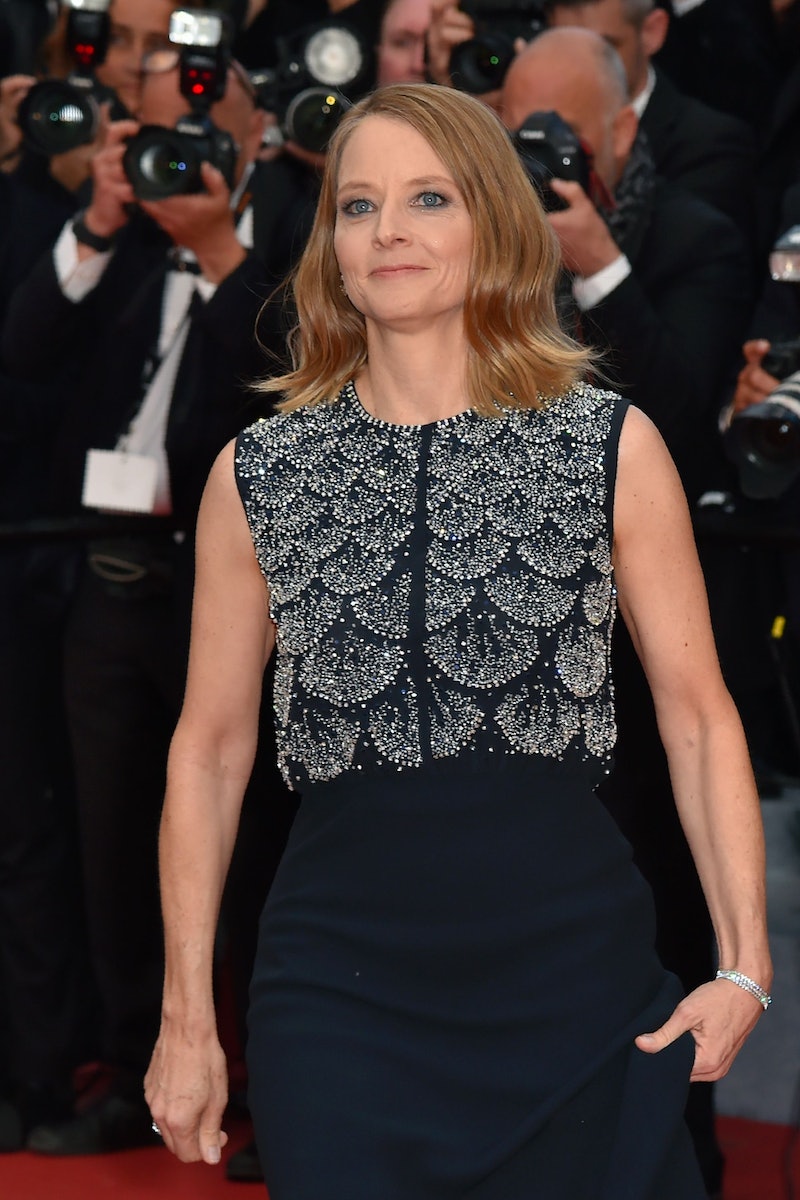 Jodie Foster has been making headlines at Cannes over the last few days. She's been promoting her latest directorial effort, Money Monster, which has received positive attention for its treatment of its lead female character, as well as it's timely discussion of national financial quandaries. She also took time to sit down for the Women In Motion panel at the festival. The panel consists of a series of talks with female Hollywood heavyweights, including Foster, Geena Davis, and Salma Hayek. As the first guest in the series, Foster offered up some candid thoughts on male writers, who, in her eyes, still seem unable to create "complex" female characters.

She stated that "men were not interested in any 'complex merging' with a female character," giving roots to the notion that some female roles simply lack depth because male writers cannot personally access the female psyche in the way a woman writer can. Foster cited her encounters with roles that included rape as a device for female characters as one of the reasons writing for women characters needs to be stronger:

If you really got to what was the overriding motivation that that woman that you found out at the end, it was always rape because for some reason men saw that as — they did — they saw that as this incredibly dramatic thing.

Foster's observations highlight one of the core problems with equality and fair treatment of women in the film industry. Reductive devices like rape have a long history in film, so it stands to reason that if women are actively pushing for industry parity, film needs to concretely move away from these habits. There needs to be a large, more tangible push towards bringing complex roles for women to the big screen. We do have a small ray of hope where male writers are concerned: In recent memory, there has been a trend of male writers who delivered well-rounded female characters. I can point to Rey in Star Wars: The Force Awakens, Furiosa from Mad Max: Fury Road, and Edith from Crimson Peak as recent examples of this possibility.

At the same time, Foster's call for more women writers to bring forth these more complex female characters is not a new issue by any stretch. Luckily, there are women continuing the tradition of great female screenwriting and working to keep the shifting perspective alive. If we again scan just through films released in 2015, there are some great highlights: Phyllis Nagy's adapted Carol screenplay let its female leads access wells of emotional depth instead of being reduced simply to lesbian archetypes. Amanda Silver was one of two writers on Jurassic World, arguably having a hand in letting the film's women live a little. Nancy Meyers (The Intern), Marielle Heller (Diary of a Teenage Girl), Annie Mumolo (Joy), Abi Morgan (Suffragette), and Kay Cannon (Pitch Perfect 2) are just a few of the female screenwriters who wrote complex female characters that also garnered positive reactions from critics and audiences alike. The best part? This list is just a portion of the female screenwriters working today.

Foster continues to be outspoken about inequality in the industry, and I love seeing her continue to deliver some realness to these long-simmering trends in film. It's time we really shook things up once and for all when it comes to writing female roles.